Does the Falcon 9 v1.1 form a shock diamond when in flight?

How does the Falcon 9 v1.1 form this exhaust pattern with its nine Merlin 1D engines? Is it a bigger, rougher shock diamond? I am trying to learn more about how one could form with a cluster of engines. 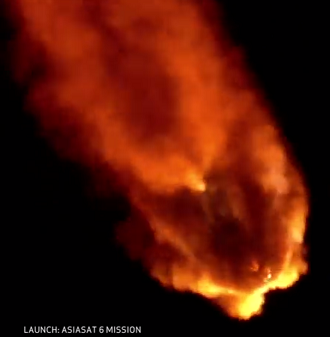 Aft end of the Falcon 9 v1.1 a minute or two into the launch.

The OctaWeb design of Falcon 9 v1.1 actually forms a crude approximation of an aerospike nozzle when all engines are firing. To understand why the exhaust plume looks like that in the photo, its important to understand how rocket engine bells works. 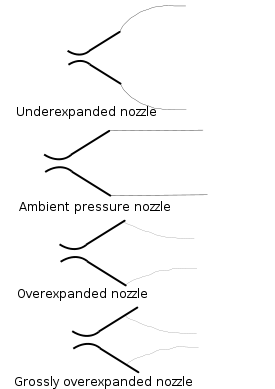 The first nozzle is underexpanded, where the exhaust gas pressure > ambient air pressure. This means that when the exhaust gases leave the nozzle, some of the gas expands perpendicular from the thrust vector and thus does no useful work on the rocket.

The second figure shows the ideal expansion nozzle, where gas is expanded so that exhaust pressure=atmospheric pressure and all of its kinetic energy is heading out directly away from the rocket.

The third figure shows an overexpanded nozzle where exhaust pressure < ambient pressure. The exhaust is compressed by the ambient air and loses some efficiency.

The fourth figure shows a grossly overexpanded nozzle where exhaust pressure << ambient pressure. This can lead to instability as the exhaust is separated from the walls of the nozzle.

The ideal scenario is exhaust pressure==ambient pressure, however this ideal scenario does not happen often. Rockets are used to go to space, and as they rise in altitude the ambient air pressure decreases. Therefore a nozzle that is 'perfect' at sea level will be underexpanded as the rocket flies. Most rocket manufacturers design their first stage engines to be slightly overexpanded so that they will be in the ideal range as they gain altitude.

One way to combat this however is to use a variable geometry nozzle to stay in the ideal range for as long as possible. An aerospike is a form of variable geometry nozzle and can be considered an inverted rocket nozzle. Fuel is injected along a cone (toroidal) or a wedge (linear). Ambient pressure and the walls of the spike create a virtual nozzle to expand the gases. This engine type will be more efficient because the expansion ratio changes with ambient pressure since the ambient pressure is what is expanding the gases in the first place. 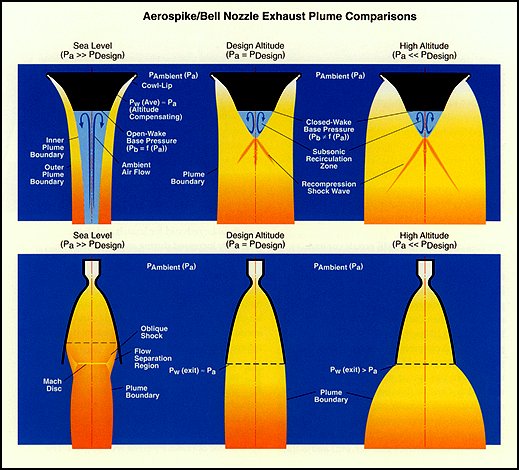 So now back to the Falcon 9 v1.1. The Merlin 1D-Sea Level is slightly overexpanded at sea level. As the Falcon rises, it reaches ideal expansion then becomes underexpanded. The 9 engines in the OctaWeb create an aerospike-like effect where the 8 engines on the outside ring push the air away from the center engine and create a region of low pressure. At takeoff, the middle Merlin is actually producing more thrust than the rest of the Merlin's due to this effect. The plume in the photo is the underexpansion of all engines combined.

Not the answer you're looking for? Browse other questions tagged propulsion spacex engine-design falcon-9 physics or ask your own question.

13
What are the differences between the Falcon 9 (1.0) and the Falcon 9 (1.1 or F9R)?
25
When SpaceX claims to build 4 engines/week, which engines do they mean?
5
When the CRS-6 Falcon 9 first stage hit the ASDS, did the Flight Termination System explode due to the heat of the fire?
12
How long does it take to build a Falcon 9 Rocket?
24
What makes the Merlin vacuum engine so deeply throttleable?
6
Falcon 9 Merlin engine thrust vectoring