Does the ISS team plan cargo flights when at half crew on purpose?

A number of times now, the cargo vehicles (Dragon, Cygnus, or HTV) seem to have arrived while the station was between crew switchovers.

With indirect crew handovers, three crew depart in a Soyuz, reducing ISS Crew size from 6 to 3, and a week or two later another Soyuz launches with a crew of 3.

What I have noticed is that a couple of times now, cargo missions have docked, while running a crew of 3 only. Since the cargo vehicles implies additional work. (They only stay docked about a month, on the US side, since with only one primary CBM port available (Harmony nadir. Harmony zenith is secondary) See Will the ISS need more docking ports for details.)

With only a month on station, there is a fair bit of cargo to unload, store somewhere (Tracked of course, else no one will be able to find anything), then refill the vehicle with downmass (Dragon only) or trash (Cygnus, HTV, Progress, ATV). There are requirements to balance the mass on reloading, so it is non-trivial.

But is there a reason? Perhaps the schedule is so tight on the Visiting Vehicle Schedule they cannot 'waste' the two weeks when the crew is reduced?

Harmony, where the CBM for cargo docking resides, is really central to the station, (you must go through Harmony to get to Columbus (ESA module), Kibo (JAXA module) and rest of the station. So maybe a crew of three is easier, since there are fewer people in the way? Or moving cargo disturbs fewer people or experiments?

While I don't have a complete answer I thought I'd share what I've found in the hope that someone can come up with something better.

I can find nothing online about exactly how and why the visiting vehicle schedule is constructed (Although this could simply be my poor google-fu skills). One thing that is clear is just how tightly packed the schedule is. Here is an ISS vehicle schedule from NASA covering expeditions 10-41 (10/16/04-09/25/14). And Here is a schedule until mid 2020 complied from various sources.

I also came across a good graphic that shows the visiting vehicle schedule from the beginning of the station to mid 2013. 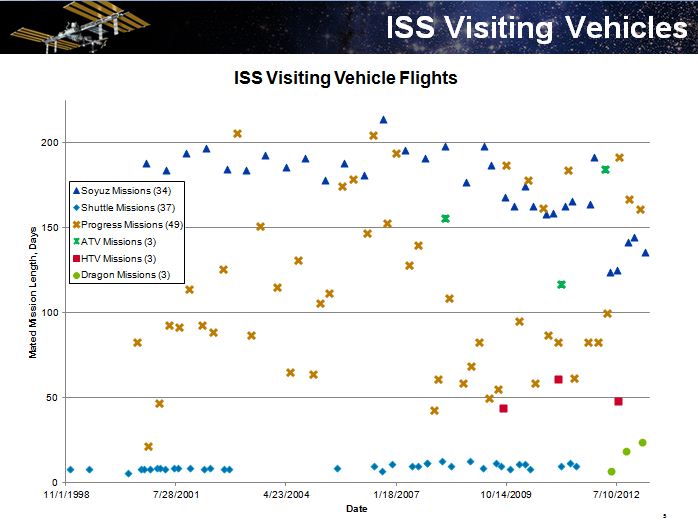 There have been numerous instances where a launch has had to be delayed because a vehicle lost its slot in the schedule. perhaps the most interesting is when ATV Jules Verne had to wait on-orbit for STS-123 to leave the station before docking.

Probably the most useful document I found is "Operations Planning for the International Space Station" by the ESA Directorate for Technical and Operational Support. It details how operational plans are constructed, but doesn't contain enough detail to directly answer the question.

Finally there's this document that, while it doesn't help answer the question, does include a huge amount of detail about the resouces available on ISS.

In conclusion I think it is very unlikely that these missions were targeted for a time when the station was half-crewed, I think it's far more likely that it's just a product of coincidence and a full schedule. That said I can't find a definitive statement confirming this.

Not the answer you're looking for? Browse other questions tagged iss spacex docking jaxa cygnus or ask your own question.

32
Will the ISS need more docking ports?
9
How much crew time is required for visiting craft, at the ISS?
15
How many docking/berthing operations can a CBM port tolerate?
10
If NASA's plan is to launch 4 astronauts to the ISS on CCtCAP vehicles, why design for 7?
16
Can Dragon, or Dragon V2 be used to boost the ISS orbit?
15
Can a Boeing CST-100 be used to provide station reboost?
12
What will be NASA Policy on backup ISS docking/berthing ports, once commercial crew is up and running?
8
Why do we have so many different spaceships to refill ISS?
2
Can an ISS berthed vehicle remotely unberth?