Why the non-symmetric design of rocket nozzles?

Although I have seen many perfectly symmetric nozzles, I have also seen designs such as this (Virgin Galactic) which is only symmetrical about one axis: 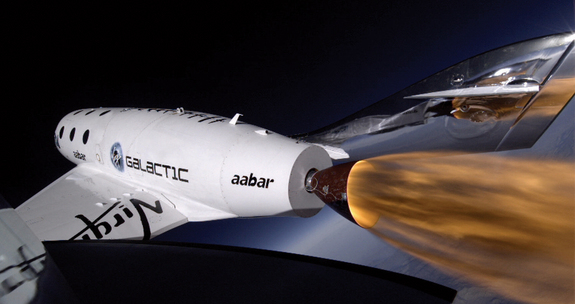 According to comments on this thread, the shape of the nozzle on SpaceShip Two is to provide "free pitch-up" during the short powered flight period. That nozzle shape would direct thrust force downward slightly, under the craft's center of gravity, causing it to slowly rotate nose-upward. Presumably modifying the nozzle shape was easier than tilting the whole engine, and the nozzle can be customized for different flight profiles (i.e. more or less fuel carried on a particular flight).

In this video, you can see the pitch-up maneuver during the powered burn from roughly 0:30 to 1:00. Ordinary aircraft achieve pitch-up by using control surfaces (elevators/elevons), but using these creates drag. Directing the rocket motor thrust instead gives a pitching force, with less drag.

Not the answer you're looking for? Browse other questions tagged rockets propulsion engine-design engines nozzle or ask your own question.

2
Why is SpaceShipTwo's nozzle scarfed?
4
Are there rocket nozzles that use non-elliptical shapes?

17
Why is (conventional) ramjet not used for 2nd stage of rocket propulsion?
36
Why do rocket nozzles flare?
4
Are there rocket nozzles that use non-elliptical shapes?
6
Why do many ablative nozzles use phenolic resin and not some other resin?
5
Why were later Russian engines inferior to the NK-33?
5
Contracting rocket engine nozzles
6
Are nuclear thermal engine designs limited to about twice the Isp of existing chemical rocket engines? If so, why; what's the limiting factor?
8
What is the purpose of the shrouds surrounding these rocket engines?