Why do Canopus Star Trackers track Canopus? Why not so Sirius?

Question: Other than their namesake, why do Canopus Star Trackers track Canopus? Why not Sirius, or a bright planet? Planets have ephemerides and spacecraft have computers, so what were all the attractive aspects of choosing Canopus above all other possibilities?

Related: How did the Canopus Star Tracker work? Are there any still out there in service today? (they are still in use today!) 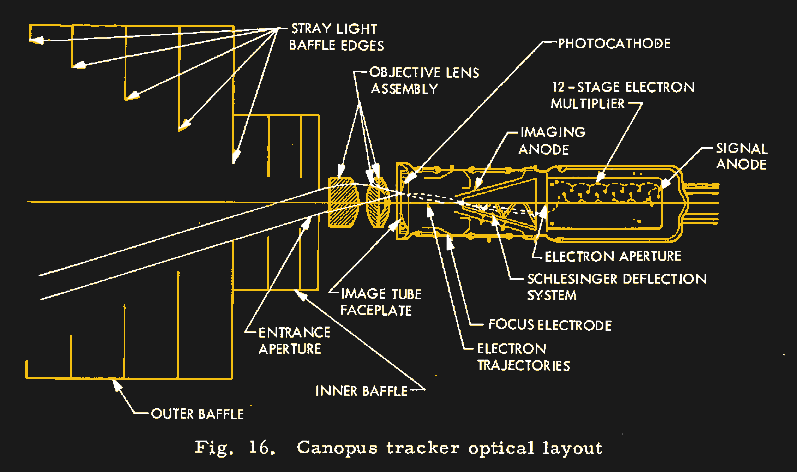 As someone who has designed a Canopus tracker, it's really very simple. The Sun is generally the easiest thing for a spacecraft to orient to, regardless of orbit or location in the Solar System. So, once you've found the Sun, orient your spacecraft accordingly. You usually have solar panels that you want oriented toward the Sun, radiators oriented away. Maybe other such constraints, too. But you may also want to know your roll angle around the spacecraft-Sun axis.

For a spacecraft near the ecliptic (nearly all of them), the handiest thing to use is a bright star at high ecliptic latitude. If it's at low ecliptic latitude, like Sirius, its angle to the axis varies a lot, but an object at the ecliptic pole is always ~90 degrees from the Sun. This makes it reasonably easy to protect the sensor from being blinded by the Sun, and it simplifies the search: the spacecraft can scan a narrow strip on the sky to find the object. Canopus is the ideal object1.

Note that the issue isn't damage to the sensor: it's not hard to design a sensor that won't be damaged by direct Sun exposure unless it's on the Parker Solar Probe. High sensitivity isn't required. But, of course, if it's swamped by sunlight it won't detect the star.

1As noted in comments, Canopus is at -76° ecliptic latitude while Sirius is at -39° putting them at 14° vs 51° away from the poles of (perpendicular to) the ecliptic.

This answer assumes that the spacecraft is in an orbit which is mostly aligned to the ecliptic plane.

A target, whose orbit is also close to the ecliptic plane, can occasionally go in front of the Sun or behind it. In both cases, the star tracker camera should not point towards the Sun, even by accident.

It may damage the sensor.

Planets orbit the Sun and have complicated apparent movements. Compared to that, stars can be assumed to be inertially fixed. Computation becomes much easier. No ephemeris needs to be stored.

Canopus's brightness and location well off the ecliptic make it useful for space navigation. Many spacecraft carry a special camera known as a "Canopus Star Tracker" plus a Sun sensor for attitude determination.

Canopus seems to have a significant declination (latitude, not declination; see the other answer) (approximately 52°) which makes it well separated (angular) from the Sun. So it is safer for the tracker camera.

It is the second brightest star in the night sky. Sirius is the brightest.

As pointed out by asdfex, Canopus is farther away from the solar system compared to Sirius. 310 light years versus 8.6 light years. This means that the apparent angular position change (parallax) for different points on the spacecraft orbit will be smaller for Canopus.

Not the answer you're looking for? Browse other questions tagged history attitude-determination-and-control star-tracker or ask your own question.

6
How did the Canopus Star Tracker work? Are there any still out there in service today?

15
Why does NASA use the position title "Pilot"' for crew members who are not in charge of piloting the spacecraft?
13
Why did Neil Armstrong alone, not NASA, end up coming up with the first words uttered on the moon?
5
Flat-spin transition manoeuvre: why is the angular momentum not constant?
2
Saturn I's four outer engines' gas generator exhaust, why not vent to the side like the four inner engines?
0
Why do these two Hubble Space Telescope star cameras point in nearly the same direction, and what's the other window for?
3
What is the math behind satellite star trackers?
6
How did the Canopus Star Tracker work? Are there any still out there in service today?