What are these two little valve stem-like projections from the Northrop Grumman STAR 15G upper stage rocket motor? Why doesn't the STAR 20 have them?

The propellant each stage will use has a long flight history for solar system exploration, having been used for the Surveyor lunar landings in the 1960s and on the Pioneer 10 and 11 and Voyager 1 and 2 spacecraft missions to the outer planets and reaches of the solar system.

The STAR 15G rocket motor was designed and qualified during 1997 in two different grain design configurations. The motor design was based on the ASAS 15-in. diameter development motor that was used to evaluate design features and component and material technology in seven tests between December 1988 and June 1991. Northrop Grumman employed its Thiokol Composite Resin technology on this motor, one of several STAR designs to use a wound graphite-epoxy composite case.

The motor’s unique regressive thrust-time profile is an example of propellant grain tailoring to restrict thrust to maintain a low level of acceleration to the payload. An alternative propellant loading of 131 lbm was also tested during qualification.

The specifications in the catalog say:

which makes me wonder (without any knowledge) if those two 12 cm long stems that look like valve stems on large truck/tractor tires might be related to ignitors.

I looked at the STAR-20 image and there are no such structures. 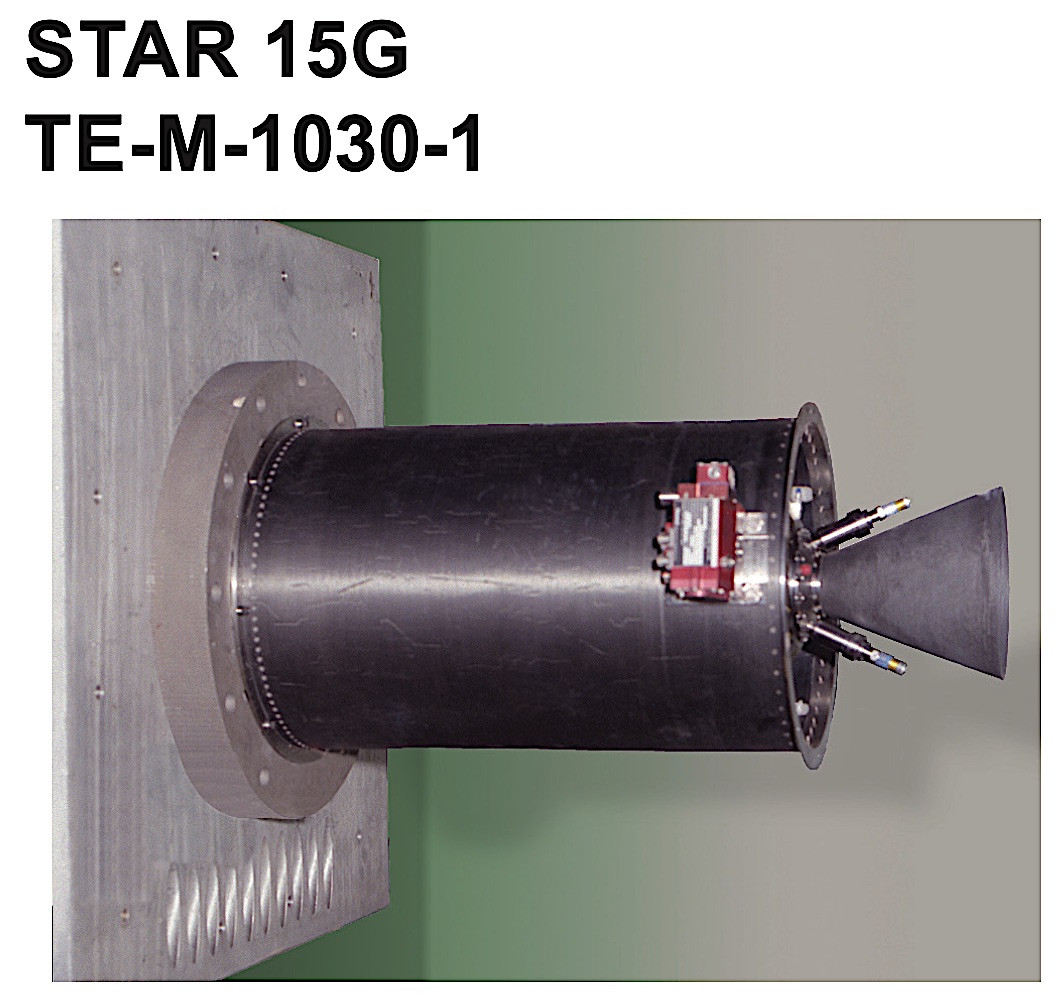 above: Screenshot cropped and amateurishly sharpened from the PDF catalog for the STAR 15G. below: Similar but no sharpening for the STAR 20. 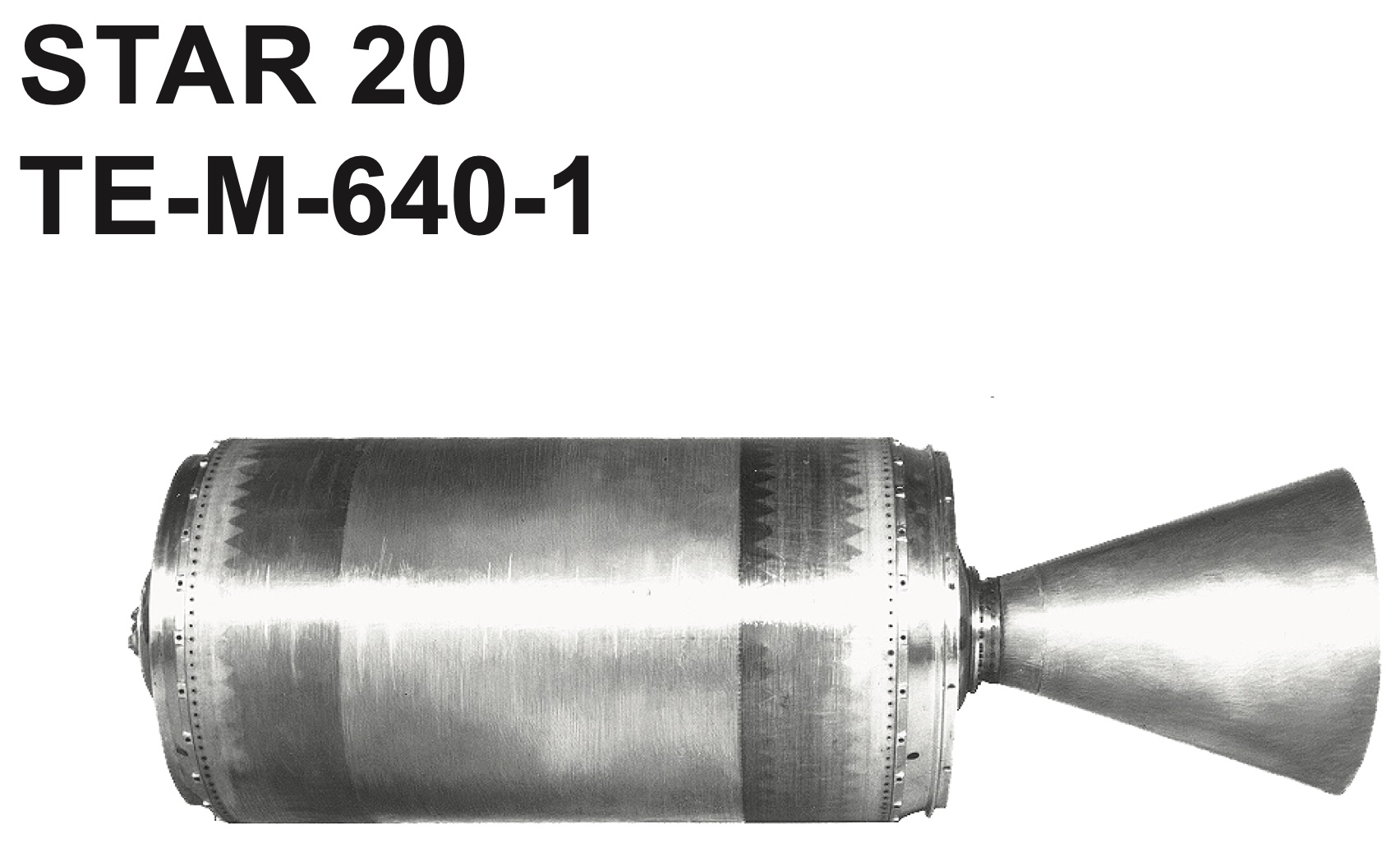 Note many other motors in the catalog have those features (non exhaustive list: STAR 13B, STAR 17A, STAR 27H) 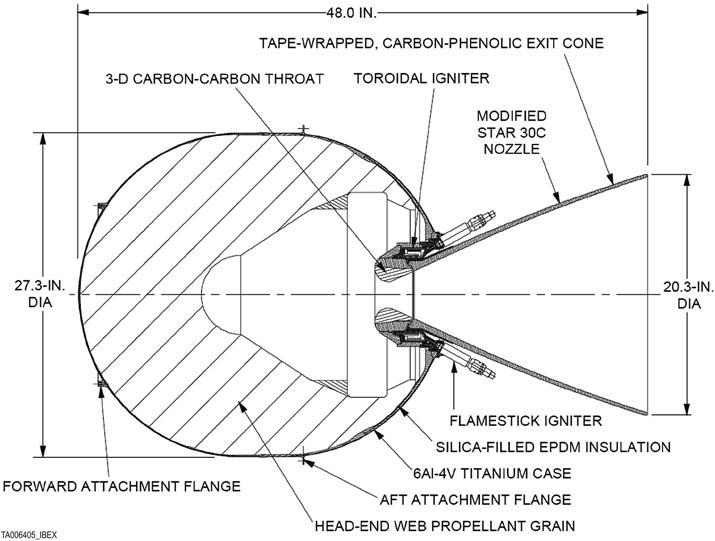 The other motor presumably has an igniter mounted at the other end of the case - that may be the fitting barely visible at the left.

12
Why do the shapes of these two exhaust plumes from an Atlas V 411 look different?
2
What are these mysterious white star-like dots near MU69 Ultima Thule? Real objects near the asteroid, noise, cosmic rays, or something else?
0
Was the Titan SRM thrust vs time curve engineered to allow for acceleration switches to initiate staging sequence events?
1
What cubesats are these, what flags are on them, and why? What's the background story?
0
Why do these two Hubble Space Telescope star cameras point in nearly the same direction, and what's the other window for?
4
What are these two devices extending from each end of the Progress MS16 cargo ship's solar panels?
7
What is the purpose of these three taut cables near an ISS astronaut during EVA? To what do they connect and why do two appear intertwined?
13
What parts of the InSight lander are missing between these two photos?