I've read the space-shuttle hold-down clamps would be released once all engines registered 90% of nominal thrust.

I know how unlikely it is that the engines would all reach >90% nominal thrust unless they had been purposely fired for launch. But still: might the controls software have imposed a second condition that the launch vehicle be in a specific launch program... just as an added safety measure?

Also! Would there have been a delay between the "all-engines >90% nominal" and the release of the clamps, e.g., to allow them to settle at 100% (or 104% in the space shuttle)? And would there have been a more stringent third condition that all engine thrust readings be within a small margin of each other (e.g., 0.5 %) in order to minimize pitch and yaw moments in this vulnerable stage of the launch?

Correcting a couple of misstatements in the question:

Now, to the answer:

Nothing can stop us now...except a thousand things.

He was right. Far, far more checking was performed than the simple "3 engines at 90%" test.

Even though the ground-based Ground Launch Sequencer (GLS) handed off control to the onboard Redundant Set Launch Sequencer (RSLS) at T-31 seconds, the GLS continued to monitor roughly 1500 parameters and could stop the count if any Launch Commit Criteria was violated.

The ground controllers could also stop the count manually.

A final command was issued from the GLS to the RSLS at T-10 seconds "Go for main engine start". If any LCCs had been violated up till then, the command would not have been sent.

Even after the main engines were started at T-6 seconds, checking continued. If the internal checks of the engines resulted in a "Major Component Failed" or "Engine Limit Exceeded" status, the engine would be shut down or would not start. (This happened five times in the program - the five shuttle "pad aborts").

This graph shows that the engines reached 90% in about 4 seconds. This allowed over 2 seconds of run-time over the launch commit criteria limit as well as allowing the shuttle stack to rebound from the start transient (the "twang"). 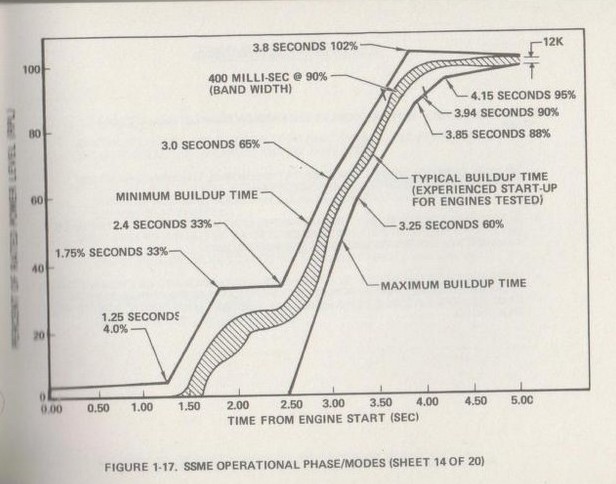 Addressing "And would there have been a more stringent third condition that all engine thrust readings be within a small margin of each other (e.g., 0.5 %) in order to minimize pitch and yaw moments in this vulnerable stage of the launch?"

If any of the engines was not running at a chamber pressure very close to what was commanded, the engine controller would have emitted a "Major Component Failure" response, resulting in a pad abort. Checks between the engines were not performed.

If the onboard computers were not in the proper major mode, not only would the RSLS not have started, but the countdown would have been stopped by the GLS. The OPS modes were not separate programs.

31
Do rockets leave launch pad at full thrust?
25
What is a "Major Component Failure" referred to in news reports about the unsuccessful Space Launch System core stage test firing?
16
Why did the SSMEs gimbal during ignition?
10
What holds the Space Shuttle orbiter itself stable on the launch pad?
5
NASA's RS-25 Engines

5
What would be the implications of high-altitude or catapult launch for orbital rocket?
45
How hard would it be to fly a Space Shuttle again?
4
How much fuel/oxidizer was held in the piping of the Shuttle orbiter?
4
Why doesn't Ariane-5 lift off at T=0 seconds?
3
Launch escape trajectory
2
Identifying attitude control mode in GNC software?