Could this three-thruster spherical spacecraft de-tumble itself with zero final velocity?

@Joshua's answer to What is the minimum number of RCS thrusters capable of stabilizing a satellite against an arbitrary rotation? begins:

I know this question is old, but I randomly discovered a solution requiring only three thrusters on one thruster block that works if we don't mind introducing small transverse velocities.

The question is quite interesting and as yet I don't think there's a proof that two thrusters could not do it.

@Joshua's representation is shown below.

Question: Assuming a spherical cow spacecraft has a block of three thrusters at a point on its surface, all pointing tangent to the surface spaced at 90 degrees, the object is "at rest" in some frame, and assuming plenty of delta-v available, could they: 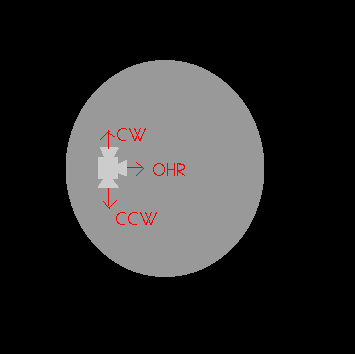 13
What is the minimum number of RCS thrusters capable of stabilizing a satellite against an arbitrary rotation?
6
Does a single off-axis thruster firing continuously eventually stabilize attitude gyroscopically?

3
Could protons in the Sun's solar wind be used to create a photonic laser thruster for a spacecraft?
6
Can we go anywhere in space with only THREE reaction wheels and ONE chemical thruster?