What type of battery technology does Mars Odyssey use?

The Mars Odyssey orbiter is currently the longest-serving spacecraft at Mars. Launched and put into service in 2001, it continues to take infrared pictures and gamma-ray spectra of the Martian surface, and (most importantly) is one of the most active relay satellites for the lander (InSIGHT) and rovers (Curiosity and Perseverance) on the surface.

It's orbit is sun-synchronous and it has solar panels, so theoretically it should continuously get solar power. However, one would expect a battery backup, and 20 years is a long lifetime for most battery technologies. Does Odyssey have batteries, and what type are they? Do we know how well they still work?

The NASA Odyssey Launch Press Kit has a bunch of info, including the electrical power system. It seems to have a nickel-hydrogen battery.

Nickel-Hydrogen Batteries have the "distinctive virtue ... [of a] long life", but a cursory search of NASA's Open Data Portal doesn't seem to show anything relevant to Odyssey's current battery status.

Odyssey flies in an orbit nearly over the poles and synchronized with the sun. For most of its first six years at Mars, the orbit was set at about 5 o'clock, local solar time. At every spot Odyssey flew over as it made its dozen daily passes from the north pole region to the south pole region, the local solar time was about 5 p.m. Beneath the south-to-north leg of the orbit, the time was about 5 a.m. That orbit provided an advantage for the orbiter's Gamma Ray Spectrometer to have its cooling equipment pointed away from the sun.

Later, Odyssey worked for three years in a 4 o'clock orbit. [...] This timing, however, added stress to Odyssey's power system. It put more of each orbit into the planet's shadow, where solar panels are unproductive. After providing radio-relay support for the 2012 landing of NASA's Curiosity Mars rover, a maneuver set Odyssey on a slow drift to later times of day to help preserve the spacecraft's aging battery. [emphasis added]

This indicates that the battery was at least healthy enough to be a part of normal operations (used every orbit during eclipse) until late 2012. The 4 o'clock orbit (and 16 hrs antipode) has parts in Mars' shadow whereas the 5 o'clock (and 17 hrs antipode) does not as shown by this diagram I made of Mars solar time (400 km orbit height according to Wikipedia): 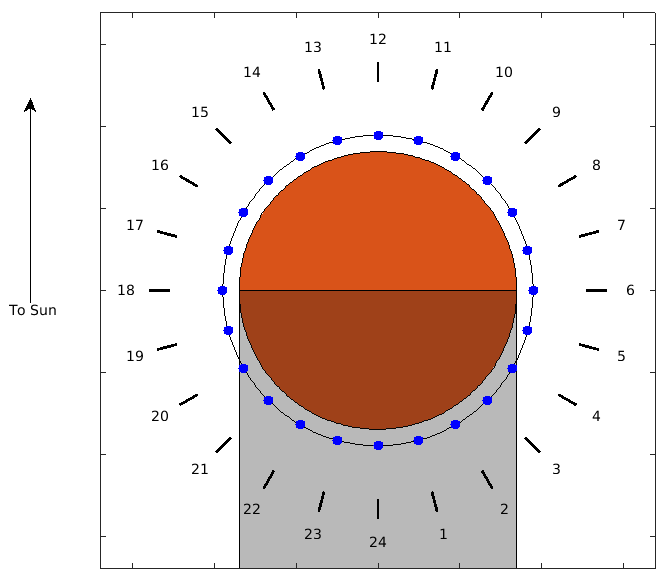 Not the answer you're looking for? Browse other questions tagged mars artificial-satellite battery or ask your own question.

7
Why (the heck) did Tianwan-1 insert into a low inclination orbit then execute a plane change from 11.8 to 86.9 degrees?

9
Would a GPS type system on Mars really need a ground station?
2
Protecting technology from radiation on mars
4
What type of software is used to make radiation shielding simulations for use in Space or Mars?
2
Why does the SEIS require a bellows type wind cover?
0
What secondary science payloads deployed from primary science payloads were strictly battery powered?
7
Will there be a command moratorium for Mars spacecraft again in 2021?