How were the Skylab solar panels stored and deployed?

Skylab had two sets of panels. A pair of main arrays provided most power; one tore loose during ascent, and the other (shown on the right side of the photo below) was tangled in debris until repaired by the first visiting astronauts. The telescope solar arrays (the X shape on the left side of the photo) also provided power.

How were the two sets of panels folded before launch, and how were they deployed? The telescope array looks like it maybe was accordion-folded and tucked next to the telescope. I'm not sure how the main arrays were folded, but its boom looks like it folded down next to the body. In any case, I'd like a reputable source, and pictures would be especially helpful.

Related: How was the Skylab 'parasol' deployed?

(After 13 days, no one has answered this question, so I researched it myself.)

According to Skylab: A Guidebook,

Solar energy is the prime source of electric power on Skylab. Two systems of solar-electric cell arrays, one on the Workshop [OWS] and one on the Apollo Telescope Mount [ATM], will be deployed after the Skylab cluster has reached orbit. The OWS system consists of two wing-like structures which are folded and packed against the Workshop wall during ascent. The ATM system, folded in a similar way during ascent, deploys in the shape of a four-bladed windmill (Fig. 131). 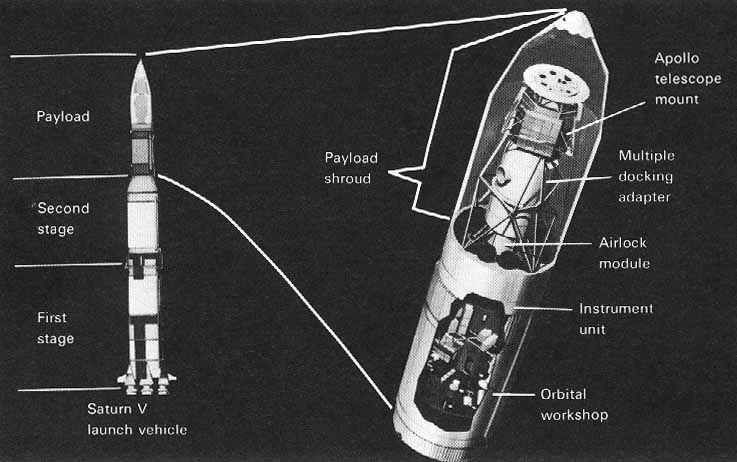 Once in orbit, the payload shroud is ejected. The ATM rotates 90 degrees on a pivot (clockwise on the picture below, annotations mine). 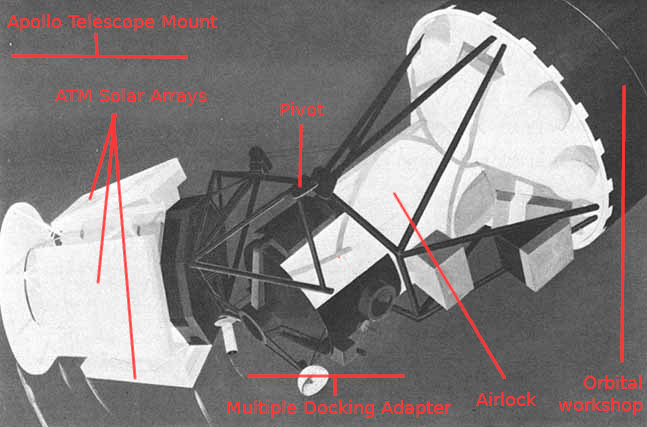 Then the wings are extended by a scissor mechanism. The panels themselves form one side of each scissor. The drawing below is poor quality, but you can see the accordion pleating of the wings:

Each workshop solar wing extends from a beam, which is attached with a hinge near the forward end of the orbital workshop. At launch, the beam is folded down and becomes part of the outer trimline of the vehicle. Various sources specify that the solar panels are somehow folded under the beam before launch, but no source explains or shows exactly how. My educated guess is below.

An accident during the ascent of the station tore off wing #2, and jammed wing #1. When the first crew arrived, they took the following picture of wing #1 (annotations mine): 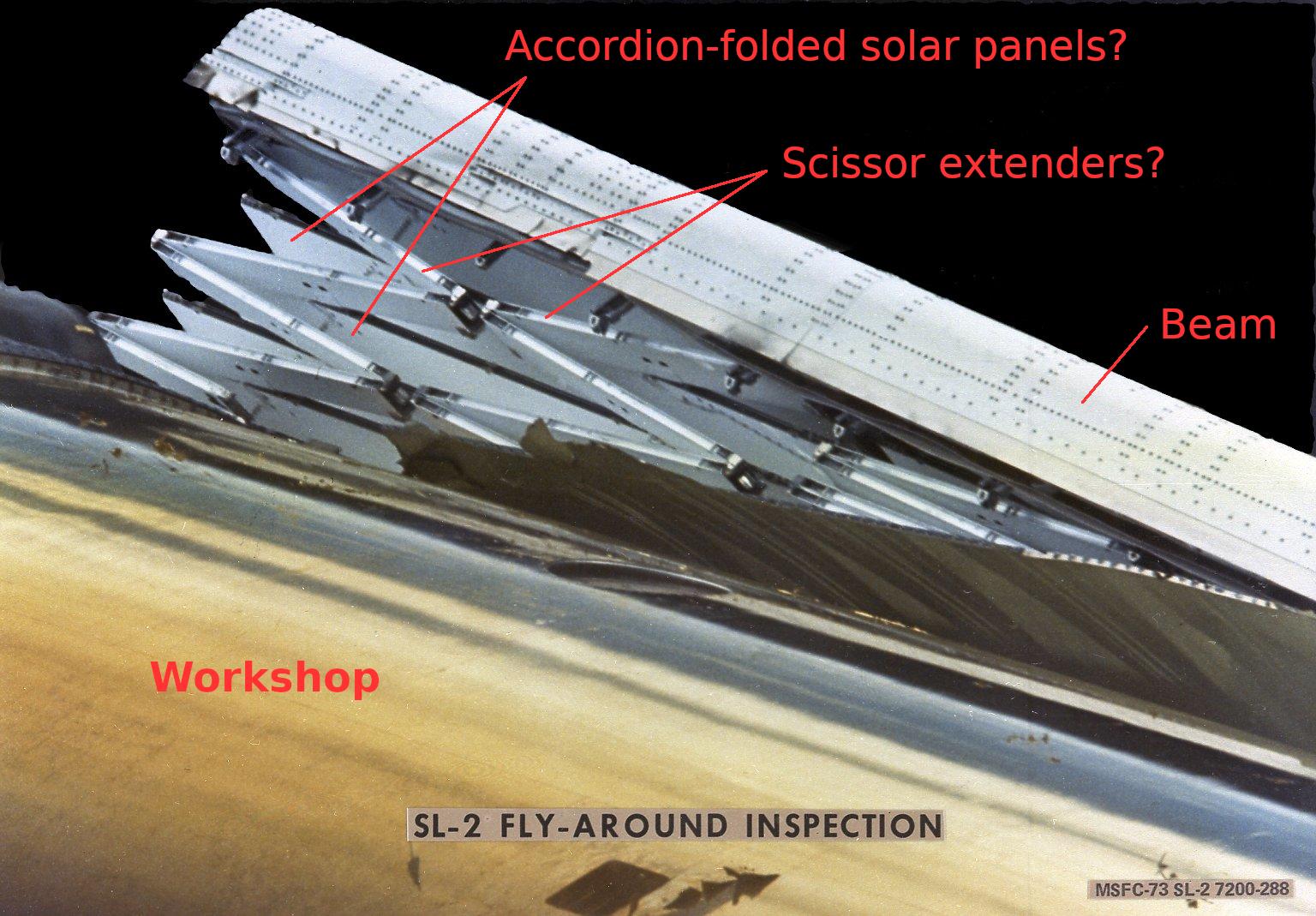 The National Air and Space Museum has a copy of the orbital workshop and its solar array: 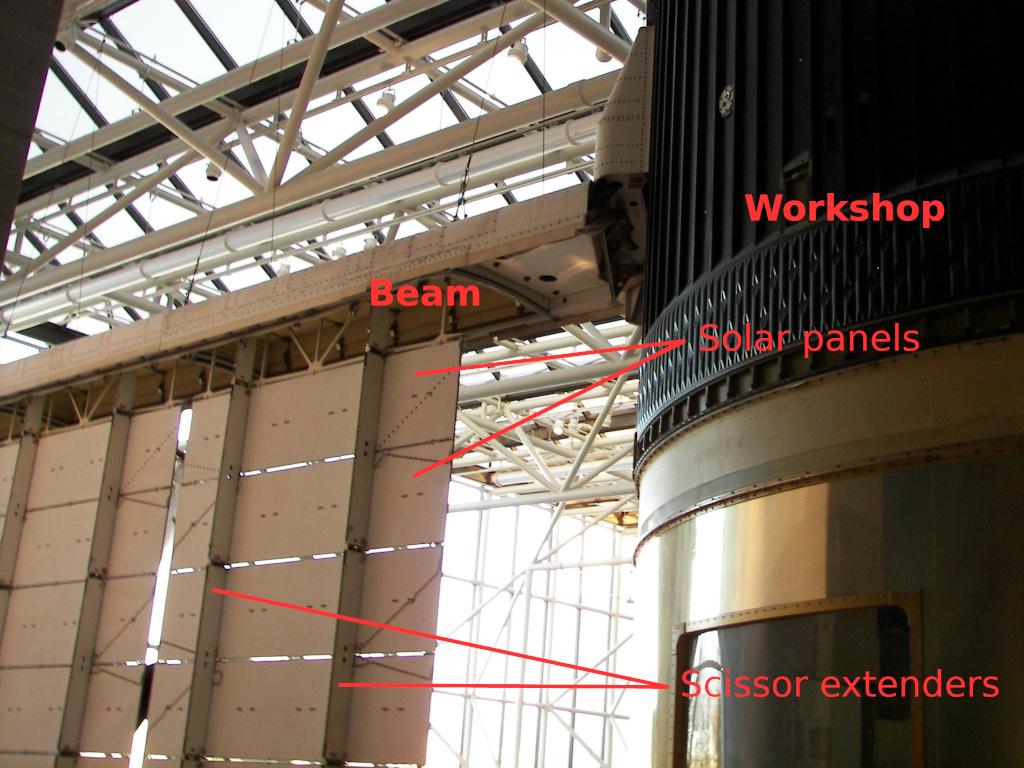 (Something else I learned during this research was where the control moment gyros were located. I had always assumed they were somewhere in the body of the station. They are actually located in the Apollo Telescope Mount -- which makes some sense because it is the part of the station that demands the most precise attitude control.)

12
How was the Skylab 'parasol' deployed?

6
What were the characteristics of the Apollo Skylab CSM white paint?
5
How are the silicon PV cells constructed in the ISS's solar panels? Are they as flexible as they appear here?
31
How was the Skylab Rescue mission supposed to return 5 astronauts?
3
Colors of the ISS solar panels?
53
Is the Skylab 4 mutiny just a myth?
10
At what altitude did the Skylab space station disintegrate?
12
How was the Skylab 'parasol' deployed?
6
Largest solar panel (by area) deployed in space? Largest below/at/above GEO?