How reflective can laser sail coatings be?

A recent post mentions that laser sails, in contrast to solar sails, can cherry-pick coatings that are near-perfect reflectors in narrow frequency ranges.

But how good is "near-perfect"?

Looking for highly reflective coatings, dielectric mirrors show up a lot, offering five 9s of reflectivity for narrow frequency ranges. But I have no idea if this is something that can be used for sails.

How reflective can sail coatings be when considering constraints like sail manufacturing and practical frequencies for lasers? 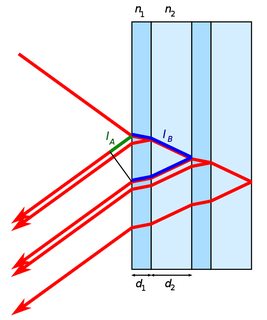 Incident angle has significant effect on the response of dielectric stack reflectors, and sail deviations from flatness and spacecraft attitude excursions affect this.

There are two reasons that angular deviations degrade reflectivity and enhance transmission:

If the whole spacecraft tilts and the one hundred million lasers are all slightly tunable, then you can compensate. But if the sail becomes non-flat with ripples or bends in the structure that supports it, you'd have to start transmitting different wavelengths to different parts of the sail.

That might be feasible when the sail is closer to the laser and you have more spatial resolution (diffraction limit is smaller than the sail for the laser-transmitting telescopes) but the farther it gets, it may be impossible to implement transverse wavelength dispersion across the sail to compensate for non-flatness.

If there is nothing backing the dielectric stack which is itself strongly absorbing, the light would mostly just pass through back into space. If there was something back there that absorbed light, that's where the problems begins.

If the angle is substantial, then the multilayer stack will respond differently depending on if the tilt is parallel or perpendicular to the direction of polarization of the laser light.

One can try to mitigate this by opting for a coating that is optimized for a small incident angle, say 1 degree. That way 2 degrees and 0 degrees are both roughly equally suboptimal. It reduces the "number of nines" in the reflectivity but provides this over a wider range of angular deviations, making the system more robust to real-world effects.

Roughly speaking these reflectors work off of the $\Delta n$ and often $\lambda / 4$ layers, i.e. the small difference in index of refraction between the to materials that alternate in the stack, and that the accumulated phase shift along the path within one layer is frequently a usually but not always odd) integer number of quarter wavelengths. Though there can be some fiddling with with this simplification in some designs, the simplest approach is alternating quarter-wavelength layers, where it's the optical path length that's $\lambda/4$.

That's why the image at the top shows a physically thinner layer for the higher index material.

Both the index of refraction and the physical thickness of dielectrics vary with temperature. As temperature increases, they expand and become correspondingly lower in atomic density, but there are other effects as well (see below).

The minimization of thermal shifts in performance is central to the art of dielectric filter (or in this case mirror) design. In space with a hot laser that may not be so perfectly stable and absolutely uniform in intensity across the sail combined with the "cold of space" where heat can be radiated, achieving and maintaining "five nines" of reflectivity would be quite an achievement!

Any micrometeorite damaged site will now no longer be reflective, any non-transparent materials can now get hot.

Cosmic ray protons will continuously bombard the film and displace atoms and occasionally convert them to different types of atoms. Interstitials and vacancies can make color centers which can be strongly absorbing, converting light to heat, and degradation of density and therefore index of refraction can detune the stack as well.

A million years ago I used to do T-matrix calculations on dielectric stacks and in principle I should be able to resurrect those skills and show a plot of transmission vs angle. That sounds fun and I might get a round tuit.

There is also the free demo version (no affiliation) of the Macleod thin film optical modeling software from the Thin Film Center so anybody interested in looking at this quantitatively and having fun designing and optimizing dielectric reflectors (for effects like angular and thermal detuning) could probably address this faster than I can.

R.I.P. Angus Macleod somebody you meet once and never forget :-)

Not the answer you're looking for? Browse other questions tagged materials light-sail or ask your own question.

2
Small probes to Alpha Centauri powered by light sails with a journey time of 20 years
2
What are the main challenges to boosting or driving smaller solar sails with a constellation of separate reflectors?

10
Maintaining ideal curvature (flatness) of a solar sail
4
How long would it take for a light sail to make it to Proxima Centauri and what speed would it get to?
3
Solar sail and debris shielding
2
Total delta-v expected from Lightsail-2's solar sail before end of mission, and why end it so soon?
3
Specific reflected energy of current materials for light sail
4
Can or 'how long will' carbon fiber survive in space
25
How realistic is the 1 kg/km² solar sail in "Death's End"?