Where exactly are the Apollo space suit sublimators venting steam into space? is there a photo of an astronaut in space that shows the opening?

This excellent answer to How have space suits dissipated the heat removed from astronauts? shows a diagram including the sublimator unit in the red square where the phase transition of water from solid/liquid (it may be "slushy" at this point) to gas removes the heat produced inside the suit the astronaut to avoid overheating.

I've never seen an actual "sublimator opening" where this happens.

Question: Where exactly are the Apollo space suit sublimators that vent steam1 into space? is there a photo of an astronaut in space that shows the opening?

1The old documents say "steam" and of course that's what water vapor can be called. It won't look "steamy" because it's not condensing into visible droplets; molecules are flying off at 300 to 400 meters/second on ballistic trajectories. If it was in air, the molecules would be bouncing around and diffusing away and constantly colliding every dozen microns or so, so that they have plenty of opportunities to form droplets. 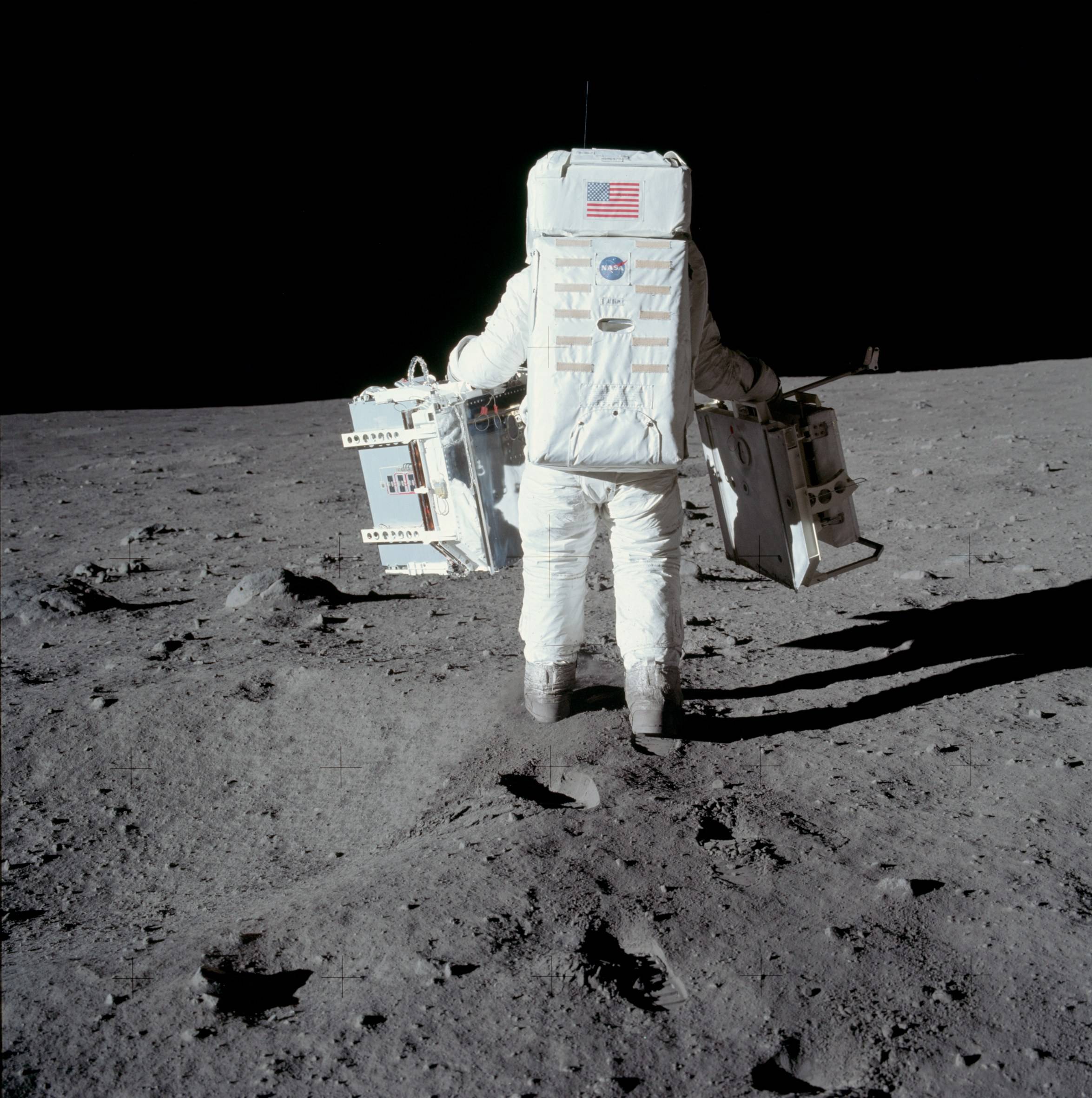 I don't see an opening in the white fabric cover of Armstrong's system in the photo above. How/where does the steam get out? 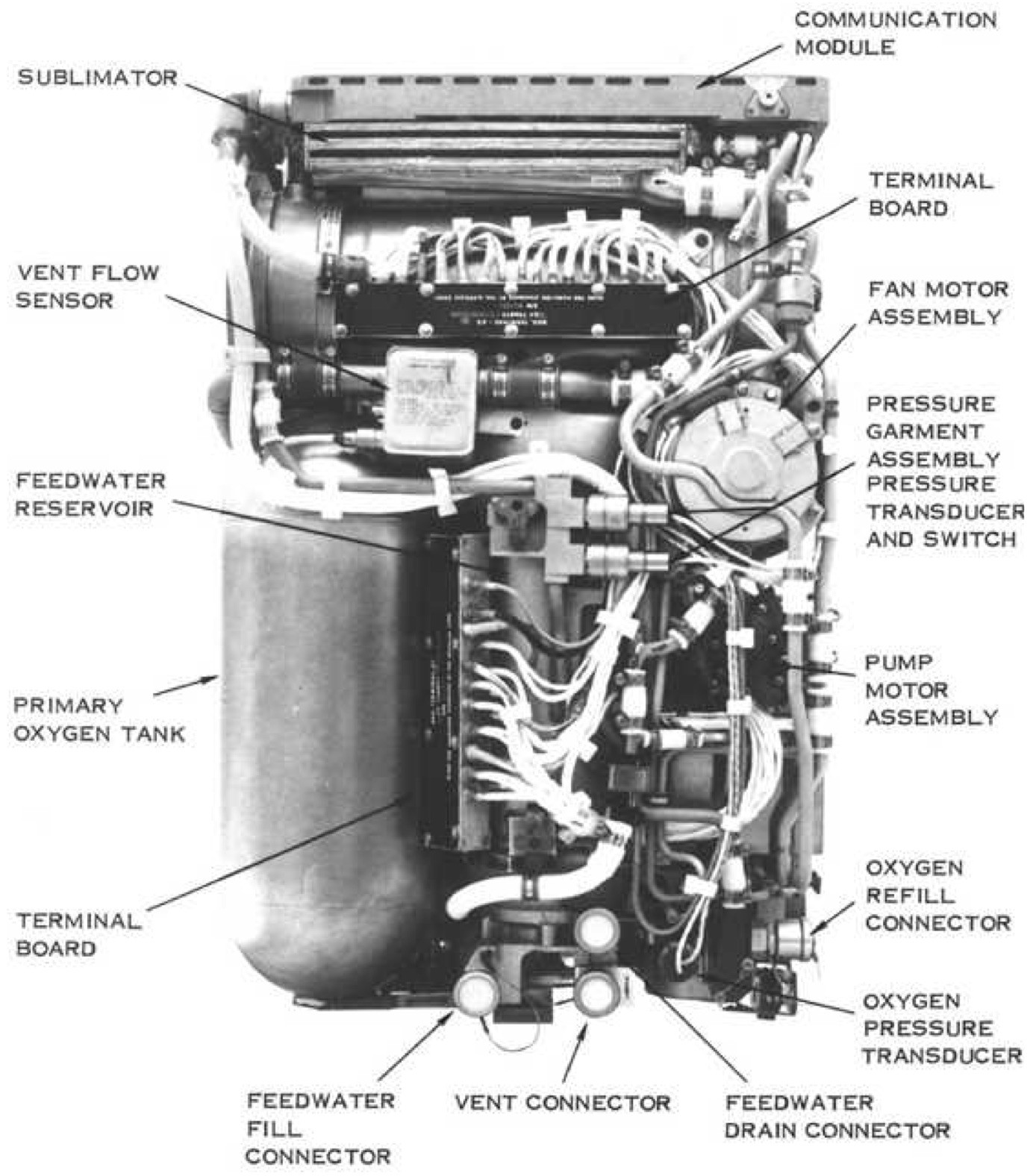 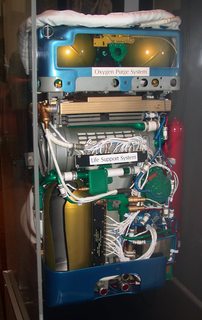 It can be hard to see because it's on the front of the PLSS behind the astronaut's helmet. 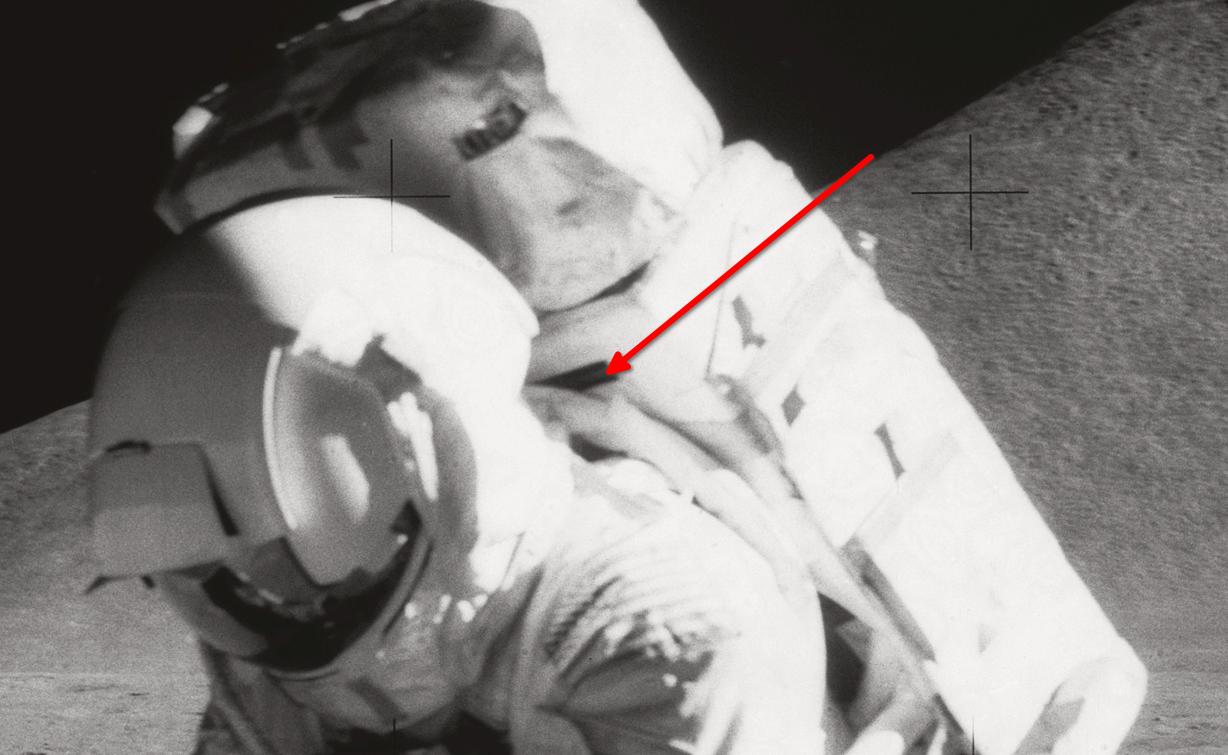 (NASA photo of Irwin on Apollo 15, I cropped it and added the arrow)

Here's an exploded view showing the vent opening; the sublimator isn't labeled, but it's clearly the same device labeled in the image in the question. 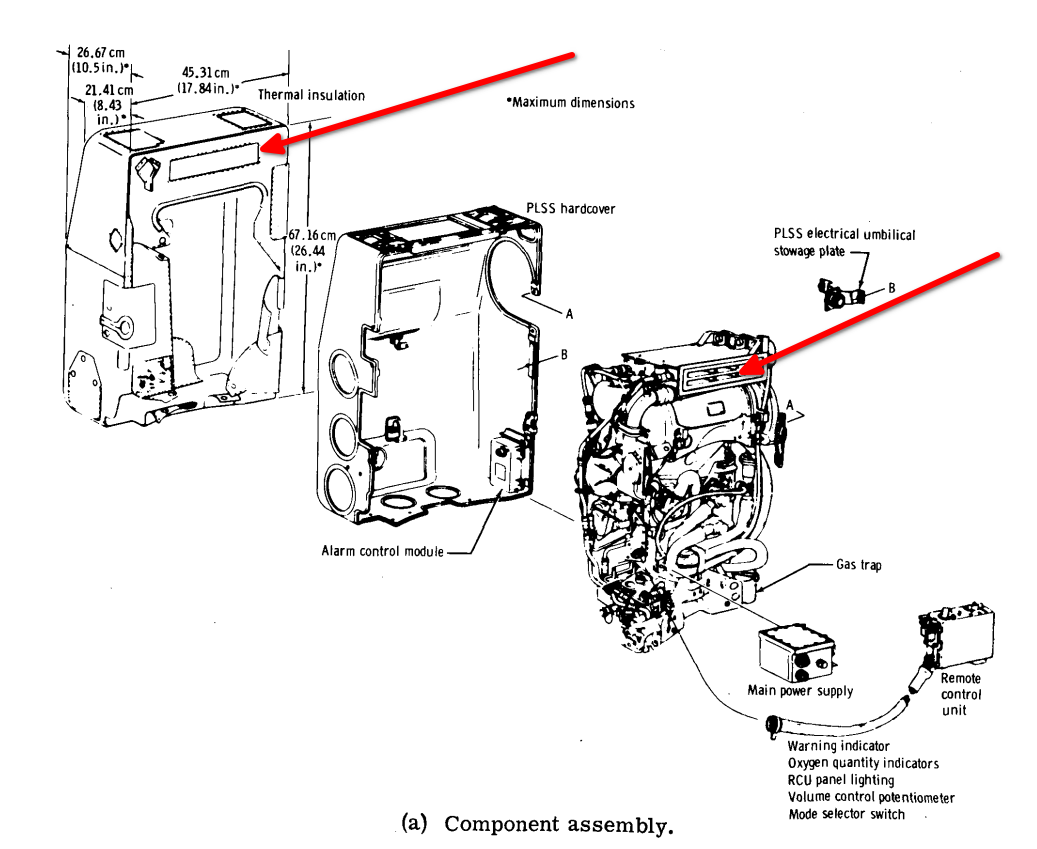 From Apollo EMU Experience Report, I added the arrows.

It appears the size and shape of the vent varied from generation to generation of the PLSS. 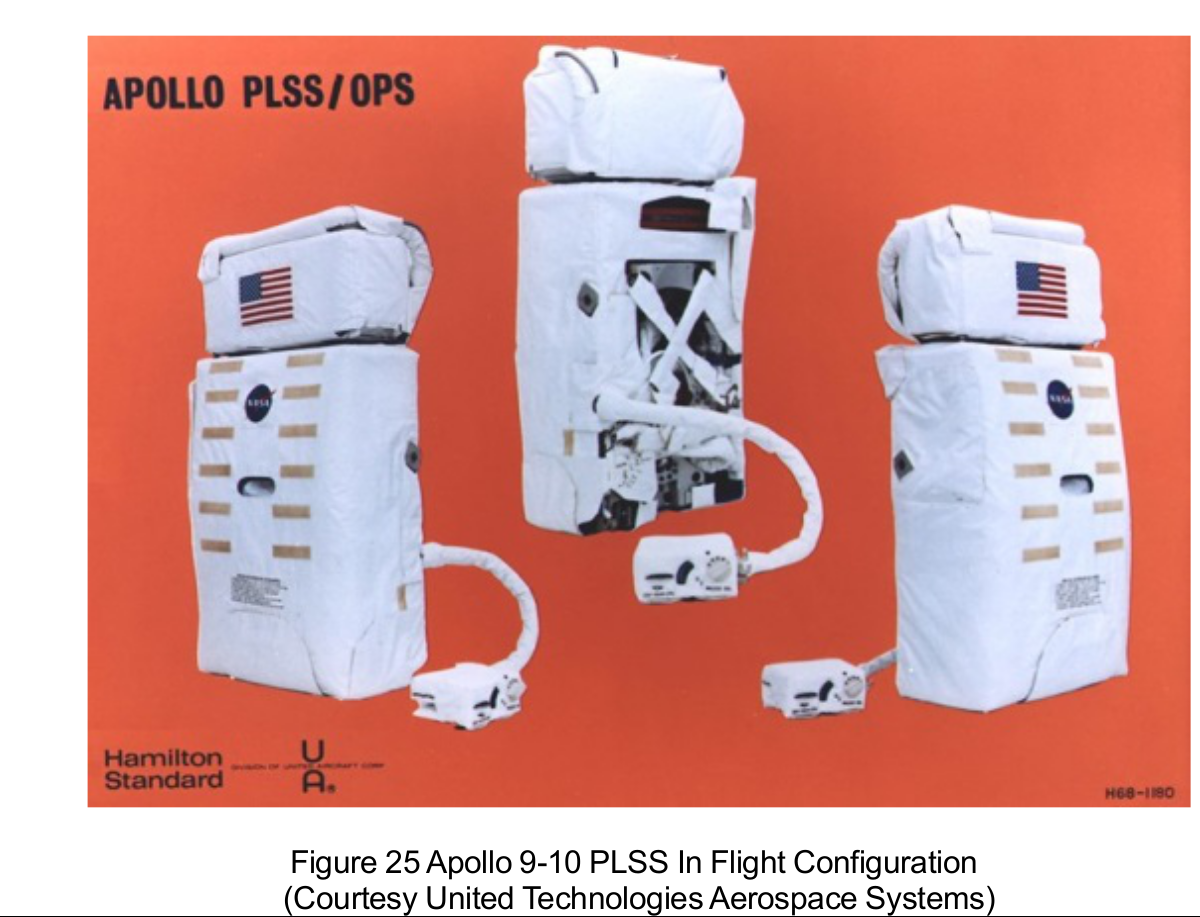 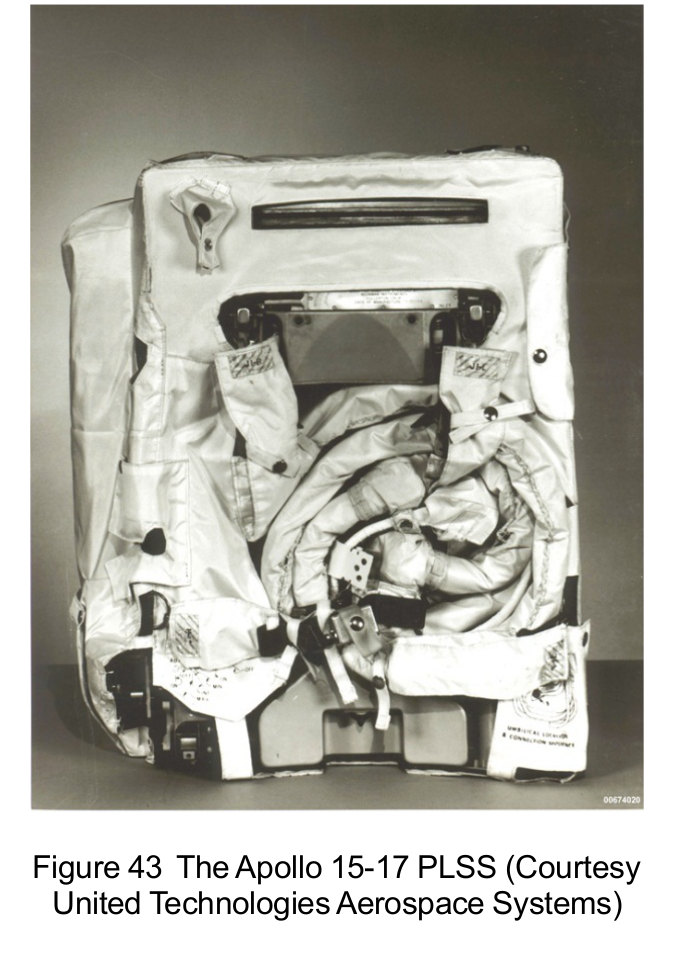 Not the answer you're looking for? Browse other questions tagged apollo-program spacesuits thermal life-support thermal-control or ask your own question.

10
How have space suits dissipated the heat removed from astronauts?

0
Where can I find a good source of information on the material properties of space suit fabrics?
24
How exactly did the floor of an Apollo LM look like after EVA(s)? Seeking photo!
0
Are the materials presently available to make the SpaceX space suit?
12
Where are the Apollo forward heat shields currently located?
7
How were Apollo spacesuits cooled during simulations/rehearsals on Earth?
26
Are there types of animals that can't make the trip to space? (physiologically)
3
Are there other "glow in the dark" Luminex wire and light-emitting patch designs for the Z-2 or any other space suit?
4
Are there fluid disconnects that sever just before the Curiosity or Perseverance rovers separate from their cruise stages or landers?
5
Are there any markings that uniquely identify each Saturn-Apollo combination?