How much meteorite material hits the moon and could it be useful?

Does the material that hits the moon all vaporize and disperse so much it doesn't lead to enriched deposit areas, or could it sometimes be useful?

I'm thinking in particular of a permanent moon base, the beginnings of a moon economy.

Dennis Wingo and I had an argument over this. Wingo argues asteroid impacts have left rich ore deposits on the moon. My response (which he did not like) was citing Barringer's disastrous effort to mine Barringer Crater in Arizona. Barringer was correct that the impactor was metallic. But the impact scattered the ore far and wide leaving it too diluted to be profitably mined.

Dennis pointed to intact metallic meteorites found on earth's surface as well as Mars surface. He argued meteorites hit the moon slower than Mars and Earth due to the moon's shallower gravity well. I replied that the planet's atmosphere slowed the impactors so they only hit at terminal velocity. Of course the moon doesn't have enough atmosphere to slow down meteorites.

I made a chart of speeds at which asteroids would strike the moon: 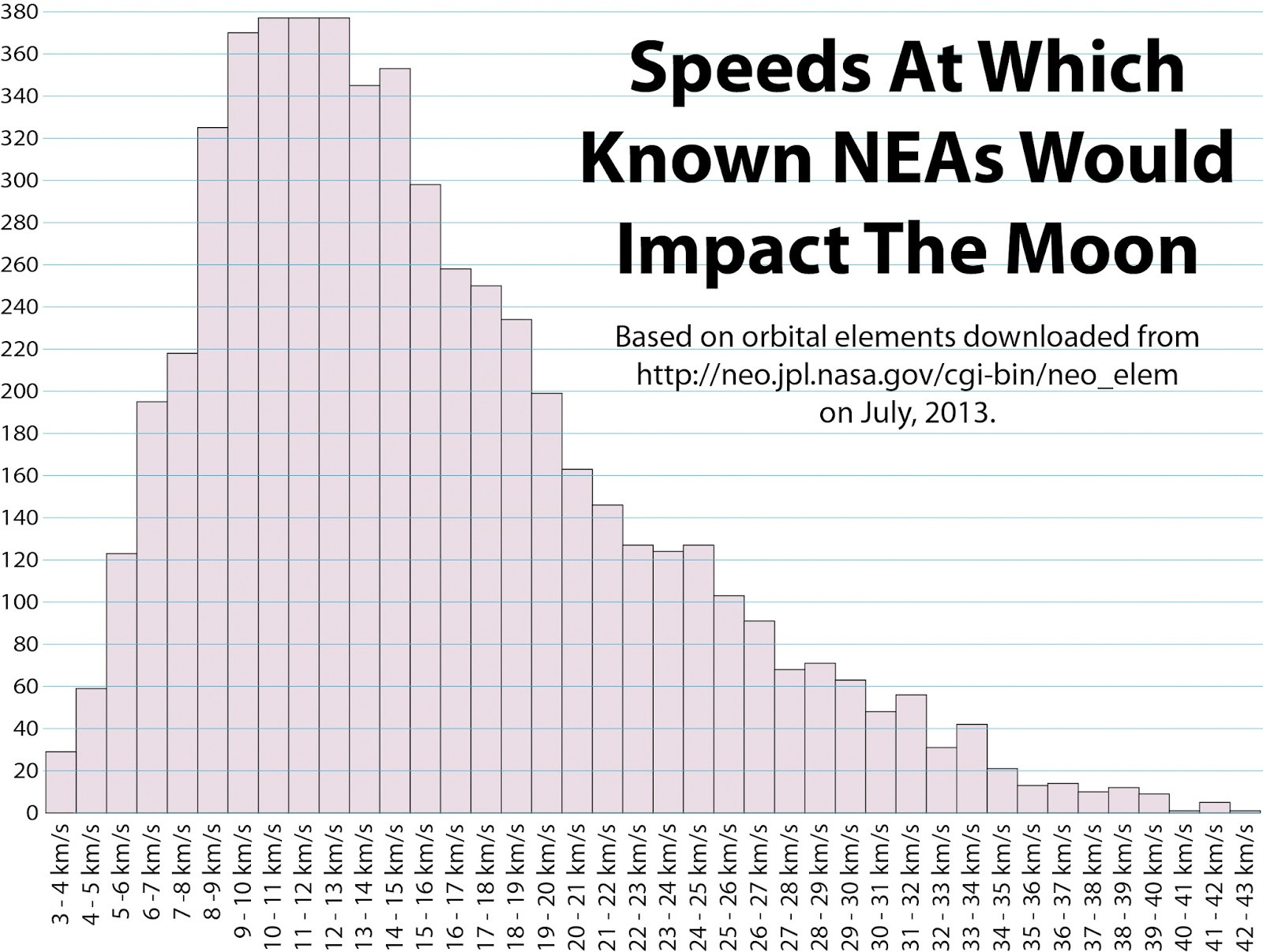 An explanation of how I built the above histogram can be found at my blog post One Legged Stools.

Very large meteorites have a higher mass/(cross section surface area ratio) and thus a faster terminal speed. So it might be possible big impactors like the Sudbury meteorite hit the earth faster than the slowest speeds in the above histogram.

Here is an article speculating the lunar magnetic anomalies are metallic deposits left by impacts. If so, we have a pretty good idea of locations of Sudbury like deposits on the moon.

So I am coming around to Wingo's opinion that there are rich lunar metal deposits left by impactors.

Does this mean they can be profitably mined? No. The delta V from earth's surface to the moon and back is around 20 km/s. Transportation expense prevents profitable platinum or gold mining. Even deposits of pure lunar crack cocaine would be a money pit.

To profitably mine extra-terrestrial metals, we need to break the tyranny of the rocket equation. Extra terrestrial propellent might do that. So I would argue the most valuable lunar commodity won't be gold or platinum. It will be water. Water might be found in the cold traps at the lunar poles. And it is thought that the lunar water at the cold traps is exogenic in origin. Some of the volatile gasses from cometary or asteroidal impacts will find their way to the 40 Kelvin lunar cold traps, freeze and stay. Thus it's possible rich water and volatile deposits have accumulated over the eons in spite of being widely dispersed.

So my answer to your question is a tentative yes. Yes, it's possible meteorites have left useful deposits on the moon's surface.

Not the answer you're looking for? Browse other questions tagged the-moon mining meteoroid or ask your own question.

17
How feasible is it to use aluminum and liquid oxygen as future propellant sourced from the moon?
6
What would be the best recipe for a breathable atmosphere in a base on the Moon?
13
How much mass could the Saturn V rockets have landed on the Moon if nothing was coming back?
4
Could "Asteroid Redirect" make the moon more dangerous for astronauts for a long time?
2
Is this an efficient way to turn bulk minerals in space into kinetic weapons?
9
Can five refillings of the BFR second stage be useful to get to the Moon? To Mars? All five in Earth orbit?
1
Would mass drivers be able to transport base material on the moon more efficiently than drones?
5
How do the Dynetics-led team's ALPACA lander's "drop tanks" rendezvous and jettison work in terms of trajectories?
5
Is lunar sample return comercially viable for a private company?