Why did the space shuttle's altitude go down after reaching 108,000m?

I recently took a look at this little data sheet by NASA: Math and Science @ Work; Space Shuttle Ascent

Note: Notice from the table that the altitude was negative at liftoff. Zero altitude can be described as a specific distance from the center of the Earth. Since the Earth is not perfectly spherical the location of the launch just happens to be below this specified point. Also, because this is a calculated number, some degree of error may be present.

As you can see, as time passes, the velocity and altitude of the rocket went up exponentially. [CORRECTION: I was mistaking this data for something else. The vel/alt does NOT go up exponentially, sorry about that!] However, why did the altitude stop increasing after reaching 108,000m, and then decrease after that?

Also, why was the acceleration rate inconsistent throughout the takeoff? Why was it the highest when the altitude was decreasing?

Thank you, I'm working on a project related to the Rocket Equation and am wondering if this is worth mentioning in said project. :)

The drop in acceleration around 40s into the flight is the shuttle throttling down to reduce the aerodynamic load on the vehicle. It then accelerates when past this point.

The drop in acceleration at 2 mins into the flight is due to the solid rocket boosters running out and being discarded.

Acceleration then continues to build, as the thrust from the engines is constant, but the vehicle mass gets less and less as the fuel is consumed. The peak acceleration is due to the low mass when the tank is almost empty, and not related to the altitude.

In fact, towards the end of the ascent the shuttle is throttling down as the mass goes down, to keep the acceleration below 30m/s/s, for structural reasons.

The change in altitude is due to the shuttle overshooting its initial altitude, so it can put all its thrust into horizontal velocity after that. So it actually falls a little as it continues to burn and accelerate horizontally, but eventually this horizontal velocity results in it not falling anymore (as the earth falls away below it at the same rate).

For what it's worth, the Saturn V did the same thing getting to parking orbit. Different vehicles with different propulsion and staging, but the outcome is essentially the same: 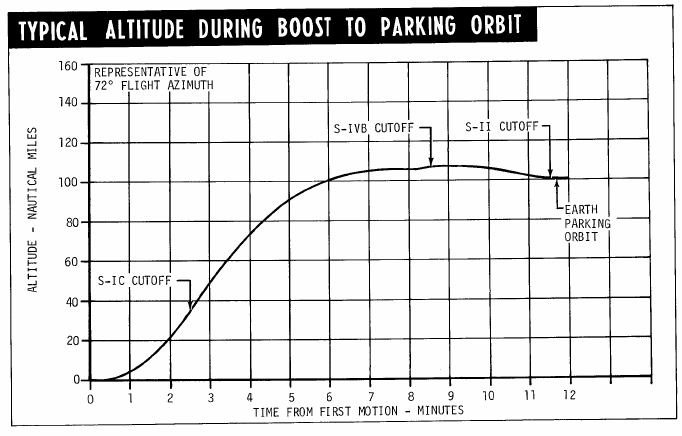 Source: Saturn V Flight Manual. Note that the graph labels for the second (S-II) and third (S-IVB) stage cutoffs are incorrectly swapped. The source explains the third stage's burn as an insertion into the Earth parking orbit:

Innovine's answer provides one explanation: the vehicle has surpassed the desired altitude, but needs to gain speed to stay in orbit. Another way to look at it is in terms of apogee and perigee. The vehicle has reached maximum altitude (apogee), but the perigee intersects the ground. Another burn is necessary to raise the perigee to orbital altitude.

Let's look at the numbers. The acceleration is high at the start (full force!). It drops a bit at 40 seconds but then increases steadily due to mass loss. Between 100 and 120 seconds, there is a sudden drop in the acceleration. The two main thrusters are thrown off. From the lower value the acceleration increase continuously. In a somewhat linear fashion. When the highest altitude is reached the shuttle moves horizontally after which it moves toward a lower orbit. The acceleration is increasing towards a max around 480 seconds. Around 500 seconds the force is turned off and the shuttle has reached a height of about 105 kilometers. This height will increase until a stable orbit is reached.

Not the answer you're looking for? Browse other questions tagged launch space-shuttle mission-design velocity acceleration or ask your own question.