How many existing satellites have a continuously varying orbit because of human design decisions?

In the space community, there is an assumption that changes to an Earth satellite's orbit are infrequent (other than those due to atmospheric drag). Are there any known satellites designed to continuously change their orbits using solar sails or another inexpensive propulsion method?

By continuous, I do not refer to "station-keeping" maneuvers which are in fact designed to maintain a specific orbit. I refer instead to satellites which purposely change their orbits continuously, by design.

EDIT: By satellite, I mean an earth-orbiting object designed to avoid atmospheric re-entry for multiple years, doing something besides just adjusting its orbit during that time (i.e., its purpose is more than just to demonstrate the feasibility of a continuously changing orbit).

EDIT: Title changed to "How many existing satellites have a continuously varying orbit because of human design decisions?"

and it seems that they do, then the answer to "How many existing satellites..." is probably zero.

GOCE continuously thrusted to maintain, not change its orbit.

and links to this answer to What is the most aerodynamic Satellite?

...there are groups of satellites that have adjusted their attitude to make their solar panels interact with weak atmospheric drag to either drift slowly forward or backward over time compared to their nominal attitude in order to spread out within their orbital plane after being launched and deployed together. I'm still looking forward to a clarification from you on exactly will or won't count as "powered".

and now remember, I was thinking of the CYGNSS constellation. From How can the CYGNSS spacecrafts (actually) measure ocean roughness?:

above: screen shots from CYGNSS_FactSheet_October2014

They did use a little electrical power to perform attitude adjustments to increase or decrease atmospheric drag mostly from the solar panels, but it was not powered flight.

From this answer to Rocket to launch 8 cubesat to LEO at an equidistant distance: 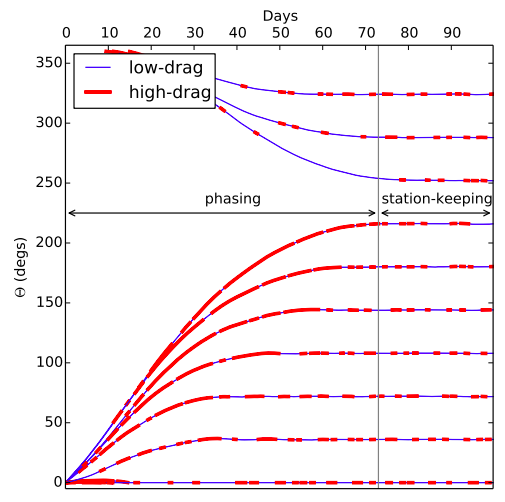 But I could be wrong!

If someone thinks of something that meets your criteria, or something new is put in space that does, then new answers can be posted.

Not a complete answer nor can it be considered "powered", but this page from The University of Twente lists about 235 satellites that are in sun-synchronous orbits.

This is useful for scientific satellites that perform long-term observations of the sun, or satellites that don't have any on-board batteries and therefore can't tolerate having Earth shadow their solar panels.

It represents a continuous change in the Keplerian orbital elements due to a non-central force (Earth's oblateness), albeit completely natural in origin.

Not the answer you're looking for? Browse other questions tagged artificial-satellite orbital-maneuver solar-sail advanced-propulsion science or ask your own question.

9
What is the most aerodynamic Satellite?
5
How can the CYGNSS spacecrafts (actually) measure ocean roughness?
4
Rocket to launch 8 cubesat to LEO at an equidistant distance
3
Will the Planetary Society's LightSail spacecraft's solar panels be articulated during each orbit?
3
What technologies enable or at least help satellite operation in Very Low Earth Orbit (VLEO)?
2
Total delta-v expected from Lightsail-2's solar sail before end of mission, and why end it so soon?
1
Does Lightsail-2 take significant advantage of the Oberth effect?