How long would it take for air to completely leak from a spacecraft?

If a spacecraft of volume V was leaking air of density rho as a mass flow rate of m-dot can you calculate the time for all the air to leak out using (rho x V)/m-dot? rho would decrease and m-dot should decrease but by what amount would the ratios change? Can you use (rho x V)/m-dot then double it? Or because it is a vacuum the air is leaking into as the density decreases the velocity of the air escaping increases so the time would not need to be doubled?

Cheers for any help but really I just want to get a big vacuum chamber and collect data on this, if anyone has one and can do the experiment please let me have the data :)

Here is a graph that showed how long it would have taken the shuttle Orbiter to leak down to 8 psi. 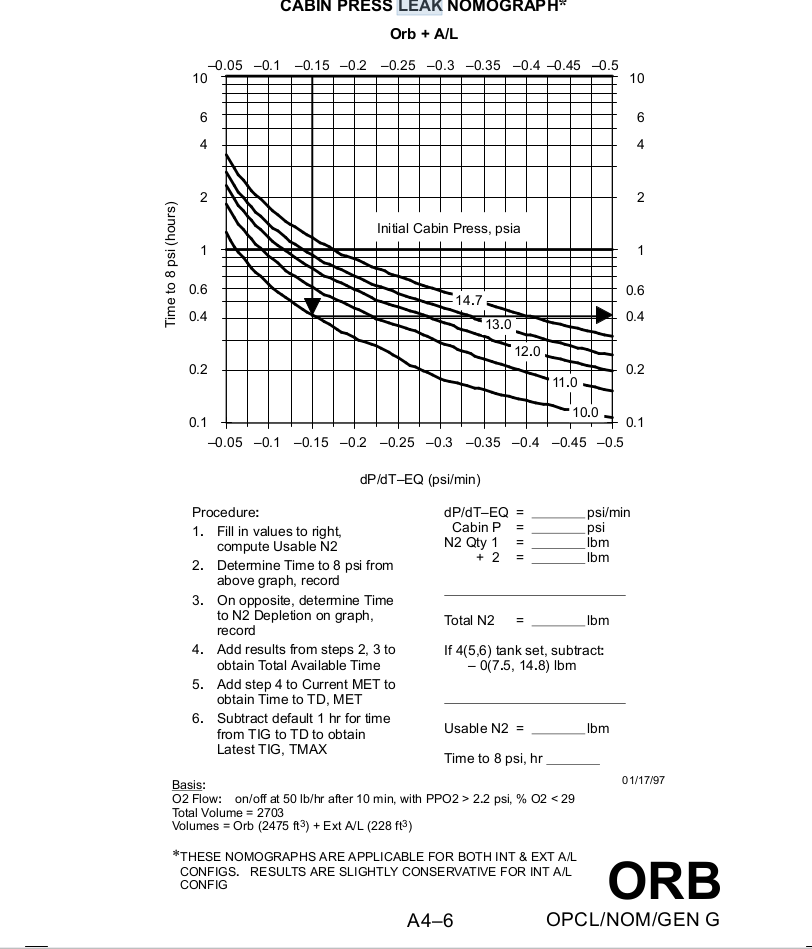 You pick a curve based on the initial cabin pressure (14.7 was nominal). The X axis is the equivalent dp/dt (rate of pressure drop corrected back to 14.7, this is a function of the hole size). Then you read the time to 8 psi off the Y axis.

For example, a 1/3 inch diameter hole was predicted to give (roughly) an equivalent dp/dt of -0.1*, which would leak down a 14.7 psi cabin to 8 psi in ~35 minutes. (*this info is from the Shuttle Systems Training Console Manual, not online)

(8 psi was important because that is the pressure at which the emergency regulators cracked and started flowing gas into the cabin. After that, there was a 2nd nomograph that showed how long it would take to expend all the stored gas onboard).

At the bottom you can see the total cabin volume was 2703 cubic feet.

This answer talks about how the graphs were used and gives the source: First actions taken after identifying a potentially catastrophic decompression?

Not the answer you're looking for? Browse other questions tagged crewed-spaceflight time mass leak or ask your own question.

30
Was the ship decompression scene in the movie Aliens realistic?
4
First actions taken after identifying a potentially catastrophic decompression?