How does the ISS crew adjust the color of the new LED cabin lighting? Is there a knob somewhere? Can it be programmed to change by itself?

@OrganicMarble's answer to What's the small white gadget with two black buttons in this video of the International Space Station? includes the On/Off switch for cabin lighting aboard the ISS. 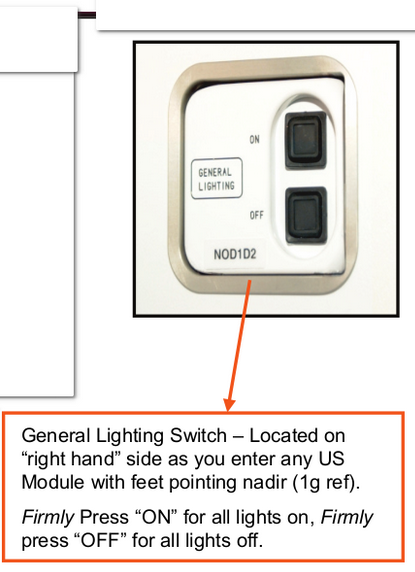 Is the new RGB solid state LED lighting on the ISS ever used to produce colors other than white? remains unanswered.From this answer: 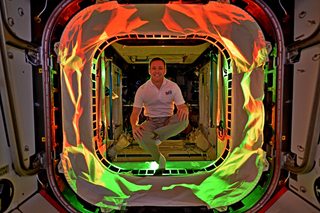 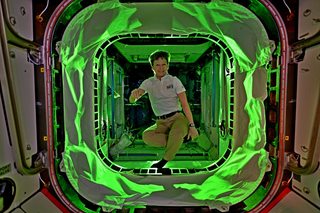 Question: How does the ISS crew adjust the color of the new LED cabin lighting? Is there a knob somewhere? Can it be programmed to change by itself?

Until someone has a better answer, I did briefly look at this some time ago when I saw that they had installed adjustable internal lighting.

It also is part of an on going experiment - Solid State Lighting Countermeasures, that started in 2016 through to at least 2019, though results are not yet available. https://lsda.jsc.nasa.gov/Experiment/exper/13815

What I have gleaned so far though is that there are complaints that even though the SSLA are an improvement over the original GLA, they still run hot and generate significant amounts of heat. What they also found is that the visible light unexpectedly changed color due to the light bounce off the internal lining in the crews quarters. Significantly, blue light was being absorbed more than the others, causing a shift in the light spectrum. Whilst not affecting the original experiment, if the lighting spectrum were to be enforced, a shift in either the programming or an alternative might be looked at. For this reason, they have been looking at alternative LED light panels as well.

A note regarding the green/red fun photos from the station:

Based on what I have read, and perhaps even based on doing photography, I think that these images are nothing to do with the LED lighting system. The images are quite badly processed and suggest a very bright single point light source behind the subjects. Given that camera/tripod/monopod mounts can and are placed all over the place, including in the middle of the module, its pretty easy to stick a remote strobe unit there, add a filter or gel, and take a photo, firing the strobe remotely behind your subjects. Given the most prevalent photographic DSLR system (I know other brands are there too, but Nikon was chosen, IIRC because of its radiation shielding specs were better than Canons at the time of selection) has an inbuilt remote commander ability, setting this up is very easy... (I can't find the link - does Jack say anything about setting up cameras or having fun taking photos?)

Several links are pretty much the same articles presented via different sources, though most material dates from around 2016 through to 2018, with the first test installation in 2008 referenced (Expedition 18). The same technology appears to have made its way to the commercial market, from the same developers. Bionetics were responsible for the assemblies from the first one in 2008 through to the ones that replaced the GLA's in the USOS from 2016 onwards. Lighting Science, with some of the developers originally from Bionetics created the commercial 'DefinityDigital' line, circa 2015. https://spinoff.nasa.gov/Spinoff2015/pdf/Spinoff2015.pdf https://core.ac.uk/download/pdf/42717293.pdf https://spinoff.nasa.gov/Spinoff2015/cg_6.html

As part of the experiment, the crew of the ISS are subjected to the Dynamic Lighting Schedule:

How does the ISS crew adjust the color of the new LED cabin lighting?

According to what I have read, it was pre-programmed and pre-planned with 3 lighting values:

But elsewhere it also says:

The LED module could be controlled from the ground and uses different colors of light in an attempt to induce focus and alertness or rest and relaxation as needed. 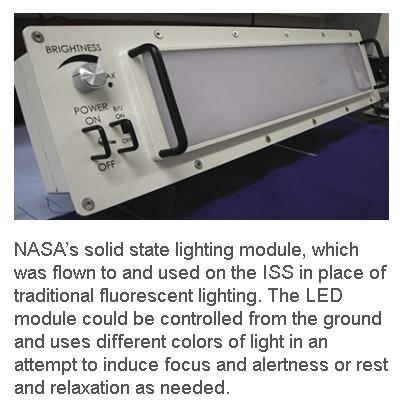 Is there a knob somewhere?

Yes, but its on the light assembly itself as seen in the photos here.

The shade system is a simple fabric cover, which was used to cover the original GLA system, can now be used for the SSLA. Not really a knob though.

Further control, based on task or crew member preference, is possible via a dimmer switch or, in Crew Quarters, a shading system. 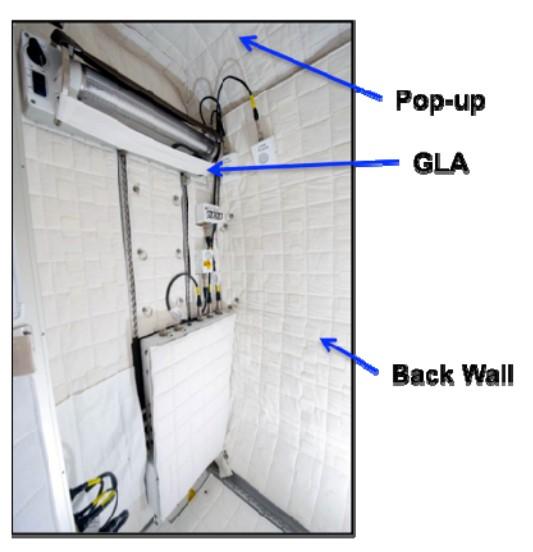 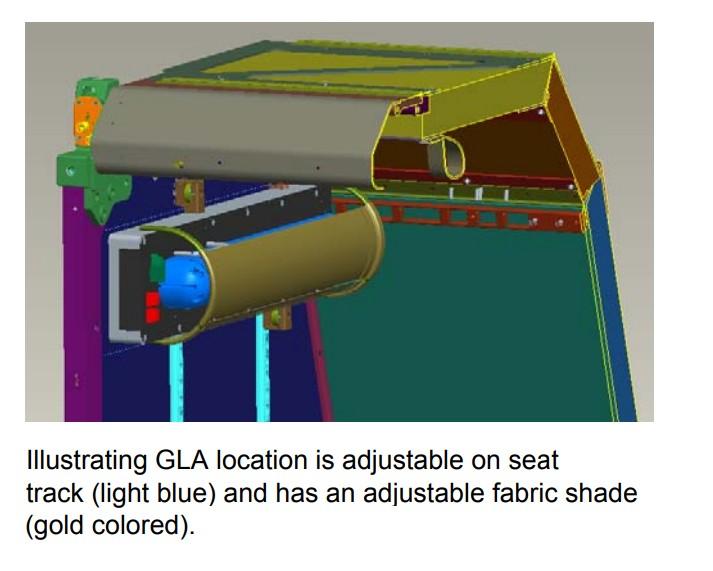 So far I have only seen this control panel localised to each of the second type of light assembly: 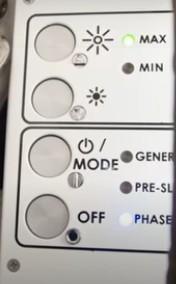 Particularly with respect to the GLA lighting replacement in the Crew Quarters, the SSLAs had an “in-place” replacement requirement - that is all of their electronics and drivers are incorporated into each unit separately.

i.e.. There is no networked link to control centrally or from elsewhere.

Can it be programmed to change by itself?

If that is a picture of the only available controller (for this type) then it seems limited.

However, aside from one mention of ground control, it appears that for now, it is fixed to only these 3 pre-programmed settings.

Night mode in Destiny (just seems they turned the lights off): 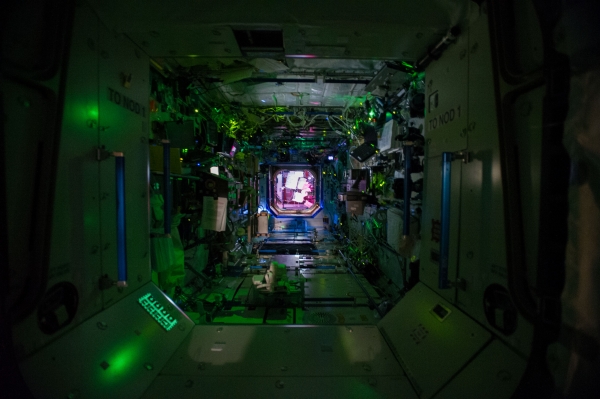 Link to the experiment page: https://www.nasa.gov/mission_pages/station/research/experiments/explorer/Investigation.html?#id=2013 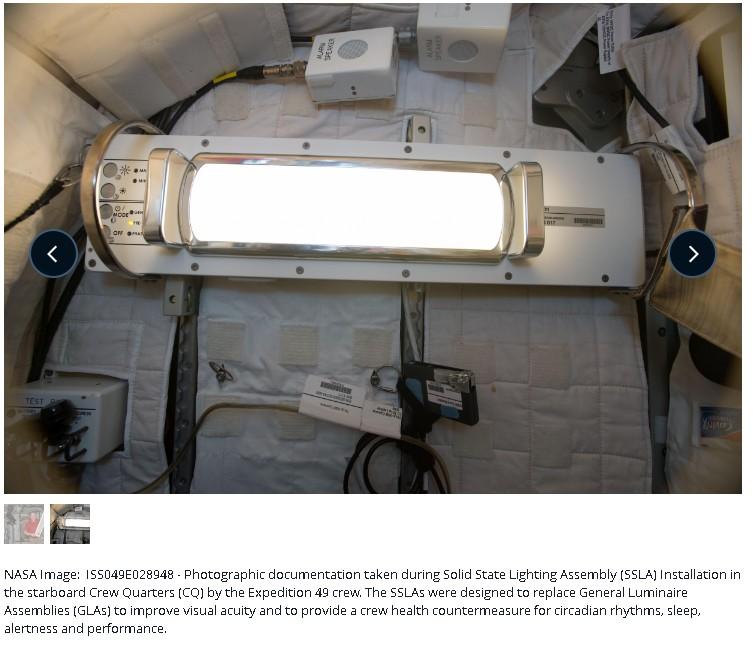 Not the answer you're looking for? Browse other questions tagged iss cabin-atmosphere or ask your own question.

15
Why are these astronauts green?
11
What's the small white gadget with two black buttons in this video of the International Space Station?
5
Is the new RGB solid state LED lighting on the ISS ever used to produce colors other than white?

9
How does the ISS adjust its solar panels?
15
How fast can the crew evacuate the ISS? (ACRV)
11
What is Astronaut Sunita Williams wearing on their wrist?