Advantages/disadvantages of wood for surface of cubesat?

Generally aluminum and kapton are the exterior surfaces of a cubesat. A Finnish/ESA cubesat, the WISA/Woodsat was launched that has plywood panels. It has protection against offgassing and very low humidity. They expect the outer surface of the wood will darken.

Given that, what else would be expected? Certainly even a thin layer of plywood would have reduced thermal conductivity, but it probably absorbs more light (heat). Is there a huge risk of overheating, or that the plywood will shatter, or what?

tl;dr: A 5 cm radius plywood surface sphere would be 178 K or -95 °C in LEO if it were in a Sun-synchronous orbit, and 16% colder on average if it had high thermal inertia and was eclipsed half the time.

Dissipate 20 W of heat internally though and the surface temperature would rise to 377 K or 104 °C and be about 25 degrees hotter inside.

During eclipse when each orbit in LEO passes in Earth's shadow, plywood will offer helpful thermal insulation against the "cold of space" that the half not facing the Earth will experience.

All of this is back of the spherical cow envelope estimation, and since a real satellite will have other non-wooden surfaces and openings, the problem is much more complicated.

I'll discuss numbers for Earth plywood with the understanding that the specially manufactured "space plywood" that will be used first for WISA/Woodsat will have been thoroughly dried and thermally processed and may differ in other ways as well.

This new answer to Puzzler - which spacecraft(s) incorporated real wood structural elements? which discusses the recent manufacturing and plans for use of "space plywood" for WISA/Woodsat links to the two videos below.

The first video explains that this is similar to normal plywood except that the glue contains phenolic resins and lignin, and the sheets are selected for highest quality.

The second video explains after about 1:19:30

...basically you can buy “normal sort-of space grade plywood from the hardware store”

Ya just plywood, there are no tricks in the actual product.

They then go on to explain that the plywood is coated with aluminum oxide (alumina) deposited using ALD.

“The base material for plywood is birch, and we’re using basically just the same as you’d find in a hardware store or to make furniture,” explains Woodsat chief engineer and Arctic Astronatics co-founder Samuli Nyman.

“The main difference is that ordinary plywood is too humid for space uses, so we place our wood in a thermal vacuum chamber to dry it out. Then we also perform atomic layer deposition, adding a very thin aluminium oxide layer – typically used to encapsulate electronics. This should minimise any unwanted vapours from the wood, known as ‘outgassing’ in the space field, while also protecting against the erosive effects of atomic oxygen. We’ll also be testing other varnishes and lacquers on some sections of the wood.”

Pre-flight testing suggests the satellite, which will orbit at around 500-600 km altitude in a roughly polar Sun-synchronous orbit, should survive its atomic oxygen exposure. But the wood is expected to be darkened by the ultraviolet radiation of unfiltered sunlight.

As well as the cameras and ESA-donated sensor suite, Woodsat will also carry an amateur radio payload allowing amateurs to relay radio signals and images around the globe. To downlink data from this ‘LoRa’ radio link involves buying a ‘ground station’ costing as little as €10.

The ALD aluminum oxide coating is meant to seal the plywood against outgassing which can recontaminate other surfaces of the satellite, including windows and lenses for the cameras.

From images below we can imagine that the plywood is 6 mm or a standard 1/4-inch thick. We can also estimate it's visible light albedo in green and red where most of the Sun's power is roughly 0.9 which puts it's visible light emissivity at about 0.1

From this answer to If used on an object on the moon, how cold would an ultrawhite painted object get?:

The equilibrium temperature of a spherical cow in space can be derived from here (found here):

Put in 0.15 and 0.9 for $\varepsilon_{vis}$ and $\varepsilon_{therm}$ respectively and we get an equilibrium temperature of 178 K or -95 °C for a uniform plywood sphere in Sunlight at 1 AU, irregardless of what's inside as long as it doesn't generate power.

Even colder if it's in a normal orbit and not sun-synchronous!

Assuming it's in a low orbit and gets eclipsed half the time, the absolute temperature would be reduced by the fourth root of 2 or 0.84, so that would be 150 K or -123 °C assuming it had high thermal inertia or was well insulated, otherwise it would get much colder during eclipse.

But in practice it won't be so cold

Of course it will be warmer because as the images show there are plenty of other surfaces and camera windows that will allow more sunlight in. Still, such a light color wooden satellite at 1 AU could potentially be too cold for its electronics to function properly unless it has some darker areas which this one does!

It's a different story if you start running the electronics!

Suppose your satellite is busy and generating 20 W of thermal power internally from the electronics and radio transmitter final stage.

In equilibrium that gives us:

and solving for T, the 20 W of internal heat generation gives us a 5 cm radius spherical plywood skin temperature of a toasty 377 K or 104 °C!

But it won't get so hot

because there are other radiating surfaces.

But that's just the skin temperature!

With a thermal conductivity $k$ of 0.15 W / (m K) and a thickness of 0.0006 meters, the temperature increase from outside to inside across the plywood would be

and that works out to be about 25 °C hotter on the inside than on the outside.

So does our wooden satellite have any advantages at all?

Yes, its insulation! Since the satellite will most likely go into eclipse every 90 minutes, it will be exposed to a much colder environment, with Earth on one side and the "cold of space" on the other.

A back of the envelope calculation will show that the 6 mm plywood will help to keep it from cooling off too fast during eclipse. It depends on the mass and specific heat of the satellite's innards and of course the other exposed surfaces, so it's a complicated thing to calculate, but if the plywood as a 100 K temperature drop across the half of the skin facing space and not Earth, it will leak about 40 watts. For 2400 seconds and 2 kg of aluminum that's "only" a 50 °C loss of internal temperature.

It's not excellent, and this is just an envelope-back spherical cow estimate, but to quote one of the planeteers in the following video: The wood is good! 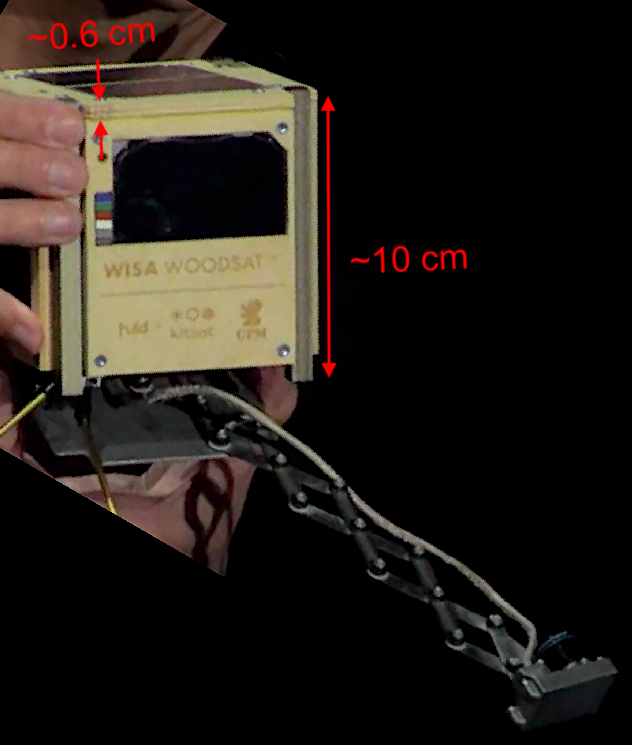 From this press release

Not the answer you're looking for? Browse other questions tagged cubesat materials or ask your own question.

26
Puzzler - which spacecraft(s) incorporated real wood structural elements?
31
Do things get dirty in space?
11
How much is known about those liquid metal droplets orbiting the Earth? (e.g. sizes, composition, orbits...) Are any actually tracked?
3
If used on an object on the moon, how cold would an ultrawhite painted object get?
2
Cubesat surface material
6
Why is the Aeolus space laser losing power so quickly?