Will there be a command moratorium for Mars spacecraft again in 2021?

About every two years, Earth and Mars are on opposite sides of the Sun (a Mars-solar conjunction). Plasma expelled from the Sun can interfere with radio transmissions between Mars spacecraft and the Earth1.

The last time this happened (2019), NASA issued a "command moratorium". Commands are no longer sent from Earth, as they may be corrupted and thus misinterpreted. Vehicles are put to rest. Data collection is reduced to low-bandwidth measurements, and transmissions to Earth are reduced:

Solar conjunction occurs every two years. This time, the hold on issuing commands — called a "command moratorium" — will run from Aug. 28 to Sept. 7, 2019.

On the surface of Mars, the Curiosity rover will stop driving, while the InSight lander won't move its robotic arm. Above Mars, both the Odyssey orbiter and the Mars Reconnaissance Orbiter will continue collecting data from Curiosity and InSight for return to Earth. However, only Odyssey will attempt to relay that data to Earth before conjunction ends. Meantime, another orbiter, MAVEN, will continue to collect its own science data but won't support any relay operations during this time.

Will there be another command moratorium in 2021? If so, when?

(This time, there are more spacecraft, including those from other nations besides the U.S. China will make their own decision, but the others rely on NASA's Deep Space Network. On the other hand, the various solar probes will have plenty of radio time available!) 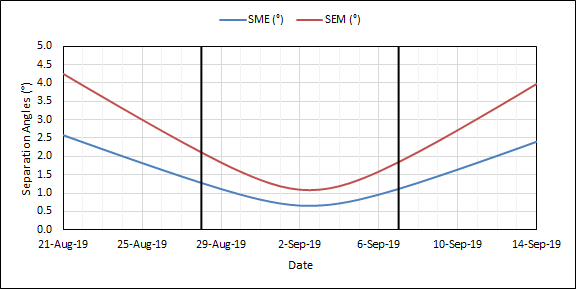 This seems to suggest the cutoff limit is ~1.3° of Sun-Mars-Earth angle (the angular separation of Earth and the Sun in Mars' sky). 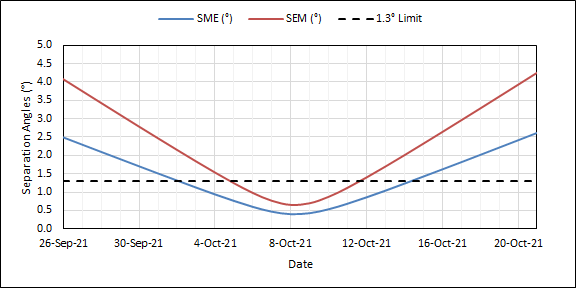 25
How well can Voyager 1 separate Earth signals from Solar noise these days?
10
What exactly is the interaction that blocked Juno's data downlink near solar conjunction?
4
Quantitatively, why will optical communication be better than X-band for deep-space communications?
0
How can the data rate be increased in noisy outer space?
2
What would be the most viable way to have constant communication with a Mars base?
0
What are the main sources of radio noise & interference limiting deep space data rates and availability?

3
How have/how will Indian ground stations be used for comms or tracking of deep space spacecraft?
6
Is it possible for Curiosity to broadcast live HD television from Mars to Earth?
1
How will "InSight's onboard communications gear perform a radio-science experiment to shed further light on Mars' innards?" (Space.com)
4
How many solar system bodies have had coherent radio transponders?
2
Why will radioastronomy telescopes be used to listen to InSight's entry into Mars' atmosphere instead of DSN?
9
How do the Mars rovers sleep through the night on Mars?
2
How many hours each day is Mars reachable by 2 of the 3 DSN complexes?
3
Effective bandwidth for Mars rovers to Earth
3
What type of battery technology does Mars Odyssey use?