What are the chances that a spacecraft is hit by space junk?

If a rocket flies into space there is a possibility that it will encounter a piece of space garbage; even a small screw can be fatal.

What are the chances that such a collision really takes place? What about such an encounter with the ISS?

Heh. So it turns out, figuring out the answer to this is precisely what I do for a living.

The glib answer: it depends.

On ISS, we typically write requirements along these lines:

The [piece of hardware] will not sustain damage from orbital debris that could create a [catastrophic hazard | subcomponent failure | other defined failure] with a probability of 0.xyz over XY years.

What exactly we write depends specifically on the hardware involved, how much we care about it, how much could station suffer if we lost it, etc.

New piece of critical structure? We'd specify a pretty stringent requirement, say, something more than 99% over a decade.

Wire harness for a Wi-Fi antenna for payloads? Maybe not so much, say, 95-98% per year.

The way that we would conventionally test for and mathematically define the risks involved in space flight, including from debris, would be through SIL levels that describe the number of dangerous events that could acceptably occur in a single hour of space flight. This is very similar to avionics, railroad systems, and autonomous driving.

The number of events per hour is very small, on the order of micro or nano events / hr for the lowest SIL levels, and decreases as the SIL level becomes more hazardous. In other words, MTBF should be very high for failures that are catastrophic and result in loss of life or destruction of expensive property like a shuttle, satellite, probe, or station.

Note that these are the ideal statistics and aren't reflective of real-world practice. Also, the number represent the aggregate time of space flight across all relevant spacecraft. Imagine testing an entire fleet of 5000 self-driving vehicles, each driving on highways and city streets for 1000 hrs for a total of 5,000,000 hrs, and you measure how many times that one of the cars was placed into a "catastrophic" situation that led to fatality or "hazardous" situation that could've led to fatality. Say the numbers are 1 and 4 for a full 5 incidents. Then the average failure rate would be 5 events/5,000,000 hrs of drive time, or 10-5 events/hr. This would probably not be considered successful based on aviation standards, but automotive manufacturers and regulators might interpret these figures acceptable. In space flight, designers and the aeronautic institutions that employ them are pretty conservative, so these wouldn't be "good enough" – the technical term is an "intolerable risk" as opposed to an "acceptable risk".

Obviously, some objects that are unmanned are treated differently from manned spacecraft, and probes, satellites, space stations, etc. will have different risk metrics. The above is a general outline.

So if these SIL metrics need to be met for a mission to be satisfactorily safe, what can be done, when random debris is floating around in near-Earth orbit? The key is to:

The US DoD has catalogued 27,000 pieces of debris in near-Earth orbit hurtling at speeds of about 17,500 mph around the planet; NASA's statistical analysis of sensor readings approximate that 23,000 of these are the size of a softball (d = 9.7 cm) or larger, and thus definitely large enough to cause a catastrophic event. In addition there are an estimated:

The marble sized ones and anything smaller can't be reliably tracked. 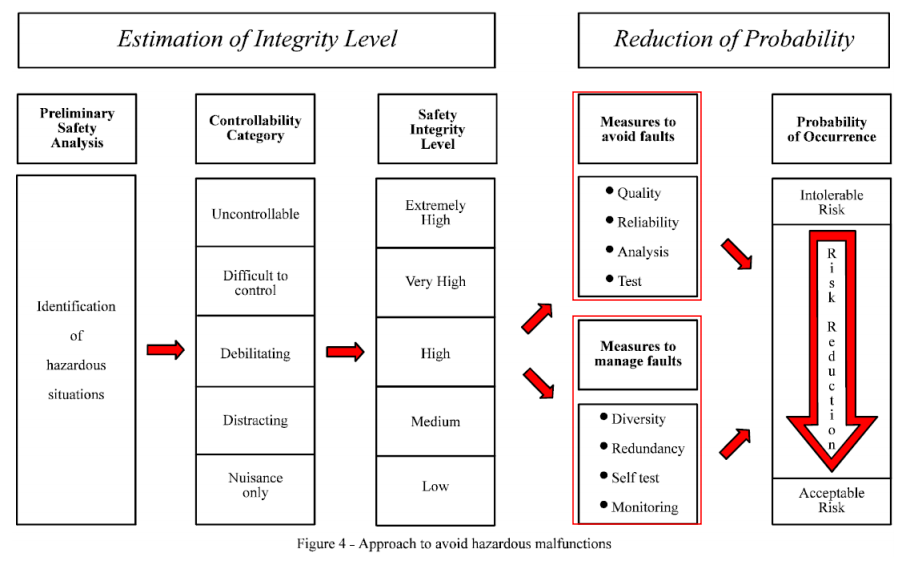 The paths of these more massive debris are analyzed (diagram above), and given a conservatively large margin of error to make the likelihood of a collision decrease to 10-9 events/hr or thereabouts. This is probably based on statistical tests (diagram above), such as Monte Carlo simulations (or something comparable but computationally faster). In the unlikely event that one of the 23,000-27,000 large tracked objects strays too far from its predicted trajectory while monitoring it (diagram above) and comes possibly dangerously close to the spacecraft, NASA initiates a Debris Avoidance Procedure, possibly involving both automated and manual roles of maneuvering the spacecraft to safety, which is part of long-standing guidelines at NASA as a means to limit SIL 4 events from occurring to an acceptable failure rate / probability.

As for the smaller debris, contemporary ships are equipped with shielding and ideally redundant protection (diagram) and redundant critical systems and hardware in case small debris damages the principal shields or mission-critical components or subsystems. Redundancy greatly reduces the probability of failure and greatly increases the MTBF. These shields work for debris smaller than 1 cm.

That leaves the 1 cm – 10 cm debris, the most deadly debris. These are large enough to breach shielding and yet are small enough to be untraceable.

In order to find the probability of a collision with these, we'd need to use historical data of how many hours all of spacecraft has flown versus how many collisions with these kinds of debris have happened. Unfortunately, the number of collisions is statistically insignificant. The other problem is that the number of pieces of debris has not remained static. For instance, in 2009, a commercial spacecraft carrying Iridium crashed into a latent Russian satellite, resulting in thousands of new pieces of debris. So the number of debris has not stayed static, making the probability calculations dependent on chronological time humanity's explored or used near-Earth space. This renders computations challenging:

Compare this to our example of testing a fleet of self-driving cars. We can easily (theoretically) scale this to tens of millions of hours testing and dozens of accidents. The probability of crashing is more or less static or at least mean-reverting across all of the cars because hazards of crashing are not continuously increasing or decreasing unless some variable – like snowfall – perverts the data, with disproportionate amounts of accidents occurring during snowy conditions and sensors failing to detect snow-covered signs.

There may be no satisfactory range of numbers to quantify the probability without substantial historical data of collisions, near collisions, number of hours of space flight time conducted since the beginning of space exploration, and approximate number of 1 cm – 10 cm debris across the entire timeline of space flight, use, and exploration. NASA might know all of this data. Even then, our detection of 10+ cm objects has improved, our spacecraft is (probably) more reliable now, so any (hypothetical) past collisions were more likely than they would be today, introducing yet another set of variables to make things even more unfeasible to compute, since these probabilities would rely on historic data that's skewed toward obsolete technology of the past.

Not the answer you're looking for? Browse other questions tagged rockets iss spacecraft collision-avoidance or ask your own question.

11
Why are we not seeing probability curves for space junk collision prediction?

45
What would happen if a mutiny occurred on the International Space Station?
8
Why is space junk so persistent in LEO?
16
How does a spacecraft such as Soyuz detect when it's on collision course with an object?
21
Are there free insects in the ISS?
5
Any official size for the ISS pizza box?
11
Why are we not seeing probability curves for space junk collision prediction?
4
Are there chances to get a Hubble + ISS Moon transit picture?