Why doesn't the ISS orient itself to the Earth's magnetic field like a compass needle?

I was watching this video of a magnet aboard the ISS floating freely. When the person lets go of the magnet, it behaves like a compass needle and immediately orients itself to the magnetic field of the earth.

Is there some care given to ensure that the station does not have a net magnetic field or to actively neutralize it? Or is the station constantly fighting this magnetic force with its control moment gyroscopes? And if so, how significant is the effect (seems significant, judging by the magnet in the aforementioned video), and furthermore does that mean that all spacecraft or satellites would need the same feature, to be able to combat the tendency to align its orientation with the Earth's magnetic field?

Because the people that run it don't want that:

The magnetic field of the ISS is quite weak. This would be a combination of deliberate and inadvertent , as it is built out of mostly nonmagnetic aluminum, plus any really significant magnetic field would be a bother to the many instruments, science packages and electronic equipment on board.

The ISS has a much stronger force acting upon it than the Earth's magnetic field. The gravity gradient would really like to orient the ISS so that its mass axis is pointing through the Earth's gravity vector. (see "tides")

But the ISS has yet another force acting upon it, that is overwhelmingly larger than either of these. It is called "Stationkeeping". The rules dictate that the ISS shall maintain a certain orientation relative to the surface of the earth, and the solar angle, and no mere tiny physical forces will overwhelm the rules as stated by the Administrators!

The actual implementation of this attitude control is via a number (4?) of Control Moment Gyroscopes, occasionally supplemented by attitude thrusters if they need desaturation. 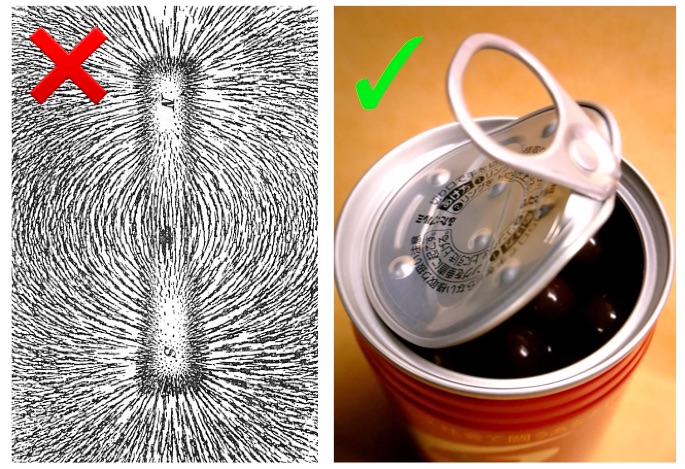 Beautiful video and demonstration, thank you!

That magnet in microgravity doesn't actually orient itself at all

I watched the video carefully and at 00:44 the first time the magnet is released it is pretty far away from the aligned direction and it does not "immediately orients itself to the magnetic field of the earth." Instead it oscillates dramatically about that point as energy is exchanged between kinetic and potential.

Eventually eddy current losses and viscous drag losses in the air would damp it down (loosing it's energy by heating the magnet and the air) and it would then look like a 3D magnetic compass.

Only two seconds later at 00:46 game developer and private astronaut Richard Garriott(?) recognizes the oscillations are to large, grabs it, and tries twice more until at 00:54 when they re-release it close to the median point, where it still oscillates at the same frequency but at a lower amplitude.

The ISS is not a bar magnet, it's an aluminum can!

The actual bar magnet that wealthy game developer and amateur science video maker Garriott uses is no model for a mostly-aluminum structure in space.

While as @OrganicMarble points out the station's structure is primarily aluminum, there will be enough ferromagnetic material with some residual magnetization (unless everything sent up is methodically degaussed, which is always a possibility) some permanent magnets inside motors with imperfect return yokes, and of course some loops of current that all together are likely to result in at least a tiny residual magnetic moment for the ISS.

Even a good captain of a wooden ship will (presumably) do both "soft iron" and "hard iron" corrections for the compass every time a substantial change has been made to the metal content of the ship.

But mostly you should think of the ISS as more of a non-magnetic aluminum can than a bar magnet.

The ISS is already spinning quite nicely

It orbits the Earth every 90+ minutes and in order to keep its down-side-down it also rotates about one of its own axes every 90 minutes as well. There's a lot of angular momentum stored there and that probably dominates any interaction between any residual magnetic moment and Earth's field.

It also works very hard to maintain that state.

And if it lost that ability to control its attitude and rotation, atmospheric drag (a very lossy and damping influence) would either forcefully align the ISS to a new equilibrium rotation state with a minimum drag orientation, or cause it to spin and tumble wildly.

This isn't an answer, just a minor addition to the previous answers. There have actually been cases where satellites have accidentally become magnetized and caused an undesirable magnetotorque; it is a legitimate consideration!

An unanticipated roll torque was imparted to a commercial communications satellite launched in 1989. This torque mandated excessive thruster corrections by the attitude control system until the propellant was prematurely exhausted, resulting in mission failure.

Subsequent magnetic characterization tests performed on an engineering model of the large stainless steel propellant tanks revealed that the tanks could be easily magnetized during or after fabrication. The dipole moment of a magnetized tank would interact with the earth's magnetic field. This force would attempt to align the spacecraft with magnetic north, like a compass needle, producing the observed roll torque and requiring excessive attitude corrections by the thrusters. Testing showed that once magnetized, the tank would be capable of retaining a residual field that produces a dipole moment much greater than the 580 A-m2 required to produce the observed torque.

The satellite's two stainless steel propellant tanks had been substituted for titanium tanks due to schedule deadlines. Since stainless steel material is generally assumed to be non-magnetic, no magnetic testing was performed. However, it is possible for the stainless steel sheet metal to become residually magnetized, with an associated moment, either by working it into the tanks' hemispheric shape or by exposure to an external magnetic field.

The AMS-2 uses a large solenoid magnet. The paper

There are two key issue with magnetic attitude control. The torque is small, which is why magnetic torquers are only used for smaller satellites. Another issue they do not and cannot provide control over all the three degrees of rotational freedom. There is always at least one degree of freedom that is not controllable via magnetic control, which means that spacecraft that do use magnetic torquers need to have some other attitude control mechanism.

Not the answer you're looking for? Browse other questions tagged iss magnetic-field or ask your own question.

35
Why does the ISS rotate exactly once per orbit?
10
Could the ISS stop rotating wrt the stars for a few days, then start again?
9
Could Magnetorquers be used on the ISS?
13
Does the "Tennis Racket Theorem" apply to the ISS? Does it rotate around its intermediate (unstable) axis?
7
Could an articulated permanent magnet work as a low-power cubesat magnetotorquer? Problems?
5
Is the ejection of matter one way to get pushed the other way the only propulsion method we have?
5
Does the ISS yaw in orbit? And if so, why?
4
Rotating in orbit?
9
Has the ISS ever "flown upside down"? Has the cupola ever "looked up"?
6
How well could the ISS attitude control system detect periods of astronaut activity?
See more linked questions