From what altitude will they cut Dragonfly helicopter loose on Titan and make it land itself, and what are the main factors determining this altitude?

Titan's surface pressure is about 1.5 bar and because the surface gravity is low pressure falls off much more slowly with altitude than it does on Earth. From Wikipedia's Atmosphere of Titan; vertical structure:

Titan's vertical atmospheric structure is similar to Earth. They both have a troposphere, stratosphere, mesosphere, and thermosphere. However, Titan's lower surface gravity creates a more extended atmosphere, with scale heights of 15–50 km (9–31 mi) in comparison to 5–8 km (3.1-5 mi) on Earth. Voyager data, combined with data from Huygens and radiative-convective models provide increased understanding of Titan's atmospheric structure.

The plot below suggests a scale height near the surface of about 15 km and the pressure of 1 bar (Earth's surface pressure) at about 6 km, though I don't know about the density which what matters more to its propellors. 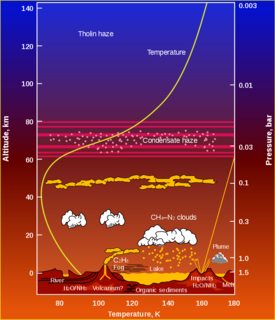 Question: As I understand it, since the atmosphere is dense and tall and dragonfly comes with all these low-light cameras, navigation hardware and four pairs of propellors, there'll be no sky crane. At some point they'll just cut it loose and let it manage it's own descent. 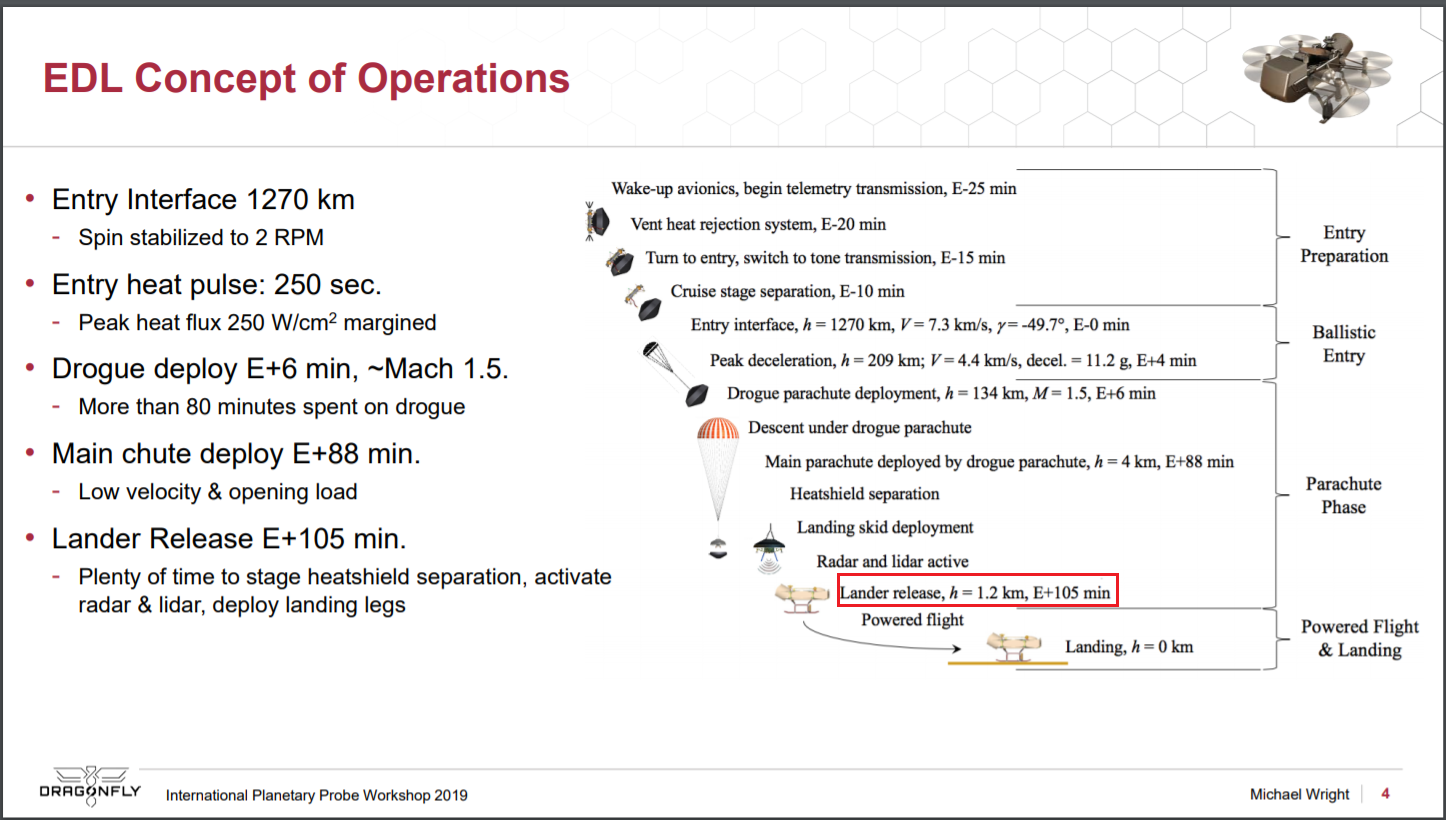 The ConOps indicates that the lander is released at 105 minutes, at a height of 1.2 kilometres. A later slide states that the delivery accuracy is an ~149 x 72 km ellipse at release.

Question 2 is a very good question that I have not found any information on (outside of what is presented here). I suspect that vigorous engineering work on this phase of the mission has not occurred yet. This paper (Selection and Characteristics of the Dragonfly Landing Site near Selk Crater, Titan, Lorenz et al. 2021) provides some insight in the form of topographic profiles near the proposed landing site that have variations of a few hundred metres:

9
How do they know that the Dragonfly helicopter won't get quickly coated in tholin muck? Any desliming technology for camera lenses or propellors?

5
How do we measure the atmospheres of Solar system planets?
9
Titan - Is the source of so much Methane being overlooked?
8
Archimedean braking for low density Venus lander + subsidiary question
26
When did planetary scientists realize Venus' surface pressure was almost 100x that on Earth? How did they find out?
1
Does the Dragonfly project (quadcopters on Titan) envision attached RTG's or would they be static and revisited for charging?
4
What is the atmospheric composition of Venus at the 34 mile (50 km) altitude of the proposed HAVOC program?
9
What is the pop-up circular disk with spiral pattern in this NASA animation of the Dragonfly helicopter for Titan? Antenna? Kind, band, target?
9
How do they know that the Dragonfly helicopter won't get quickly coated in tholin muck? Any desliming technology for camera lenses or propellors?