What asteroids have the least delta-v to reach?

I think the question needs very little clarification - specific asteroids and/or their asteroid orbit type would answer it. My own interest is in what would best suit targeting for asteroid mining on the basis of delta-v requirements to reach known objects with known orbits.

Near Earth Objects and Earth orbit crossing ones would seem to be easier to reach - less delta-v - but I don't know it is actually the case: Atiras asteroids are inside Earth's orbit around the sun without crossing it, Atens are inside but do cross it, Apollos are outside and cross it and Amors are outside and don't.

note: This is a historical answer, and explains how to find tiny asteroids close by. The OP has clarified they want a profitably mineable-sized asteroid so there is room for more answers.

As discussed in Have there been any documented mini-moons since 2006 RH120?, "mini-moons" are predicted to regularly enter temporary chaotic orbits within the Earth-Moon system for months to years, and for meter sizes and below there should usually be one available, if you can find it! (see below). From the last half of the abstract of the 2012 preprint The population of natural Earth satellites:

At any given time there should be at least one NES of 1-meter diameter orbiting the Earth. The average temporarily-captured orbiter (TCO; an object that makes at least one revolution around the Earth in a co-rotating coordinate system) completes (2.88 ± 0.82) rev around the Earth during a capture event that lasts (286± 18) d. We find a small preference for capture events starting in either January or July. Our results are consistent with the single known natural TCO, 2006 RH120, a few meter diameter object that was captured for about a year starting in June 2006. We estimate that about 0.1% of all meteors impacting the Earth were TCOs.

For planning and launching such a mission you do not even need a significantly positive geocentric $C_3$; your mission takes place in high Earth orbit though you will need some more delta-v for maneuvering into the asteroid's chaotic orbit, coming along side it, and station-keeping against differential solar pressure and tidal forces from Earth and Moon.

Note: you will need very tiny, precision thrusters for these maneuvers as your velocity adjustments may be measured in microns per second rather than millimeters per second!

You may also want to scrap those large, flat solar panels which in this case will feel like solar sails, and either just cover your surface with them (allow for ways to radiate heat as well!) or use an RTG.

It is worth noting that in chaotic three-body motion (Earth + Moon + negligible/essentially massless object) you can't really say for sure if the energy is positive or negative; if the orbit is bound or unbound. If you know state vectors exactly you and predict if it has a chance of escape or not and roughly when. For more on that see @MarkAdler's answer to Was the Apollo spacecraft always gravitationally bound to the Earth-Moon system? which begins:

Hmm. This question is trickier than it sounds. To know whether a body in a three-body system is always gravitationally "bound", you have to look into the future.

For a model of what the mission might be like, look at missions that insert into 3-body halo or Lissajous orbits, like SOHO, DSCOVR, JWST... "and the rest."

You will likely need a little more delta-v reserve to catch up to and match the particular mini-moon's trajectory exactly since with a mass of only a few ton's entering orbit about it will not be practical; solar pressure is probably the main problem here.

You will also need a lot of fancy thermal infrared imaging and radar work from Earth, from other spacecraft and from your spacecraft to nail down the asteroid's exact position and velocity because:

Happy hunting, there's probably one out there right now! 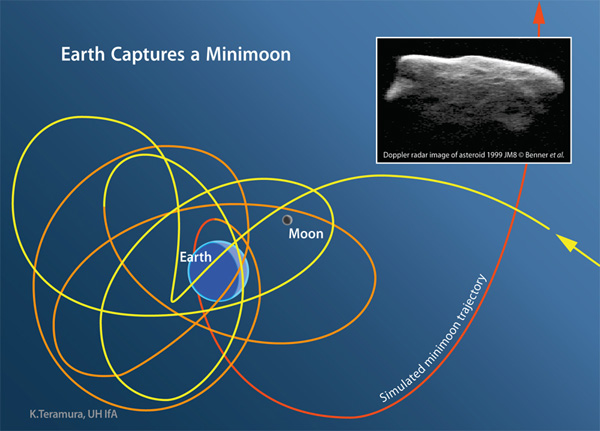 I don't have the time right now to post a comprehensive answer, so I'll do a provisional one with some resources that might help you out. At some point I will might edit this into a full answer.

Here's a couple of papers that you'll be interested to read:

So that this is not a link-only answer, here are some takeaways from skimming through the texts: 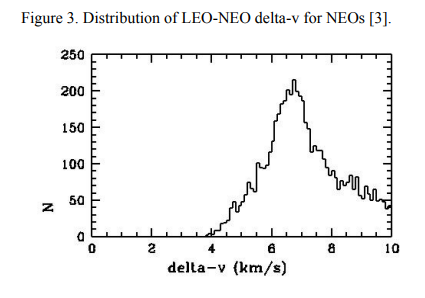 I was looking at something like this (asteroid mining) but I was more concerned with the size of the asteroid. I use the small body ferret database to get a smaller list of asteroid names. Then I looked at the orbits and more data on the JPL Small-Body Database Browser.

After looking at several asteroids orbital diagram I starting to wonder about their speed and quickly realized that there is no fixed delta-v. The asteroid speeds up as it gets closer to the sun and slows down as it travels away from the sun (apsis).

Then ... there is the how close is it going to get and when. I was surprised to see some asteroids get really close to Earth's orbit but at the wrong time, meaning Earth is in the other side... and depending on the asteroid's orbit, it may take years/decades to come back.

Regardless ... it takes time to find good candidates. Good luck.

Not the answer you're looking for? Browse other questions tagged orbital-mechanics asteroid near-earth-object or ask your own question.

18
Is this what station keeping maneuvers look like, or just glitches in data? (SOHO via Horizons)
14
Was the Apollo spacecraft always gravitationally bound to the Earth-Moon system?
6
Can dust be in orbit around a spacecraft which orbits the Earth or Moon?
9
Have there been any documented mini-moons since 2006 RH120?
4
Do ("non-halo") Lissajous orbits have stable/unstable manifolds?
2
Did DSCOVR travel "along the stable manifold of its future SE L1 Halo orbit" to get there?

59
What resources could be gained from asteroid mining that would be worth the effort?
10
Geosynchronous orbits around other Solar System objects
6
Mining a near-Earth passing asteroid with profit?
9
Have there been any documented mini-moons since 2006 RH120?
6
What Platinum minerals are expected to be found in Asteroids?
3
How to achieve escape velocity from Ceres?
2
Can small asteroids in the asteroid belt be detected on the fly and how much of a threat do they represent for a human manned space mission there?
4
Stabilization of Lagrange point asteroids
2
Could a Gravity Tractor be used for mining asteroids?