Would it be practical to catch a rocket's exhaust to reuse it as fuel?

It's been some days that i think that would it be possible to make a ship that looks like this?

The idea is to catch the fuel as you go. Would this make any sense or the thrust would be canceled by the propellant hitting the collector?

Thanks and sorry for my bad paint skills 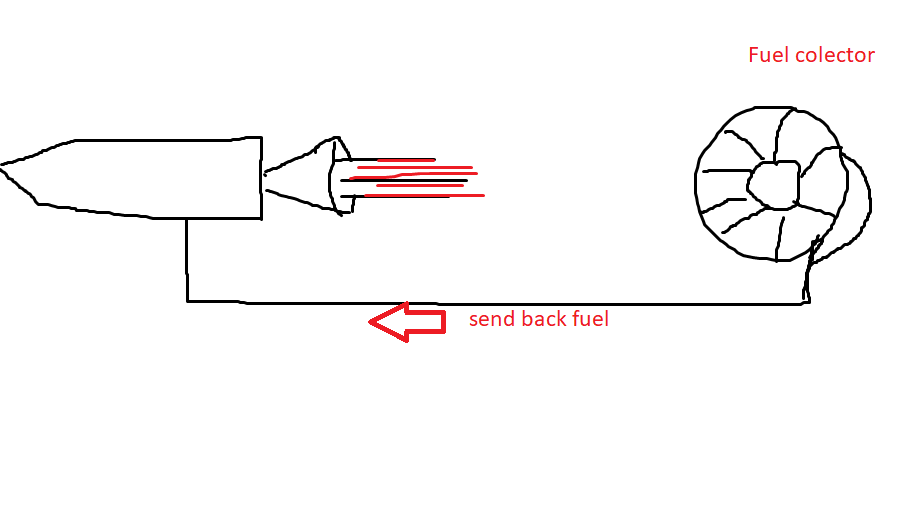 Like any perpetual motion machine, it won't work. In this case, there are two major reasons.

First, your "send back fuel" arrow is pushing mass forward; every action has an equal and opposite reaction, so pushing that mass forward pushes the rest of the rocket backward.

Second, the exhaust isn't fuel; it's already combusted, and the chemical energy of the fuel has been converted to kinetic energy. There's no easy way to convert it back. It's equivalent to taking the ashes and gases released from a wood or charcoal fire and trying to burn them again.

This is almost a space fountain.

But with an essential detail missing: The collector should not be connected to the ship, and instead be firmly anchored to the ground. The ground is a great sink for momentum!

Even closer to your diagram, but yet with the essential detail that they are not connected, two ships ping-ponging propellant between them would accelerate in opposite directions. The sum of momentum is still zero, but that's the case with a regular rocket too.

No, it would not be practical to do that.

It is theoretically possible to convert exhaust into fuel back again. I know rockets use different fuel/oxidizer compounds, like for example hydrazine and its derivatives oxidized by dinitrogen tetroxide, but let's consider a simpler example since the conclusion also holds if applied to all other fuel and oxidizer duos. If we used liquid hydrogen as fuel and liquid oxygen as oxidizer, the product of the combustion is going to be water vapor. It is totally possible to convert the water back into hydrogen and oxygen.

However, the problem with such approach is more fundamental: conversion of combustion products back into substrates (fuel and oxidizer) will require energy input, and more importantly, considering the second law of thermodynamics, it will always require more energy than was obtained from the combustion in the first place. Net result of energy gained vs spent will necessarily be always negative, no matter what method is used to split water into its constituting elements.

Any supposed solution to this fundamental problem would have to violate the laws of physics. And contrary to claims made in some other answers, it is not necessarily hard nor complicated to turn exhaust back into fuel and oxidizer. All water electrolysis requires is two electrodes and a source of electricity with voltage above around 1.23 V; optional, but highly recommended would also be a little amount of strong and electrolytically inert ionic compound like sulfuric acid or sodium hydroxide to increase the rate of reaction. The process itself is really simple, does not require any "cutting-edge" (or whatever buzzword is trendy nowadays) technology and potentially anybody could conduct such process at home right now. And given sufficiently long time, even the products of wood combustion (assuming complete combustion to carbon dioxide, water, and mineral ash) will in some sense partly turn back into wood and oxygen, as growing trees absorb those substances back from air and the ground while undergoing photosynthesis. Such claims could suggest that it could be possible, but difficult and requiring the invention of some innovative technology, while it actually is possible, just would net energy loss and thus not make sense.

It also does not matter what method of reacting hydrogen with oxygen is used: combustion, inverse electrolysis in so called "fuel cell", etc. will always yield less energy than will be required to turn the resulting water back into hydrogen and oxygen.

A famous series of old pictures from 2010 shows a different, but similar in principle, impossible concept (click on pictures to see full-size versions): 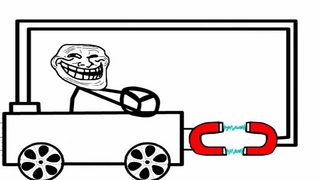 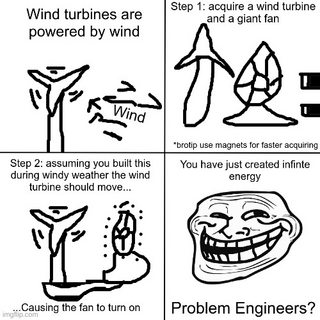 The original question referred to a scheme to "catch the fuel as you go" but did not state whether the line connecting a rocket image to a "colector" [sic] image indicated that two things were connected by a rigid body or two functional block designations were linked by a plan to send propellant from the collector to the rocket at some time with no rigid body connection between the two things. I choose the latter interpretation because it allows physical realization of the idea.
So it is completely practical to recycle the rocket exhaust. It need not be hydrogen and oxygen propellant. It could be methane and oxygen at a ratio of perhaps 3 kg oxygen to 1 kg methane in which case you should get exhaust gases such as carbon dioxide, water vapor, carbon monoxide and hydrogen. [Ben Munro, Mechanical Engineer] (https://www.benjaminmunro.com/liquid-oxygen-methane-engine-development)
Carbon dioxide can be converted back to methane using hydrogen in the Sabatier reaction. [The renaissance of the Sabatier reaction and its applications on Earth and in space] (https://www.nature.com/articles/s41929-019-0244-4) Carbon monoxide can also be converted to methane with hydrogen, a catalyst, pressure and heat. ["Adsorption and Desorption of Hydrogen, Carbon Monoxide, and Their Reaction Products on a Catalyst for the Synthesis of Methanol" by C. AHARONI and H. STARE] (https://cdnsciencepub.com/doi/pdf/10.1139/v74-603). Hydrogen can be recovered from water vapor by electrolysis. Recovery of hydrogen by electrolysis is an essential part of the recycling effort and it requires electrical power and time.
The suggestion to recycle rocket exhaust and a suggestion of how to do it has appeared on the internet. [RECYCLING ROCKET EXHAUST] (https://lunarpedia.org/w/RECYCLING_ROCKET_EXHAUST) I hesitate to offer this reference because I posted the Lunarpedia article so it is no more authoritative than I am but it shows that I am not plagiarizing. Of the physical possibility of capturing and recycling rocket exhaust, there is no doubt. It does not require an engineering degree such as I have to understand the concepts involved. Construction of a thirty mile long tube on the surface of the Earth's moon along the equator through which tube a rocket accelerates at 30 meters per second squared to orbit velocity would allow the capturing of most of the exhaust by closing the door after the rocket leaves. Horizontal acceleration to orbital velocity was the first means suggested by Sir Isaac Newton. [Newton's Orbital Cannon] (http://www.astronautix.com/n/newtonsorbitalcannon.html#:~:text=Newton's%20Orbital%20Cannon&text=British%20gun%2Dlaunched%20orbital%20launch,for%20space%20travel%20and%20rocketry.).
Vertical launches on the moon have the advantage that ullage thrust is provided by gravity. When a rocket is to be launched horizontally within a tube, electro magnetic launch assist by an electrically accelerated mobile launching pad can provide ullage while keeping the rocket in the tube. The electric launch assist also can provide 4% of mission delta v.
Since there has been no such rocket exhaust recycling facility built the percentage of propellant that could be recovered and reused by the original rocket after it returns or by another rocket is not well known. I offer a guess that a real facility could recycle better than 95% of the expended propellant. If the minority of the fuel that gets lost is replaced, a rocket could make repeated trips back and forth between two fuel recycling fuel depots and use the same fuel over and over again.

The answer must be qualified with a question: is the intent to directly use the exhaust as thrust or to use it as fuel to burn to create thrust? For the former, it would cancel itself out in the collection process in that it would be thrusting itself in the reverse direction, working against itself. In the latter, if there were any burnable fuel left in the exhaust, this would be an indication of an inefficient engine design, to begin with, and that needs to be dealt with to bring the efficiency as close to 100% as physics allows. As for Ion Drives, everyone seems to be assuming Fission power, which in addition to being highly unstable is extremely inefficient. Before they would be developed for use, it is more likely that fusion power would be harnessed and put to used to power Ion Drives. Remember, stars, including our own sun run on fusion...

If you ever come up with a chemical solution where re-burning exhaust looks look like a good idea, don't build this. It won't work because catching the exhaust cancels out the fuel consumption. It's easier to see when thinking of momentum rather than energy. You've got to leave reaction mass behind.

On the other hand, if you find the chemical solution, the correct thing to build is more like an afterburner; burn the fuel twice in the same engine without catching it; just make a much longer engine bell.

Not practical. There are several problems.

First, what comes out of a rocket's rear end is mostly not even fuel.

Second, the big cloud of fuel you see upon launch is mostly water that prevents the rocket from tearing itself apart with its own shockwaves.

Last, but the most importantly, even if the exhaust was actually a new fuel that combusted with its parts at cold temperatures and there was much more of it, it would still not be practical. It all comes down to one question. Even if you catch fuel, how are you going to get that fuel, quickly moving in the opposite direction from which you are moving, all the way back, bring them into your fuel compartments, recondense them, and make sure there is no access stuff, before finally getting to reuse the fuel? It takes energy to bring the fuel back, it takes energy to pipe it back into the compartments, it especially takes energy to recondense your fuel back to liquid and make sure there is nothing that would completely block the fuel pipes in the engine.

All in all, it would take more energy than simply bringing more fuel, not to mention it would slow down your ship because it has to keep dragging around that heavy wire and fuel collector.

The exhaust from a liquid-hydrogen liquid-oxygen rocket contains a great deal of unburnt hydrogen. The stochiometric mix is 8:1 by mass but such rockets run at closer to 5:1 for maximum specific impulse. The unburnt hydrogen adds thrust because it exits at very high velocity (high momentum) due to its low mass (compared with water vapor).

It is tempting to try to use the unburnt hydrogen in some way, but any attempt to bring along the extra oxygen is doomed to failure both because of the need to carry that extra oxygen and the need to somehow match its speed with the unburnt hydrogen in the exhaust. I'm guessing this remains true even for some sort of afterburner or ramjet concept using atmospheric oxygen for the first few kilometers of flight.

In the realm of theoretically possible but thoroughly impractical, consider that magnetic fields are ubiquitous in space. Charged particles as engine exhaust will follow helical trajectories. Put your collector at a point where the exhaust has traversed half a helical cycle. This transfers momentum to the magnetic field, yielding thrust without expending reaction mass.

Not the answer you're looking for? Browse other questions tagged rockets fuel design-alternative or ask your own question.