What is the value of the cross-track angle between the two designated CRS-4 first stage recovery zones?

For the SpaceX Falcon 9 launch on its Dragon/CRS-4 cargo delivery mission to the International Space Station, according to Spaceflight 101, two downrange safety zones have been identified:

The SpX-4 soft splashdown attempt will demonstrate a cross-track maneuver to bring the first stage down in a zone located off-track to assess the maneuverability during the propulsive boost back. Two safety zones have been identified for this mission, a ballistic splashdown zone and a target for the soft splashdown.

My best guess as to the importance of this so-called cross-track maneuver (with first stage descending off-track with an angle relative to the ballistic descent) is that SpaceX will need this capability on Falcon 9 (and later Falcon 9 Heavy) in case they proceed with the Brownsville, TX (Boca Chica Beach) launch site, so they can perform in-flight dogleg maneuver to avoid overflying oil rigs in the Gulf of Mexico that are considered to be populated areas and FAA wouldn't allow them to fly over them or attempt first stage landings in the area for range safety. Combined with recovering first stage off-track, this ability could enable SpaceX a large selection of future launch and first stage downrange recovery / landing sites. 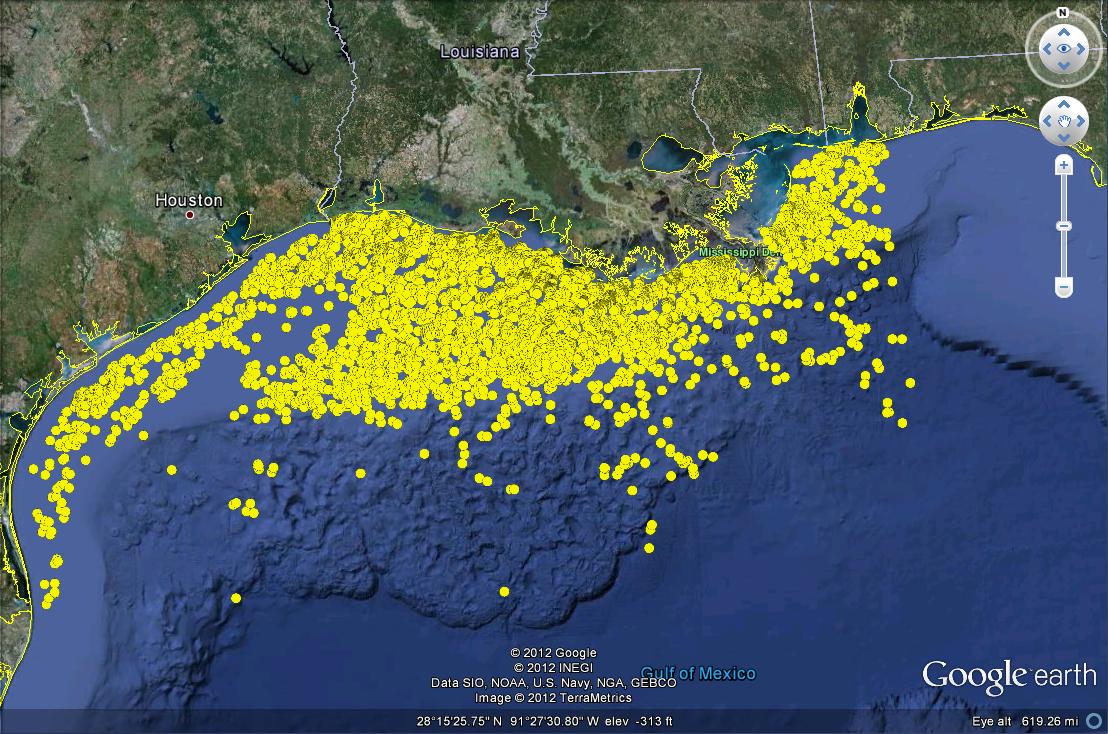 Google Earth view of US offshore oil and gas platforms in the Gulf of Mexico. Data: BOEM. Credit: Rob Shell

So the achievable angle between the two tracks (ballistic trajectory and the off-track trajectory, what I referred to as cross-track angle in the title) does have potential significance. If there are other uses for what I describe, do please mention it in your answer, but the main question that I have is rather simple;

Has it been published anywhere what the value of this cross-track angle between the two CRS-4 mission safety zones for the Falcon 9 first stage landing is, or alternatively where exactly have they been designated to be, so I can calculate the angle myself?

Surely, since these would be safety exclusion zones, maritime and aviation traffic advisories were published by USCG and FAA, respectively?

A Reddit thread contains a user-made map that might be useful. You can blow the original up, but here's a screen shot: 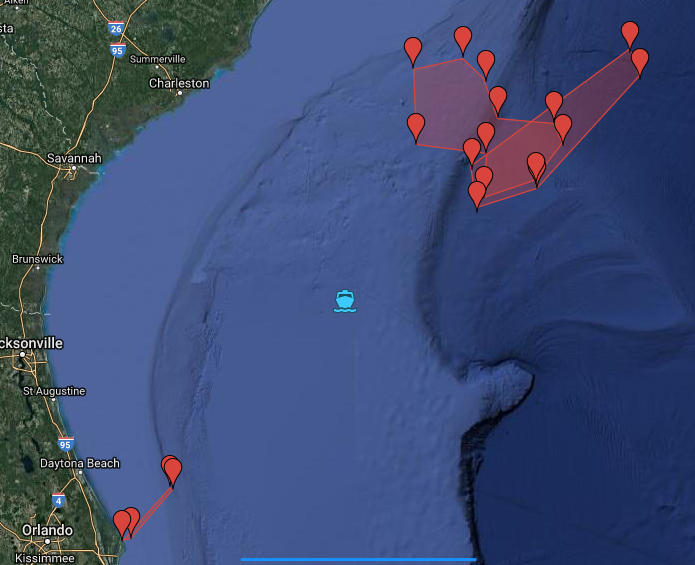 See the thread and associated links for more info.

Not the answer you're looking for? Browse other questions tagged falcon-9 landing reuse booster-flyback dogleg-maneuver or ask your own question.

9
Are the Falcon 9 landing legs aerodynamic surfaces as well?
10
Through what mechanisms would SpaceX test and examine the returned CRS-5 first stage?
8
How long does it take to recover the first stage of the Falcon 9?
8
Is it probable the Red Dragon will successfully land on Mars on the first try?
4
Can Falcon 9 first stage landing final burn using one, two, and three engines? Tradeoffs?
8
How will they lower the landed side boosters after landing, if there is a nose cone?
4
Reuse statistics of SpaceX Dragon capsules?
11
After Crew Dragon launch abort, was Falcon 9's detonation intentional?