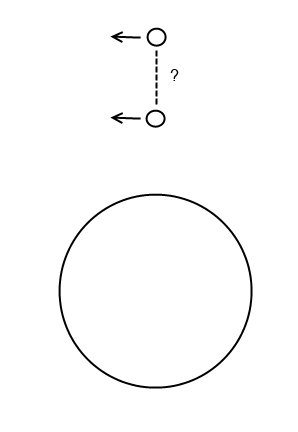 Is there an existing name for this?

Can this be stable, or will it spin out of control?

How strong of a rope will I need?

For the sake of argument, let's say:

Technically, what you're describing is called tethered formation flying. Dynamics of such systems are rather complex, but it's simple to say the way you proposed it in your example wouldn't work without constant propulsion to account for different orbital decay rate and attitude control to maintain their rotation rate along the velocity vector constantly aligned so it's oriented towards each other along the tether.

This would have to be done on both ends and constantly, so you don't gain anything from maintaining such a system unless you really need the two satellites physically connected. Say to remove the need for them to communicate wirelessly with each other, which could be tapped into or the non-tethered constellation detected via compromising electromagnetic emanations of its members. Or the lower altitude end serves as an anchor mass for electrodynamic tether, and generates sufficient current that their attitude can be maintained via, say, magnetorquers.

In simpler terms, pull of the lower altitude satellite on the higher altitude one via tether and along the velocity vector axis, or v-bar, and making the lower one lag behind if they weren't tethered, would decay the system's orbit faster. Constant tug on the tether would inevitably pull the higher altitude end lower than what used to be our lower end of the system by simply increasing its orbital eccentricity to the point that its periapsis is below the Earth's surface half an orbit around the Earth later. In a sense, it would run aground, assuming it didn't burn up in the lower atmosphere first.

Smaller scale tethered formation flying is possible though, and if they're close enough to one another, the distance between such formation's members can also be maintained by electromagnetic force alone. See e.g. Department of Defense (DoD) SPHERES-Resonant Inductive Near-field Generation System, a.k.a. SPHERES-RINGS experiment, also demonstrated during one Space Station Live (YouTube video). The experiment is meant to test wireless power transfer and formation flight using electromagnetic fields. Before the link disappoints you though, we're talking of stretch of an arm distances here, not nearly two thousand kilometers between them.

Also see other types of momentum exchange tethers. Perhaps the most similar to what you're after could be considered the skyhook concept, and what I describe would happen to it if it was following orbital altitudes from your example, for a moment at least, would be similar to the rotovator concept, with the exception that its final periapsis would be too low and you'd end up with 1,840 kilometers of extremely strong and thin cable crashing at its terminal velocity towards the densely populated equatorial regions.

Yes you can. It would be a gravity gradient stablized vertical tether.

There are two forces at play: force of gravity and what we used to call centrifugal force. Centrifugal force isn't actually a force, just inertia in a rotating frame.

Acceleration from gravity is $GM/r^2$ and centrifugal acceleration is $\omega^2r$ where $\omega$ is angular velocity given in radians/time. r is distance from central body's center.

For the lower object, $GM/r^2$ overwhelms $\omega^2r$. For the upper body $\omega^2r$ dominates. This keeps the tether aligned vertically.

You can see this sort of stablization in our solar system. There are many tide locked moons.

As Tilda Wave mentioned, the lower end is deep enough in the atmosphere that atmespheric friction would likely bring it down. Orbital debris is relatively dense in low earth orbit. Even if the tether is thin, the great height gives a big cross sectional area -- there is a likelihood the tether would be cut.

If we assume regular circular orbits around the earth for both satellites then they will start with quite different speeds.

They would have a speed difference of almost a kilometer per second. At these speeds it is safe to say that a rope would snap and that both satellite would get a jolt.

If you do not assume that and carefully place the two in a non-circular orbit or one where one if trusting, then it gets more complex than a can quickly answer (and given two post which already appeared while I was writing that other probably understand those complexities better). 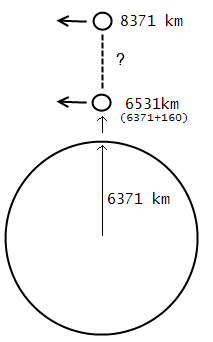 Centrifugal force has nothing to do with satellite movement as it is too low to counteract the gravity.

In order to stay together, at least one of the satellites should have a certain mean of propulsion, as his orbit would decay otherwise.

You can calculate here http://www.csgnetwork.com/satorbdatacalc.html To stay in orbit, the 160km satellite should have a 87 min orbit revolution time, and the 2000km one - 127 min. So no, they cannot stay at the same distance from one another.

For a space elevator, the satellites must be geostationary, and that is only possible ( without propulsion ) at 35,786 km and a speed of 3.07 km/s.

4
Could two satellites in the same orbit, but phased differently, be tethered in a sustainable manner?