The "Face on Mars" photograph taken by Viking 1 in 1976 of the Cydonia region on Mars has multitudinal similar sized small dots in a seemingly random pattern all over it. Are all those dots impact craters and if not what are they? 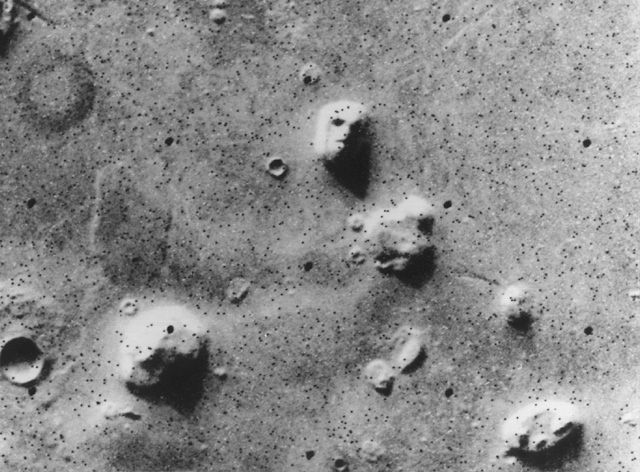 Are all those dots impact craters and if not what are they?

They are artifacts of some sort.

They could be salt and pepper noise, but I suspect not. If it was salt and pepper noise the image would also have lots of white dots, which it does not. These artifacts are instead missing data. The standard standard approach with regard to imagery errors traceable to the pixel level is to give the suspect pixels an off-scale low or off-scale high numerical value (which appear as black or white) and mark them as suspect or missing in the metadata. Quoting from photojournal.jpl.nasa.gov,

The speckled appearance of the image is due to missing data, called bit errors, caused by problems in transmission of the photographic data from Mars to Earth. Bit errors comprise part of one of the 'eyes' and 'nostrils' on the eroded rock that resembles a human face near the center of the image.

Not the answer you're looking for? Browse other questions tagged mars identify-this-object photography viking or ask your own question.

64
How is stacking oranges in 24 dimensions related to receiving and decoding signals from the Voyagers?
9
What caused Cydonia mesas, such as "The Face on Mars", to be created?
4
How are signals transmitted in space?
3
Why is this "grainy footage" of a Martian (sky) from Curiosity so grainy? Cloud snaps by Opportunity look great!
1
Which Viking-1 orbiter photo is this? When was it taken and what part of Mars is shown?

11
Any explanation for morphology of within crater formations on the northern Nili Patera caldera of the Syrtis Major volcanic plain of Mars?
11
Features on border of a crater & ravine on Mars
5
What happened to the Viking 2 Orbiter?
1
Which Viking-1 orbiter photo is this? When was it taken and what part of Mars is shown?
8
Has Curiosity ever taken a good hard look at the dirt covering its top surface? Can it? Have individual particles been sized?
6
What are these Martian space-whale (or seagull) shaped features?