What's this dark, ceiling-mounted hemisphere in Tianhe module of Tiangong space station? Any counterpart on the ISS and if so what does it look like?

The first crew of the Tianhe core module of the Tiangong space station has been hard at work and already complete their first space walk.

In this official photo there is a dark hemispherical structure, perhaps roughly 10 cm in diameter in the upper left corner protruding from the "ceiling" (opposite side to the surface with the foot restraints).

Question: What is this dark, ceiling-mounted hemisphere in the Tianhe module of the Tiangong space station? Is there a counterpart on the ISS and if so what does it look like? 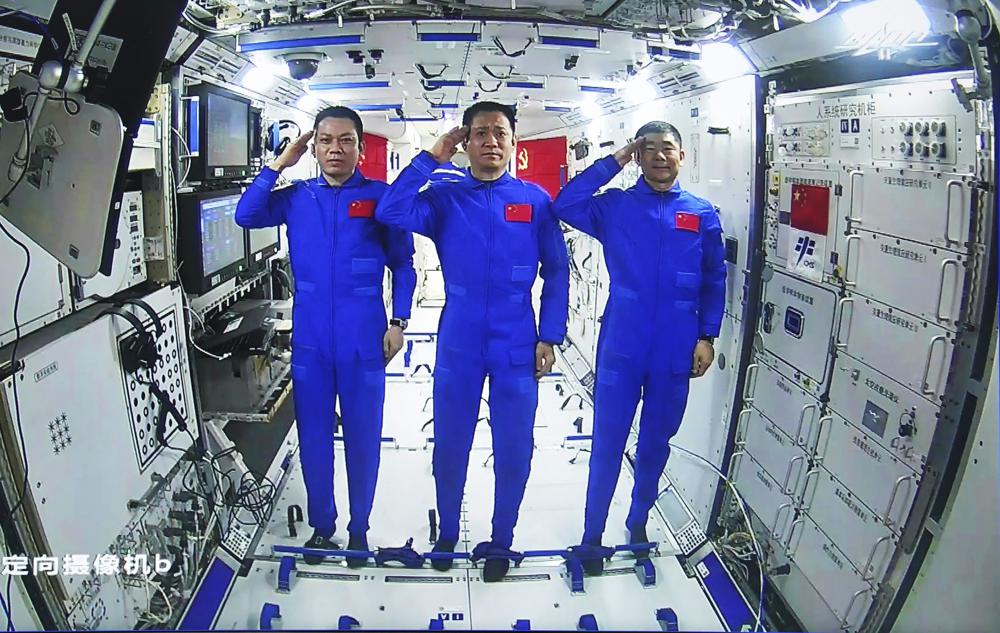 Is there a counterpart on the ISS and if so what does it look like?

Using the working hypothesis that the "dark, ceiling-mounted hemisphere" is a ground-controlled camera, then no, there is no counterpart on the US side of the ISS.

The answer to this question How closely can ground control monitor ISS astronauts? discusses the inability of Mission Control to watch the ISS astronauts in the US side of the ISS without their co-operation.

The Camera is called 'Tianhe Inner Gimbal camera B'

It is a CCTV dome, but it was stowed/uninstalled when first seen.

(This is a partial answer, as it doesn't answer the ISS part) 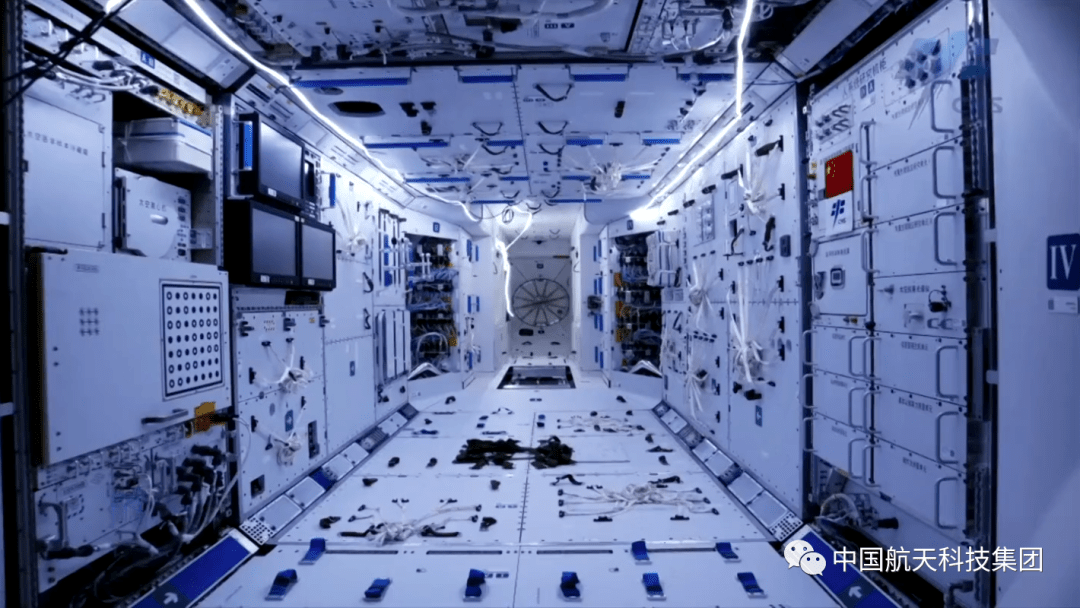 After the crew enter: 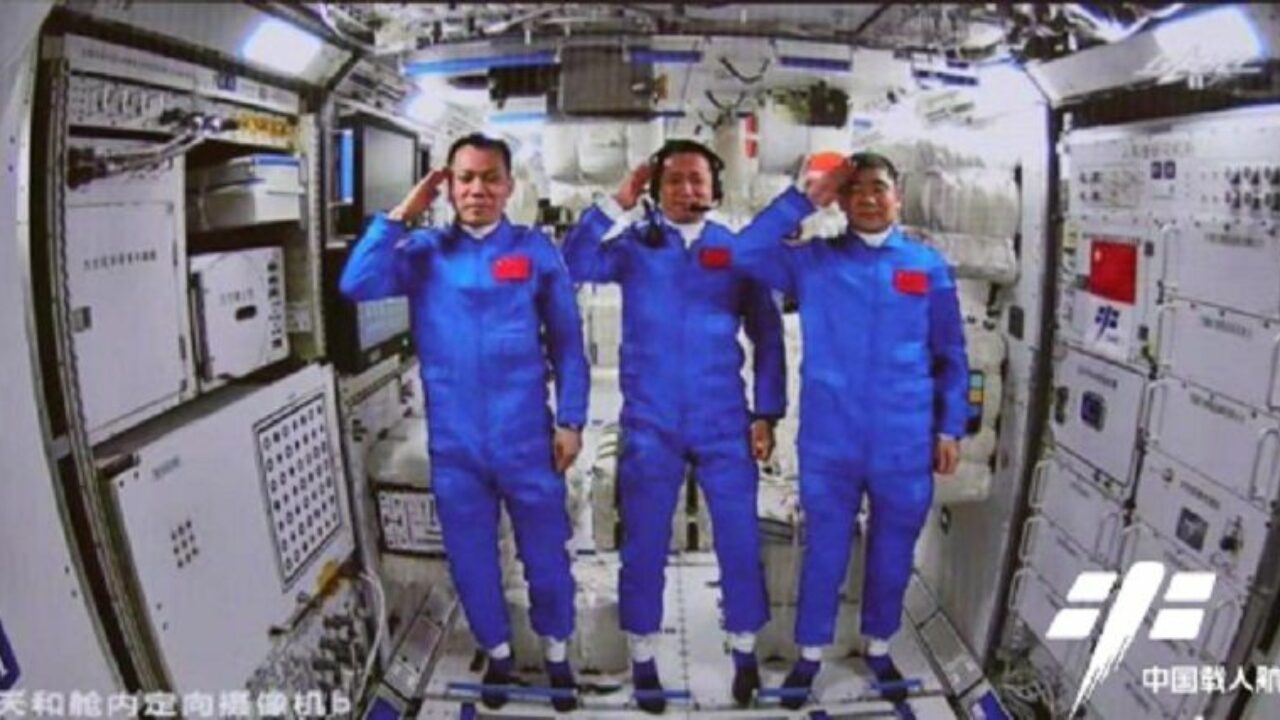 So between arrival on 17 June, and before President Xi Jinping's address to them, the crew do a variety of work, some of which is televised: first night, unpacking, eating, etc. 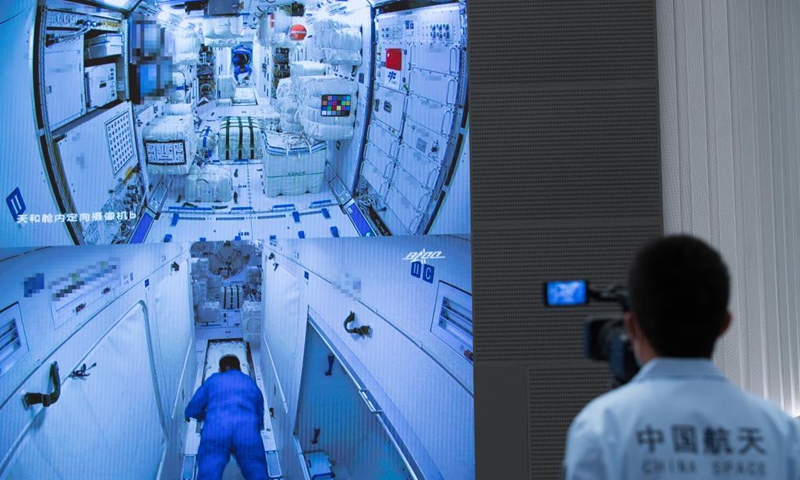 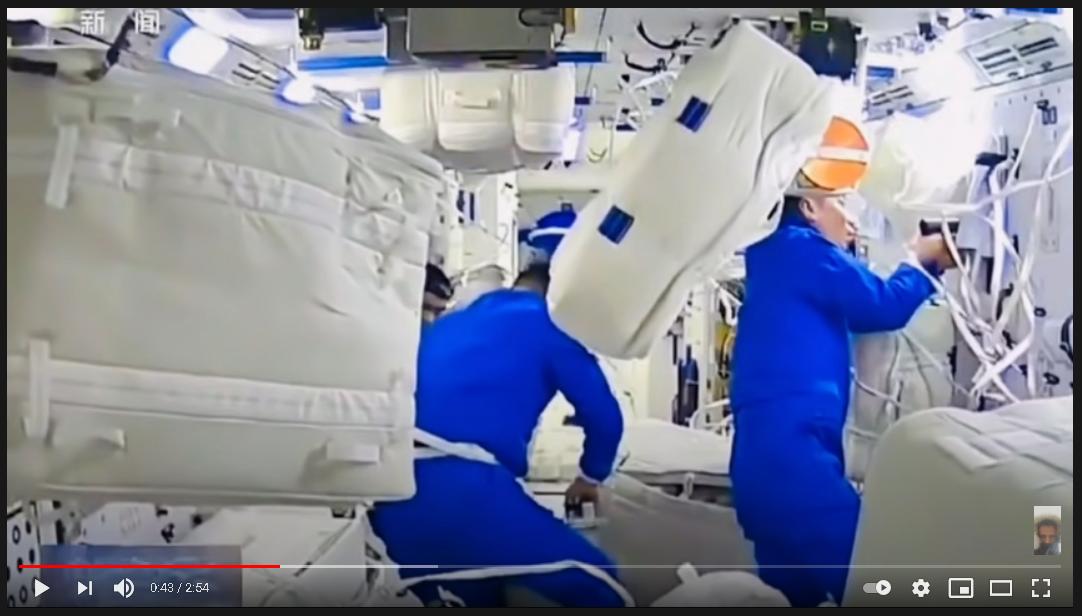 On the 18th they install WiFI.

This coincides with the appearance of the camera.

Given China's level of technology with this and the implementation of 視覺監控系統 visual surveillance system (https://inf.news/aviation/80b6088cc2b36dc2af2e73e151ddc0db.html) and the "time-triggered Ethernet spaceborne prototype system" creating a "smart home", these most likely networked IP cameras, would be part of that system of monitoring.

To keep an eye on the well-being of the crew, Tianhe was fitted with an acoustic and optical alarm system to act as an early warning system on the ground for surveillance

In doing this, there is no need for the astronauts to stay awake and be on guard at all times 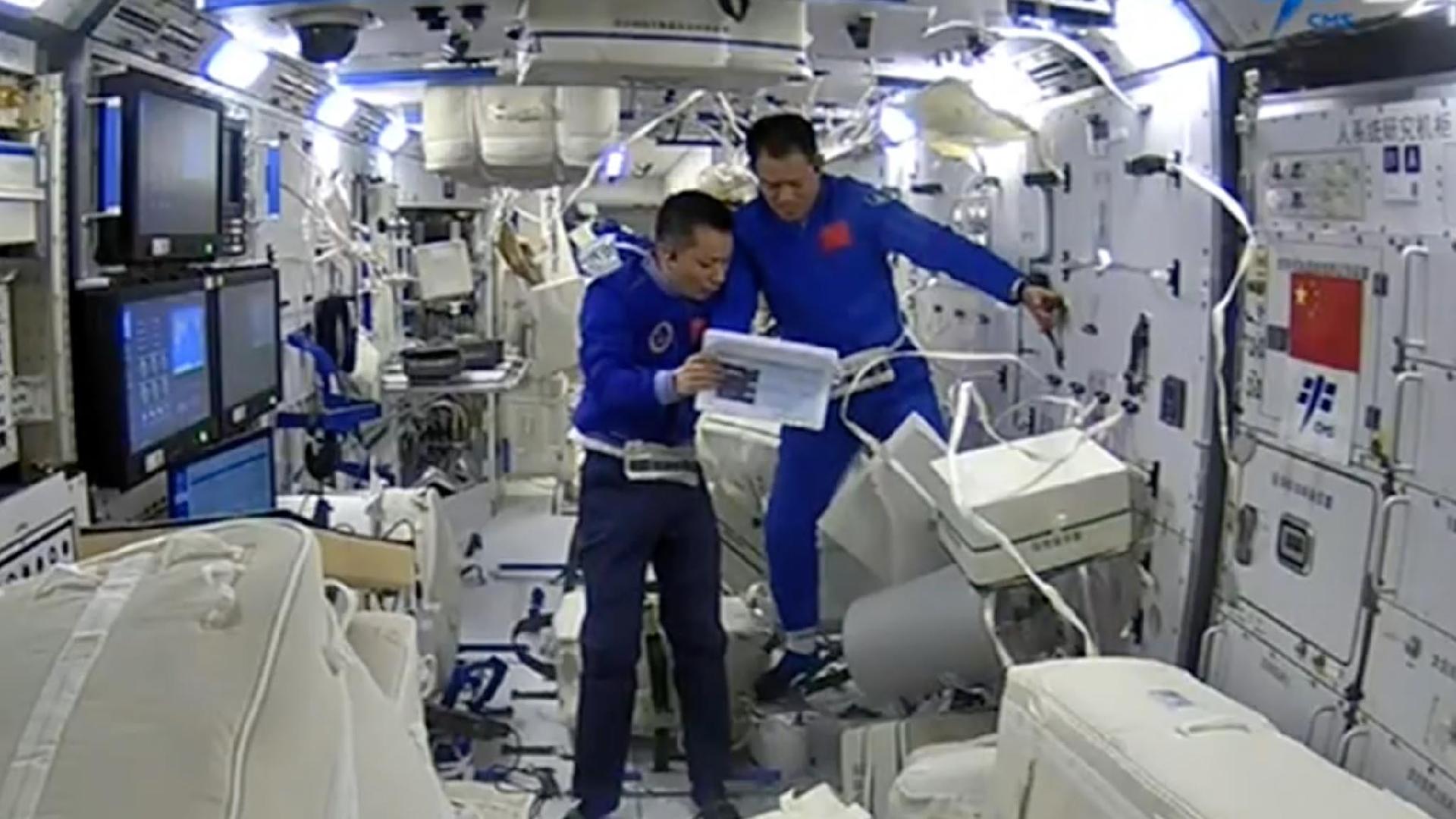 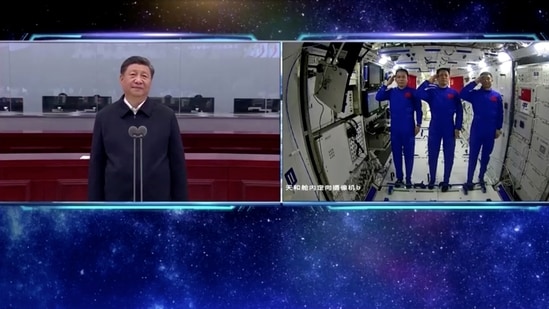 I have a feeling it might be the package attached to the ceiling next to it seen in early pictures.

The ceiling is a false ceiling, and so whilst the cameras protruded quite far down in previous examples, this one can be seen to be part recessed in the ceiling so it is less in the way.

According to pictures from inside Shenzhou and the earlier Tiangong-1 and 2 stations, they had (smoky) domes with substantial housings.

The televised video shows that it is a PTZ/Gimballed camera that can pan, tilt and zoom.

That camera is labelled as such: 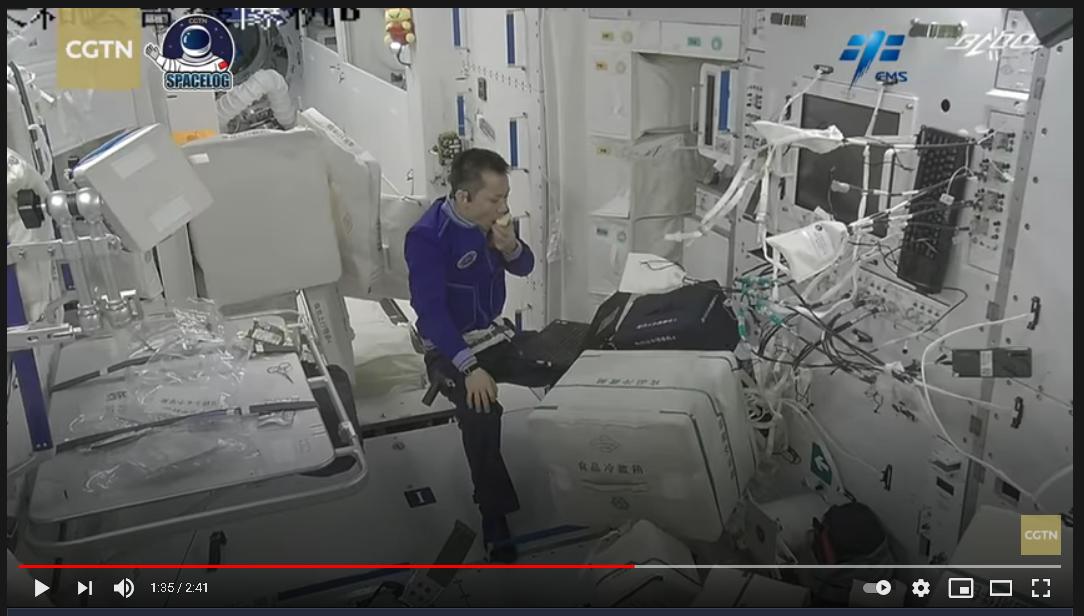 Other implementations of closed circuit television cameras internally on other craft: 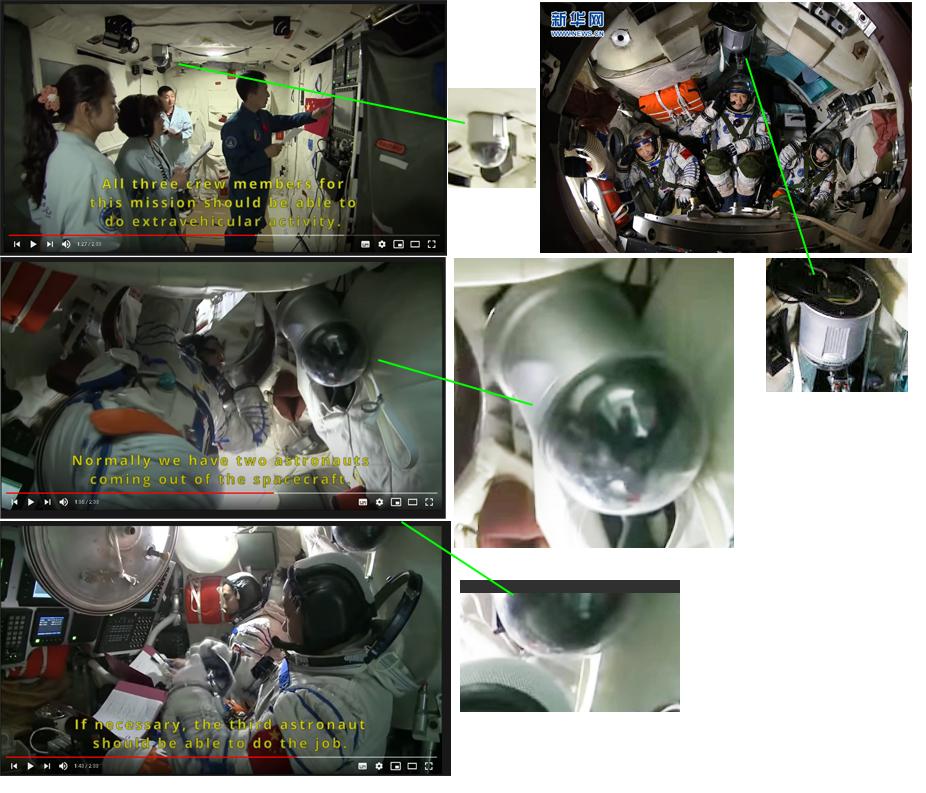 Other cameras are fixed:

The main cameras televised, showing main interior with control center left and another showing from Node to main interior along sleeping quarters, are labelled the following:

Everything after 23 June shows the dome present, including the most recent footage of the EVA carried out on Sunday 4 July. 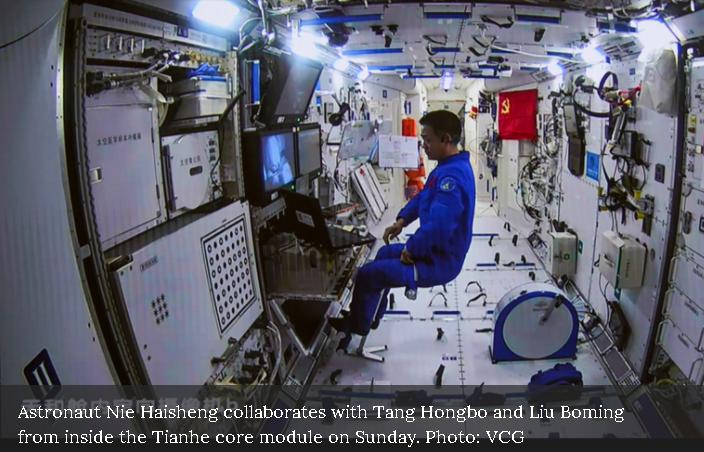 The following was just some other idea i was following but it fits this answer too:

on a different note, not related to the dome in the ceiling: (https://www.rmrbwx.com/rmrbwx/57027.html)

the core cabin of our space station has at least 3 cameras installed on the bulkhead of the camera position, one is used to shoot the scene inside the cabin, that is, the camera we watch live broadcasts, and the other two (or more) are one. Group machine vision system.

It is used for spatial scanning. This is a part of machine vision. After the camera vision calibration is adjusted, a group of cameras or a moving camera can be used to three-dimensionalize the space.

Ground personnel can observe the space station in all directions without blind spots, and can even use VR technology to observe information that cannot be reflected in ordinary two-dimensional monitor photos.

And through processing, the astronaut's motion characteristics will also be presented in a three-dimensional recognizable state.

The crew of China's Shenzhou 12 mission salute for a photo inside the Tianhe core module of the Tiangong space station after successfully docking at the module on June 17, 2021. (Image credit: CMSE)

Not the answer you're looking for? Browse other questions tagged tiangong-space-station tianhe-core-module or ask your own question.

13
Do ISS astronauts notice, or experience symptoms of elevated CO2 levels? Do they wear monitors regularly?
6
Did the NASA PhoneSat actually try to use the GPS from the phone itself?
8
Where can I find access to information provided by CNSA and Chinese scientists and reputable science authors?
4
How closely can ground control monitor ISS astronauts?
3
What is or are the official English names for the eventual space station being built by China, and of the first module that's in orbit now?
2
When reading "the writing on the wall" in the ISS, which way is up?

3
What orbit-raising propulsion system will Tiangong use, and how does it differ from that of the ISS in terms of performance and technology?
1
What flag is flying over the landing site of the Shenzhou 12 crew astronauts returning from Tiangong? What does it say?
7
How close were Starlink-1095 and Starlink-2305 to the Tiangong Chinese Space Station?