Has Demonstrator-1 2021-006BX demonstrated a hydrogen-oxygen combustion engine fueled by electrolysis yet?

A NASA CubeSat will launch into low-Earth orbit to demonstrate a new type of propulsion system. Carrying a pint of liquid water as fuel, the system will split the water into hydrogen and oxygen in space and burn them in a tiny rocket engine for thrust.

PTD-1’s propulsion system will produce gas propellants – a mix of hydrogen and oxygen – from water, only when activated in orbit. The system applies an electric current through water to chemically separate water molecules into hydrogen and oxygen gases, in a process called electrolysis. The CubeSat’s solar arrays harness energy from the Sun to supply the electric power needed to operate the miniature electrolysis system.

These gases are more energetic fuels than water; burning hydrogen and oxygen gas in a rocket nozzle generates more thrust than using "unsplit" liquid water as propellant. This strikes a better balance between performance and safety for spacecraft propulsion, meaning CubeSats will get more bang for the buck.

"What’s new is that this system uses water as the fuel in an energetic way, with an inherently safe system," said Mayer. "This mission will show that we can use water electrolysis in a rocket engine in space – that’s pretty cool."

HYDROS is a hybrid chemical/electrical technology to provide propulsion using water. It uses an electrolysis cell to split water propellant into gaseous hydrogen and oxygen that are stored under pressure in separate tanks. The system then burns the hydrogen and oxygen mix in a simple thruster nozzle to provide up to 1 Newton and a specific impulse of 258 seconds. This propulsion system is being developed by Tethers Unlimited, Inc.

However it does not mention an engine that burns hydrogen and oxygen and derives thrust from the exhaust exiting through a nozzle, and instead says it uses electrospray thrusters for propulsion:

The primary goal of the first Pathfinder Technology Demonstrator spacecraft is to flight qualify and characterize a novel micro-electrospray thruster provided by Busek Space Propulsion and Systems.

Each PTD mission consists of a 6-unit (6U) CubeSat weighing approximately 11 kilograms and measuring 30 cm × 25 cm × 10 cm. Each PTD spacecraft will also be equipped with deployable solar arrays that provide an average of 44 watts of power while in orbit. 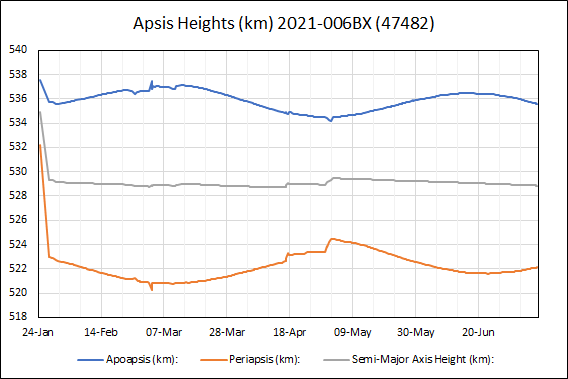 Looking at the orbital period we can identify 5 clear orbit raising maneuvers: 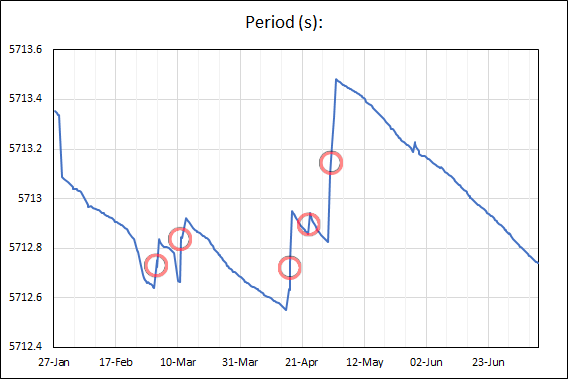 For a total delta-V of ~0.66 m/s, significantly less than the ~100 m/s it is theoretically capable of given it is "carrying a pint [473 ml] of liquid water as fuel" (first link in question + Isp spec from Tethers Unlimited datasheet).

It also appears that its mission could be over (first link in question):

Its flight demonstration, lasting four to six months, will verify propulsion performance through programmed changes in spacecraft velocity and altitude executed by the water-fueled thrusters.

It hasn't performed an orbit raising maneuver since the end of April 2021 (~3 month since launch).

Not the answer you're looking for? Browse other questions tagged propulsion engines cubesat water technology or ask your own question.

4
Is it correct to say that a LH2/LOX rocket uses water as propellant?
5
How will GomX-4B manage angular momentum when using butane thrusters to move?
5
Got Milk? Why is the term "colloid" used in "Colloid or Electrospray thruster"?
3
Could the kinetic energy in the Sun's solar wind power an ion propulsion system for an interplanetary spacecraft?
3
What makes CAPSTONE-1's eight hydrazine thrusters so "super small, high-performance"? How do they work without any tank pressurization?