Did the Voyager spacecraft use a Golay, a Reed-Solomon and/or a Hamming code for data transmission encoding for error correction? (Need clarification)

The now-famous answer to How is stacking oranges in 24 dimensions related to receiving and decoding signals from the Voyagers? is worth stopping now here and going back and reading first.

Okay welcome back! @NgPh's comment under the question links to Channel Coding: The Road to Channel Capacity which is also very much worth reading. It says:

The first major application of RS codes was as outer codes in concatenated coding systems for deep-space communications. For the 1977 Voyager mission, the Jet Propulsion Laboratory (JPL) used a (255, 223, 33), 16-error-correcting RS code over $\mathbb{F}_{256}$ as an outer code, with a rate-1/2, 64-state convolutional inner code (see also Section IV-D). The RS decoder used special-purpose hardware for decoding, and was capable of running up to about 1 Mb/s [27]. This concatenated convolutional/RS coding system became a NASA standard.

1980 saw the first major commercial application of RS codes in the compact disc (CD) standard. This system used two short RS codes over $\mathbb{F}_{256}$, namely (32, 28, 5) and (28, 24, 5) RS codes, and operated at bit rates of the order of 4 Mb/s [28]. All subsequent audio and video magnetic storage systems have used RS codes for error correction, nowadays at much higher rates.

But sources quoted in How is stacking oranges in 24 dimensions related to receiving and decoding signals from the Voyagers? and in comments below the question and the answer suggest Voyager used a Golay code, and the term Hamming is thrown around a lot as well.

So let's nail this down:

Question: Did the Voyager spacecraft use a Golay, a Reed-Solomon and/or a Hamming code for data transmission encoding for error correction?

Question: Did the Voyager spacecraft use a Golay, a Reed-Solomon and/or a Hamming code for data transmission encoding for error correction?

And there's a convolutional coder in there as well.

The TMU [telemetry modulation unit] encodes the high rate data stream with a convolutional code having constraint length of 7 and a symbol rate equal to twice the bit rate (k=7, r=1/2)

Convolutional coding is a newer type of coding that gives better bit error rate reduction than block coding for a given symbol-to-bit ratio. In addition, the encoder is simpler to implement in hardware than a block encoder.

Found this table from DESCANSO that suggests Golay or Reed-Solomon encoding is used (w/ convolutional): 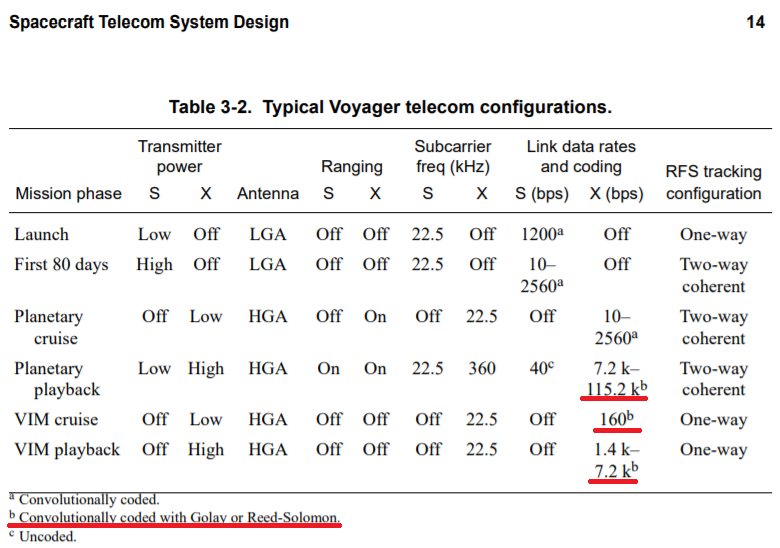 Edit 2.0, Should have read the whole thing first, from DESCANSO:

The Golay encoding algorithm used at Jupiter and Saturn required the transmission of one overhead bit for every information bit transmitted (100% overhead). Voyager carried an experimental Reed-Solomon data encoder, expressly for the greater communication range of the Uranus and Neptune phase of the mission. The new Reed-Solomon encoding scheme reduced the overhead to about one bit in five (20% overhead) and reduced the bit-error rate in the output information from 5 × $10^{-3}$ to $10^{-6}$

Not only were Golay and Reed-Solomon ("a special subset of [Bose-Chadhuri-Hocquehem] codes" which are "a powerful class of Hamming code", Brown, Elements of Spacecraft Design) used, convolutional coding was also used.

Not the answer you're looking for? Browse other questions tagged history voyager data-transmission computer algorithms or ask your own question.

63
How is stacking oranges in 24 dimensions related to receiving and decoding signals from the Voyagers?
12
What image compression algorithm did the Voyagers use?
5
What Voyager spacecraft hardware performed transmitted data coding in such a complicated way? Did ground decoding use “a big monster filling a rack”?
12
Can ESA control the two Voyager spacecraft?

20
How did NASA determine the distance and velocity of voyager 1?
3
What is the advantage of QPSK over FSK or ASK for satellite data transmission?
3
Did Voyager 1 and 2 record while not near any planets to get "ambient mechanical noise" for smoothing?
5
When scientific and engineering data are sent from space probes, are the signals repeated to minimize transmission error?
13
Did the 1202 error and associated reboot prevent disaster on Apollo 11 landing?
18
Where will the Pioneer, Voyager and New Horizons spacecraft be after one galactic orbit?
63
How is stacking oranges in 24 dimensions related to receiving and decoding signals from the Voyagers?
5
What Voyager spacecraft hardware performed transmitted data coding in such a complicated way? Did ground decoding use “a big monster filling a rack”?
12
What image compression algorithm did the Voyagers use?