Are there any markings that uniquely identify each Saturn-Apollo combination?

This question made me wonder: are there any markings on the Saturn I/IB/V launch vehicle, Apollo service module or command module that uniquely identify each vehicle (i.e. AS-5xx)?

It doesn't have to be a mission-specific marking; it may also be e.g. an externally visible identification of a stage, the instrument unit, or CSM that can be uniquely linked to a mission. For example, if a particular SI-C stage had a big #6 painted on it, it could be linked to AS-506, which was used in Apollo 11.

I thought that the IU had some white markings on its black exterior that were unique to each unit, but I cannot find a reference for that (so I may have made that up...).

The detailed flight log at apollosaturn.com reports that "exterior markings remained identical for all vehicles" from Apollo 9 onwards.

However, there were still some slight variations, even if the paint markings were the same. For example, they note that the Saturn II insulation type changed.

The instrument unit had some more visible differences. These pictures are all taken from approximately the same angle during launch:

For closer inspection, there was at least one visible serial number. It's only just visible in these pictures, but here it is on Apollo 13: 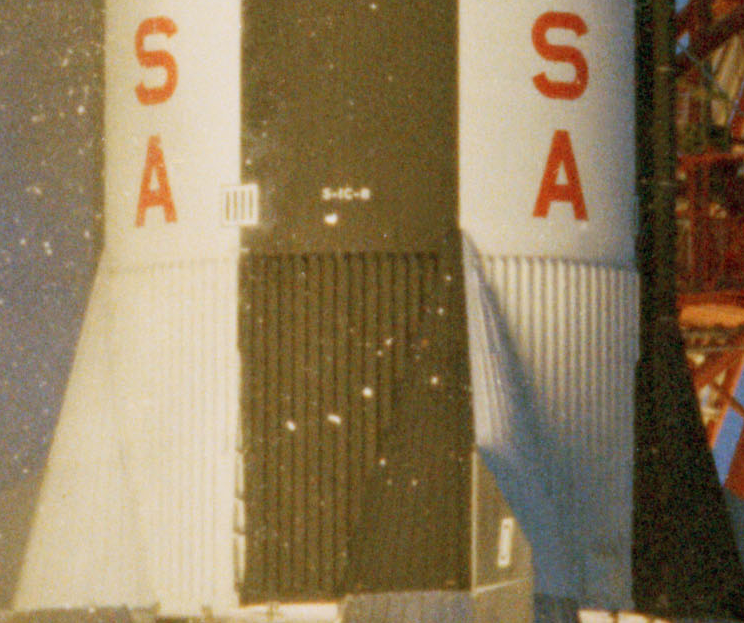 This is the serial of that particular Saturn IC stage (S-IC-8), and seems to have been applied from Apollo 8 onwards.

2
Does anyone know the source of this video?

29
Reasons behind the "Transposition, docking and extraction" maneuver
3
Can landing modules use left over fuel from earlier stages?
10
Why could the Lunar Ascent Engine be used only once?
7
Which Apollo-era contractors are still building aerospace components today?
15
Why was the Saturn V considered to be human-rated after Apollo 6?
5
Why/When was a crew of three considered in the first place?
28
How did they access the LM to mount the flag package while the Apollo stack was already on the launch pad?
4
Did any Apollo missions have enough fuel left to bring back the LM ascent stage?
8
How was AS-212 (Saturn 1B) supposed to carry both a CSM and LM?