Has there ever been an instance of asteroid discovery by radar; seen first by radar rather than being observed after optical discovery?

In a discussion below this answer to Can we use something like RADAR to detect asteroids? I'm complaining that the answer is essentially wrong;

Yes, radar is one of the useful tools for detecting and observing asteroids.

The answer goes on to talk about how radar is used to make measurements, and even that "Yes" link says:

I'd like to ask if radar has ever been used to detect previously unknown asteroids.

Question: Has there ever been an instance of asteroid discovery by radar; seen first by radar rather than being observed after optical discovery?

I find the other answer much more sound:

...Can RADAR be used to systematically detect NEOs that escape telescopes' detection? The answer is: YES, in principle, but it would be very very costly. RADARs have to rely on very directive transmitters. It can illuminate only a small portion of the sky at each time.

Partial answer to get things moving.

While so far I haven't found an asteroid proper that was first observed by radar, there are at least several examples of objects that were first discovered optically but that were subsequently determined to be binary asteroids or have minor-planet moons of their own.

However, checking the binary asteroids "87 Sylvia, 107 Camilla, 45 Eugenia, 121 Hermione, 130 Elektra, 22 Kalliope, 283 Emma, 379 Huenna and 243 Ida (in order of decreasing primary size)" from that Wikipedia article shows that their multi-body statuses were all determined by optical telescopes.

It now becomes difficult to say (for me at least) if these are asteroid discoveries by radar proper, or instances of learning more about a previously discovered asteroid by using radar to detect asteroid moons.

Radar observations during the 2017 flyby have shown that Florence has two moons. The inner of the two moons is estimated to have a diameter of 180 to 240 meters, the outer moon is between 300 and 360 meters across. Each moon is somewhat elongated, and both are tidally locked to the main body. They probably formed as loose material spun away from the main body as its rotation accelerated due to the YORP effect.

A team of NASA's Jet Propulsion Laboratory (JPL) (Pasadena, California) scientists led by Marina Brozovic and Lance Benner, made the discovery using radar imaging at NASA's Goldstone Solar System Radar on June 12 and June 14, 2009. They showed that the near-Earth asteroid 1994 CC is a triple system, which encountered Earth within 2.52 million kilometers on June 10, 2009. This relatively close approach to Earth made the discovery possible, as before the approach, scientists knew very little about this asteroid. In fact, 1994 CC is only the second triple system known in the near-Earth objects population. 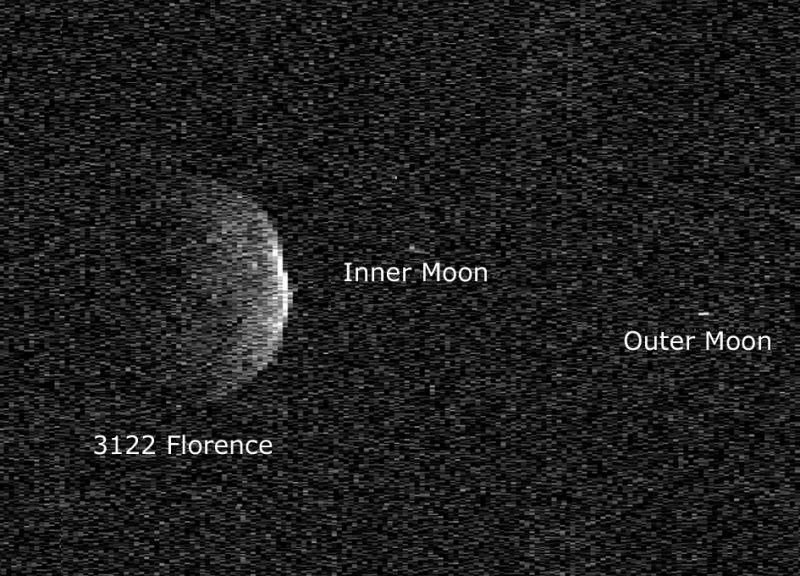 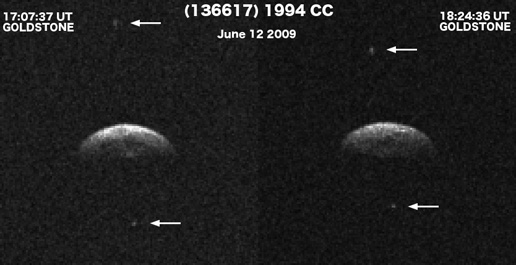 From What is the physical geometry of this apparent “eclipse” of a tiny moon of Asteroid Florence? in Astronomy SE:

below: "A radar image shows asteroid 3122 Florence and tiny echoes from its two moons. Here is an animation that shows them more clearly. The direction of the radar illumination (and thus the direction toward Earth) is at the top." From here. NASA / Jet Propulsion Laboratory. This is a small subset of the frames contained in the original 36 MB GIF, and the size has been decreased by a factor of 2 in order to fit in SE's 2 MB limit.

This question is sharper than a previous one, to which it is linked by an answer, considered as incorrect by @uhoh. The formulation "Has there been used to discover?" is more challenging than a "can it be used for detection?". The latter can be answered by a few engineering facts on capability, with caveats added for feasibility (to water down enthusiastic misinterpretations). The former requires in priniciple an exhaustive survey of the discoveries so far. Here is the full database, in case you are brave enough to take up the challenge.

A sharp question is not necessarily better. In my opinion the base question is "CAN RADAR be a better technique for searching for all NEOs, especially the hard-to-detect ones, yet potentially hazardous for humanity?".

This in turn calls for several interrogations: (a) Why do we need a better early-warning system?; (b) How have discoveries been performed so far and what are the short-comings?; and (c) Which new technologies could be in our road-map (RADAR among them)?

Answering these questions satisfactorily are far beyond my capability (and may need a full book). But here are some indicative clues that I have found:

-WHY DO WE NEED AN EARLY WARNING SYSTEM? It suffices to link these two facts:(a) the 2013 impact; and (b) the goal set by the US congress in the 2018 bill, Section 321. In Section 321, the set goal is to detect and catalog 90% of NEOs of size >140 meters, ONLY by the Year 2033. To put this into perspective, the Chelyabinsk meteor has an estimated diameter of ~20 m, a “too small” size to be contemplated for this goal. And yet, a 500Kg fragment of its meteorites has been found(!). Would it not be important to be able to detect the meteor, even a couple hours before impact?

-HOW DISCOVERIES HAVE BEEN PERFORMED SO FAR? Mostly passively, ground-based detections, in the visibility and infrared spectra. “Passive” means that the illuminator is not under our control (but “free”. Here, the Sun or the object’s radiation itself, if it does radiate strongly enough). The process involves taking “pictures” of a small portion of the sky at different times. Something that is “near-earth” must move in the captured pictures if the timing is set adequately. Basically it is a movement-detection, passive process. The main drawback of this process is that the favorable geometry puts the Earth between the illuminator and the target. Chelyabinsk is an example of an unfavorable geometry.

-WHY NOT “ACTIVELY” OR SPACE-BASED? “Active” means that we control the illuminator (time, direction, intensity, modulation), but the downside is that it is not free. You can play with this tool to have a first idea of the RADAR limitations. “Space-based” means that we put the detector in-orbit, possibly around the Sun.

Note that the US Congress Bill of 2018 mentions space-based technologies, BUT NOT RADARS (sorry to fans of Arecibo and like).

Discovery of objects on known trajectories (such as moons of known asteroids, of multi-body asteroids), YES.

Discovery of an object with unkown trajectory, very likely NO (see above discussions). For NEOs, it is possible to scan the database of discovered objects and have an definitive answer. The OP should know the existence of this database (otherwise the question is open-ended).

Not the answer you're looking for? Browse other questions tagged asteroid radar near-earth-asteroid near-earth-object delay-doppler or ask your own question.

10
Can we use something like RADAR to detect asteroids?