Is the ISS going to yaw and assume the XPOP attitude for Nauka docking?

I noticed this in the launch of Nauka MLM to the ISS.

(Previously I had assumed it would dock in a similar manner to Progress or Soyuz, that is coming from behind and underneath - this says the station will change its whole attitude, something not seen since the early years of construction) 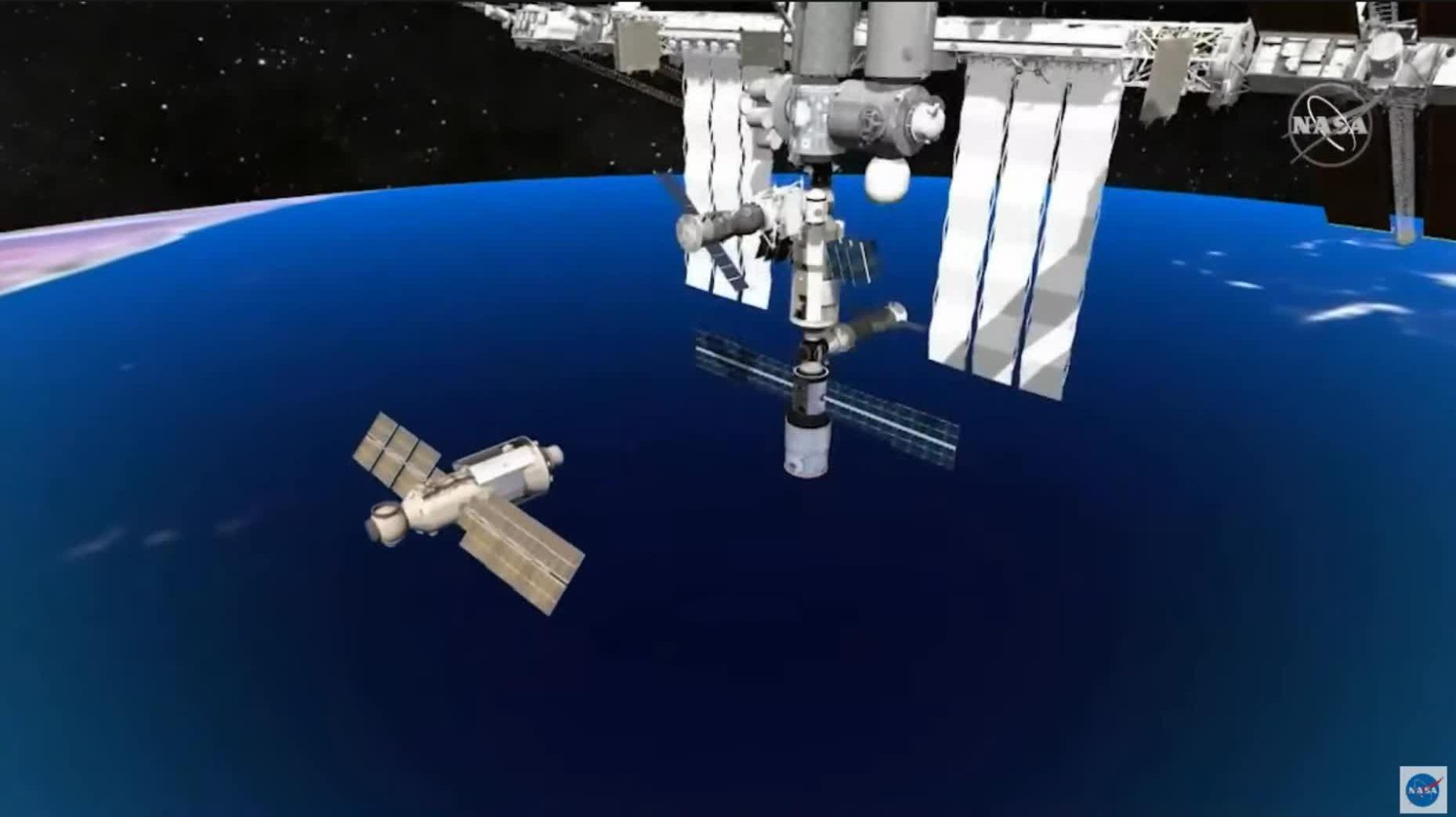 Image is from me screen capping my monitor!

XPOP means that the ISS X axis is perpendicular to the orbital plane.

Is the new ISS attitude for Nauka's docking going to be thus:

And then I am assuming again that the ISS will reverse its movement to regain TEA position.

Or will it 'follow through' with the yaw direction instead (completing a circle, if you will)?

So I guess my questions are:

That's a whole lot of questions for one post. So consider this a partial answer.

Here's the official MAGIK video showing the maneuvers. My former coworker made the video. Some of the other answers can be derived from the video.

The maneuver is called an OPM (Optimal Propellant Maneuver) which means very little fuel is needed. The space_station moves in all three axes of motion (called Yaw/Pitch/Roll) to complete the flip-around.

The plots shown below are for the 180 degree yaw maneuver carried out in the past week. This led to the station looking like it was flying backwards for a while.

In relation to the answer below and todays coverage of the Pirs module undocking:

The solar arrays will be ineffective. The SARJ gets locked for the duration of the maneuvering.

(Solar Arrays are always locked for these types of maneuvers)

Today it looked like (hard to see) they feathered the array. This might be to present the least amount of drag possible presented by the arrays during the maneuver.

about 2 hours for the maneuver which is apparently average. (I saw another quote which must be dated saying 30 minutes)

Sat at 180 for the longest time and the 90 pitch for the shortest.

for the attitude control: 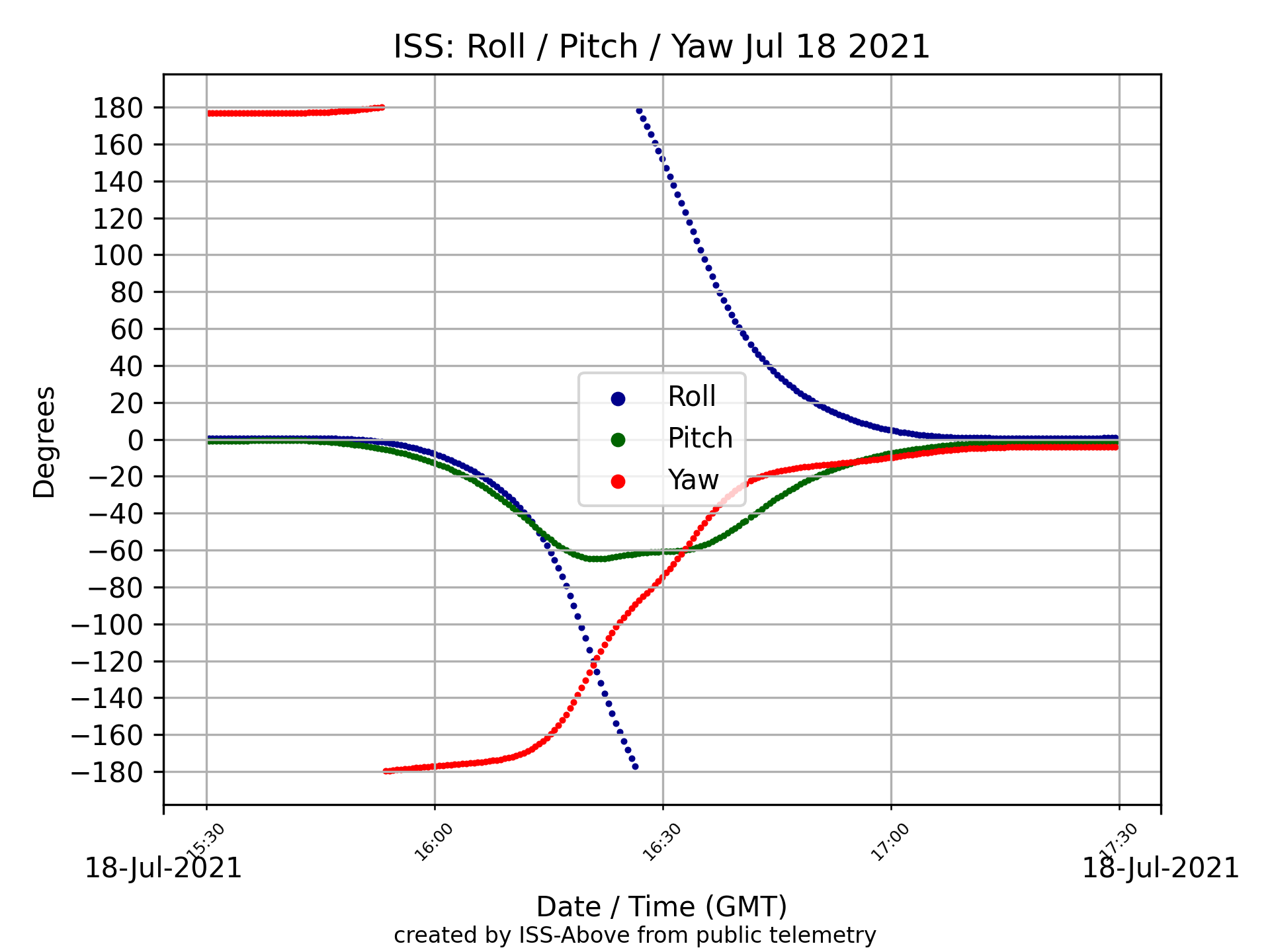 ypr for some of the panels during maneuver: 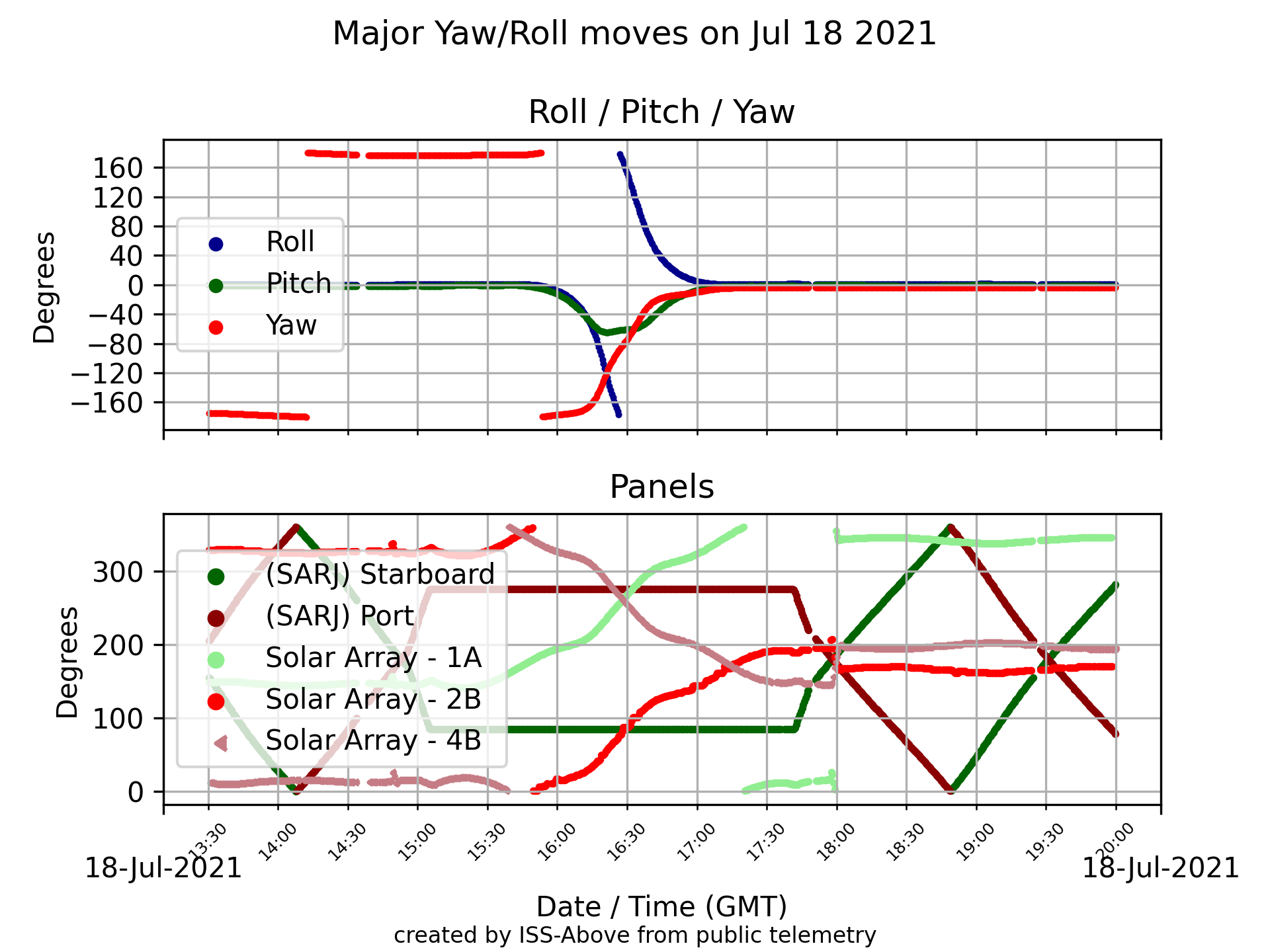 Not the answer you're looking for? Browse other questions tagged iss attitude nauka or ask your own question.

8
What's is this very CGI looking clip in this NASA video of the Alpha Magnetic Spectrometer installation?
4
Did the ISS just turn upside-down? Nauka docking attitude maneuvers; did the cupola near pointing zenith and therefore show only black sky w/ stars?
9
How are the orientations of the ISS' eight independent solar arrays optimized?
1
Why procure a separate de-orbit vehicle for the ISS? Why can't the ISS flip over and de-orbit itself?

11
ISS attitude during docking
6
How well could the ISS attitude control system detect periods of astronaut activity?
5
What attitude have past and modern manned spacecraft maintain(ed) relative to Earth?
3
How many times would two astronauts have to run around Skylab to turn it by 10 arc minutes?
5
Does the ISS yaw in orbit? And if so, why?
5
What is the purpose of orbital frame of reference for a satellite orbiting the earth?
3
Confusion with Apollo CSM attitude maneuvers (roll, pitch and yaw) during coasting to/from the Moon
2
ISS nodal precession
4
Did the ISS just turn upside-down? Nauka docking attitude maneuvers; did the cupola near pointing zenith and therefore show only black sky w/ stars?