What was the first Soviet/Russian spacesuit to use closed-loop ventilation?

What was the first Soviet or Russian spacesuit to use closed-loop ventilation, where the exhaust gases are scrubbed and re-used?

Not to be confused with this closed-loop cooling question.

First of all, in Russia, the term 'spacesuit' (скафандр) can be a little ambiguous as it refers not only to space suits, but to generally any suit that isolates a human from the environment and provides a living environment within. Going by that characteristic, the first closed- loop suits were developed very early on in the 1930s. These models (СК–ЦАГИ and Ч) had a closed-loop ventilation system already since the goal was to allow a prolonged stay in the stratosphere. The need for developing hermetically sealed suits led to the creation of the "Zvezda" R&D facilities.

"Zvezda" focused on development of different suits and egress mechanisms. Importantly for this question, they were tasked with the development of the pod for the animal launches into space (which Laika flew in), as seen below. 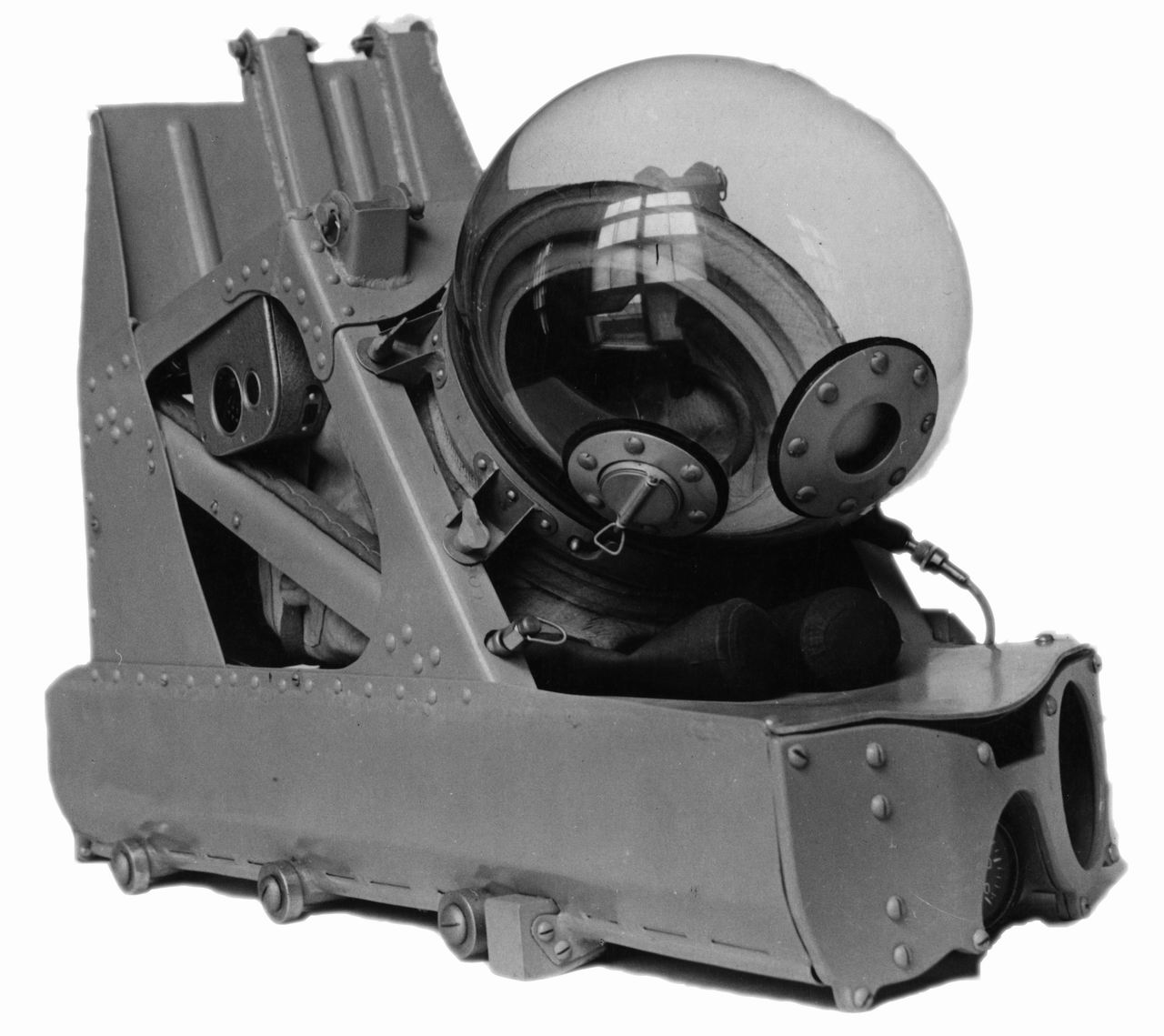 Technically, this is the first spacesuit with a closed-loop ventilation system, but this is stretching the definition of the word "spacesuit" a bit. So let's look at the spacesuits made for humans.

They were also made by "Zvezda". Indeed, up until "Berkut", the spacesuits were all open-loop. However, development of the closed-loop spacesuits commenced in 1966, a year after Leonov's EVA. Two spacesuits were developed: "Yastreb" (hawk) and "Krechet" (gyrfalcon), also known as "Krechet-94".

Yastreb (shown below) was intended for EVAs in orbit. It was used only once, when Khrunov and Alekseev moved from Souyz-5 to Souyz-4 though outer space in 1969. 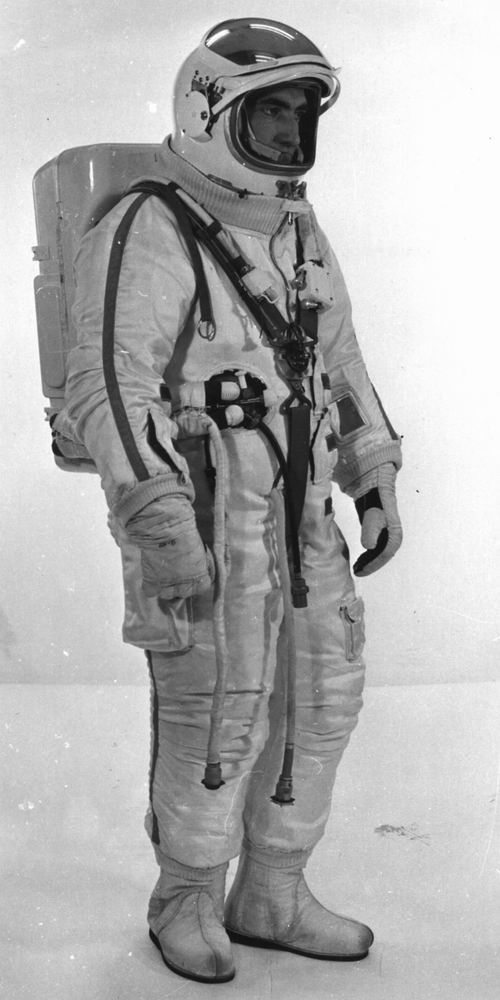 "Krechet" (shown below) was intended to be used by the Soviet moon program. It had a much more complicated design, including food/drink systems, waste processing, radio, telemetry. It had passed all the tests in 1969, but never saw any use as the moon landing program was cancelled. 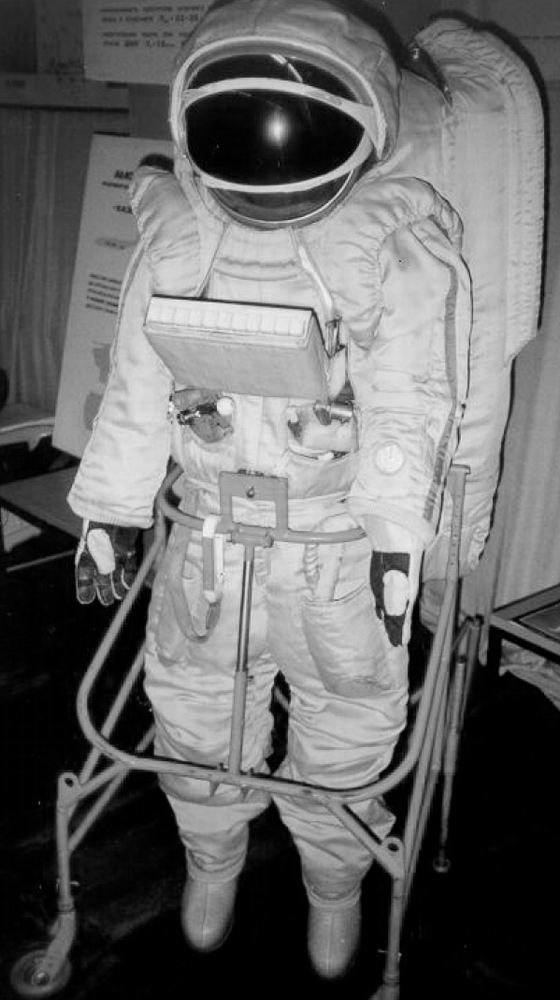 The direct descendant of the "Krechet" is "Orlan" (sea eagle), which was designed for use on the space stations and is used in the ISS to this day.

To summarize: the first Soviet spacesuit that had closed-loop ventilation and saw any use was "Yastreb". "Krechet" was developed alongside it and had completed all the tests in the same year as "Yastreb" was first used in an EVA, but it never was used in space.

Not the answer you're looking for? Browse other questions tagged spacesuits russia soviet-union spaceflight-firsts or ask your own question.

7
Do any spacesuit designs (including prototypes, conceptual, etc) use radiators rather than open-loop cooling?

13
Is the first Russian satellite still beeping?
10
What was the first rocket to use gimbaled thrust?
8
What was the first practical use of a satellite constellation?
12
Was the R-7 the first two stage rocket of the Soviet Union?
3
What is/were the Soviet/Russian qualifications for a capsule communicator?
7
Do any spacesuit designs (including prototypes, conceptual, etc) use radiators rather than open-loop cooling?
10
What were the first Soviet spacecraft to use an internal docking tunnel?
7
What was the first Soviet spacecraft that could recharge its battery it each orbit? Where were the photovoltaic cells made?
4
Was the teletype machine on MIR the first printer in space? Is there a photo, and what frequencies were used?