I had came across a simplified simplified rocket lateral dynamics model seen in this image below: 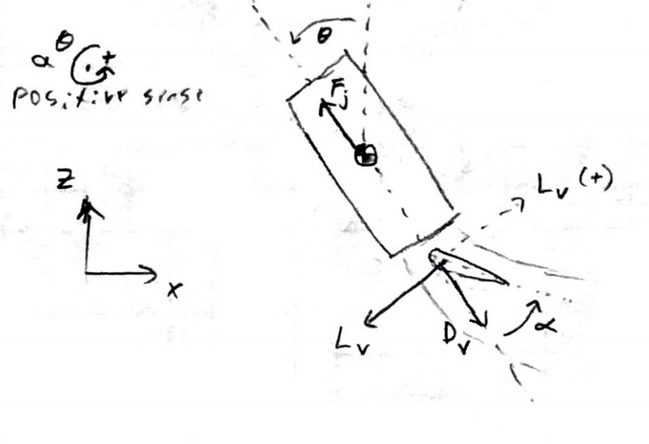 . It has vanes at the exit which generate lift force and can control the rocket orientation- the lift force is actually a ''side force'' which can impose moments about the rockets centre of gravity. The link :https://github.com/build-week/hover-jet/blob/feature/start-design-scripts/design-scripts/jet_vane_speed.ipynb contains more infomation by the author. In it, linear and angular momentum equations are present for the current orientation.

rv: Distance from vanes to rocket centre of mass

theta: pitch over angle of the rocket

The equations the author gives are correct.

Now for the confusion: The author has drawn an $L_v$ vector on his/her diagram pointing in the negative direction! They show the positive direction with that dashed line. This would then be carried through the equations with a built-in negative, giving the same result as your rewritten equations.

This is actually a common convention for body-centered coordinate systems for aircraft: forward (through the nose) and starboard (through the right wing) are taken as positive.

Not the answer you're looking for? Browse other questions tagged rockets thrust-vectoring or ask your own question.

5
How can I measure the thrust of a model rocket and get other statistics
2
Stability of rocket during flight; why does the lift force change direction when the center of pressure moves?
1
How to make a model rocket that doesn't spin?
1
Lift and Drag of a Model Rocket