Why do gps satellites rotate over the Earth

Why do gps satellites rotate over the Earth? Some says because of it there are at least 4 gps satellites at any location of Earth. But I can't understand it. 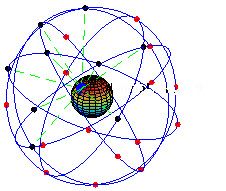 The only class of orbit in which a satellite always remains over the same point on the earth's surface is a geostationary orbit, which can only be directly above the equator. Putting the GPS satellites in such orbits would have several disadvantages:

For completeness, there would be some minor advantages to placing GNSS spacecraft in geostationary orbits, though these are outweighed by the disadvantages given above:

Not the answer you're looking for? Browse other questions tagged artificial-satellite orbit gps or ask your own question.

39
Why are the GPS constellation satellites in such a high orbit?
1
Do GPS receivers use trilateration or distances between satellites?
6
Would a GPS type system on Mars really need a ground station?
13
Will Glonass, Galileo, or BeiDou-2 satellites provide better cis-lunar navigation than GPS?
11
Why do so few satellites pass over the poles, and why do so many focus on the equator?
8
How many satellites would be required for Solar System GPS?
2
Do GPS satellites use the earth's magnetic field in any way?
12
Why multiple GPS satellites are never launched on the same rocket?
30
Could a Falcon Heavy really put six GPS Block III satellites in orbit at the same time?
5
What will the US government start to label its GPS spacecraft after SVN 99