Which star could Starship reach soonest?

We've been mocking Starship because it's not going to fly to another star, but according to this solar system delta v map it only takes 5.63 km/s from a Moon transfer orbit to Sun escape velocity. A 130 t dry (with 10 t payload) and 1330 t wet Starship with 380 s Isp has 8666 m/s, so it'd have 3036 m/s excess velocity. It could also fly by Jupiter for extra speed and/or a plane change.

Which star could Starship fly to soonest? Not just pass through its Hill sphere, but like fly by at 1 AU (or theoretically collide with it). Proxima centauri is about 4.2 ly away. At 3 km/s it would take 420 ka (kiloanni) to travel 4.2 ly. In 420 ka any currently near stars are long gone (nearest stars flying by). So the question is, which star could Starship realistically fly to, be there when Starship is there. Bonus question: What's the relative speed in the encounter?

PS: Someone suggested retanking starship with expendable tankers en route to Jupiter and gain 20 km/s with a burn at Jupiter. Much more expensive, but this is just theoretical and it's within specs of Starship and it seems to get us within the time frame of the passing stars diagram, so we can also consider this variant.

I think the comments have basically summed up the answer, but I would like to add a few numbers to the situation.

From what numbers I can find on Wikipedia, Starship will have a dry mass of 120 t and a payload capacity of ~ 100 t.

According to a tweet from Musk back in July 2019, a starship in orbit with a 100 t payload will have a remaining delta-v of 6900 m/s. I don't know if that's still the case, and the numbers you see floating about in various forums aren't detailed enough for me to really check that with my own math.

The picture you provided actually illustrates this fact quite well: 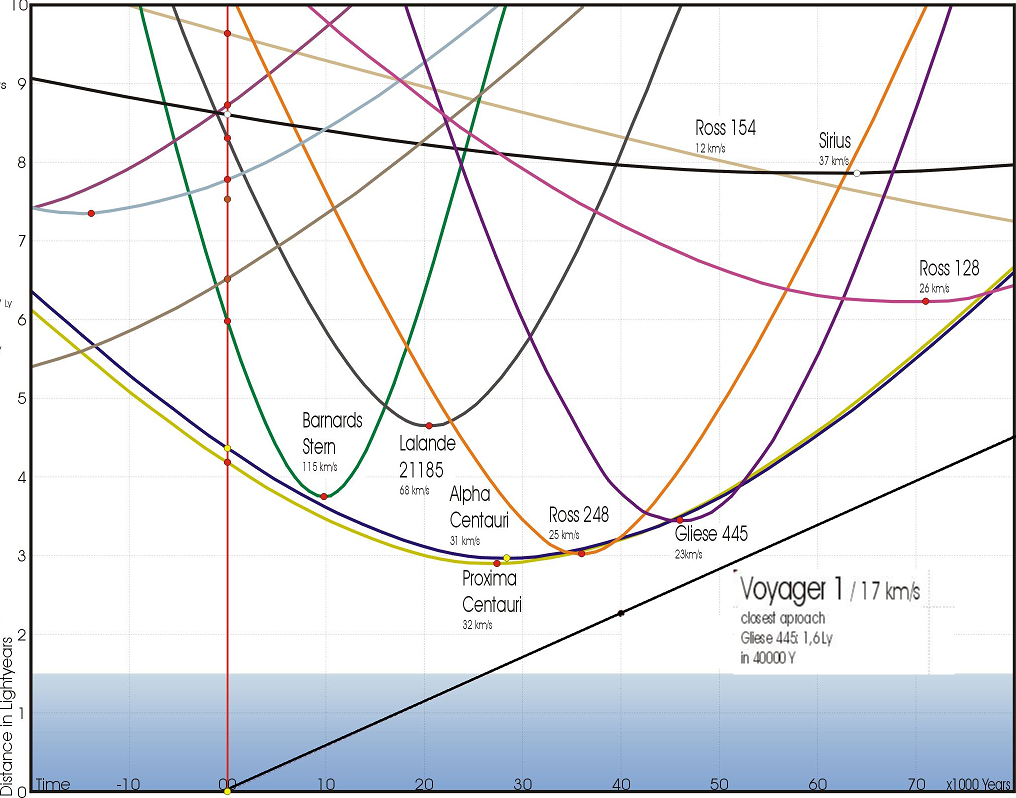 This diagram of distances expresses the very minimum you have to do to get to another star. The slope of each line represents its velocity. If you want to get to a star, your spaceship line has to intersect with one of the star lines.

As you can see, Voyager 2, at 17,000 m/s is nowhere close to having its line be steep enough to intersect with any of the stars, apart from Ross 154 possibly, if it remains on the same course. Given that the sated velocity for Voyager is similar to the calculated Starship velocity above, it's safe to say that Starship will never reach any of these stars.

What about other stars? Sure, it's possible that another star will make a close approach in the far future that is within Starship's reach, but after a certain point in time the trajectories of these stars becomes harder and harder to predict.

Not the answer you're looking for? Browse other questions tagged spacex-starship interstellar-travel or ask your own question.

18
If one Starship can transport 100 people to Mars, how many could it safely land near Mercury's north pole after one Hohmann-like transfer?
20
Elon Musk's ITS Travel Time to Mars Estimate
6
Research paper on 'Wait calculation' for interstellar travel
3
Starship reentry velocity on return from Mars: What are the options

7
Maybe I can't really reach the speed of light, but how close could I get?
3
Could space probe Voyager 1 or 2 reach Alpha Centauri?
4
How long could it take us to reach Alpha Centauri with current technology?
19
What can the ISS do that a SpaceX Starship could not?
18
How serious is the problem of interstellar dust for interstellar space travel?
2
Of all propulsion devices that could reach near-C speeds, which one is closest/most practical?
3
Could SpaceX Super Heavy (Starship) Booster reach Earth orbit without starship on top?
3
Can Starship reach orbit without superheavy, now upgraded as of Jan 2022 to 9 engines and stretched tanks?