What are these two devices extending from each end of the Progress MS16 cargo ship's solar panels?

CNET's See astronaut's wild view of a discarded ISS module burning up includes the image below. I've cropped, magnified and sharpened bits from each end of the Progress module's solar panels to reveal to devices mounted on extensions from them.

They have cylindrical bases and stout conical tops pointing in opposite directions away from the spacecraft. They look a little bit like omnidirectional GPS antennas one might stick on top of a boat or truck, but I've no idea what they really are.

Question: What are these two devices extending from each end of the Progress MS16 cargo ship's solar panels? 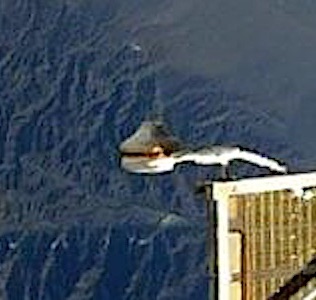 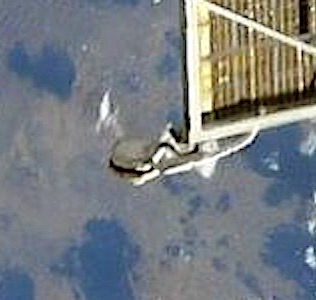 Original, from the CNET link above (click for full size): 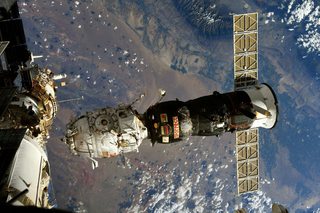 Peering at pictures of earlier Progress flights, these features were visible on MS-01 (62P) but not on M-28M (60P) which just has a couple of metal "pegs" instead. So it looks like an MS-series change.

Spaceflight 101 outlines the changes that were made in the series but does not actually nail down what bit is what:

Progress MS introduces a new KURS navigation system, a new radio, the use of GPS/Glonass for navigation, and the use of a proximity communications link for relative navigation. These changes will not significantly change the external appearance of the Progress except for the number of deployable antennas present on the spacecraft...

However, what looks like exactly the same equipment is seen on Soyuz MS-01 but not on TMA-20M. So it looks like it was a new feature across both the Soyuz and Progress MS series. The WP article for the Soyuz MS series includes:

The old 38G6 antennas are replaced with four omnidirectional antennas (two on the solar panels tips and two in the PAO) plus one S-band phased array, also in the PAO.

This sounds exactly like our devices. According to this detailed summary on RussianSpaceWeb, the 38G6 equipment was part of the flight control system, and is being replaced by:

...the ASN-K satellite navigation system, which could simultaneously use the GPS and GLONASS navigation satellites. The system would allow autonomous trajectory measurements by the ship's computers without reliance on ground stations.

So sounds like your "omnidirectional GPS antennae" was exactly it.

(Oddly it says the first flight of it was on Progress M-25M, not MS-01 - but possibly that was mounted differently for testing purposes? It doesn't seem to be visible on the panel tips in any photographs, which just have the old-style "peg" antennae)

Not the answer you're looking for? Browse other questions tagged identify-this-object roscosmos progress pirs or ask your own question.

16
What is different from the R-7 that launched Sputnik, to the Soyuz launcher used for Soyuz/Progress launches?
2
What are these two very large, round panels on opposite sides of AngoSat-1?
11
What are the two orange tabs stuck on opposite edges of each window of the ISS cupola?
21
What are these things fired away from a ballistic missile at launch?
10
What are these stacked panels on the ISS in this image?
4
What are these big shiny metallic "lumps" on the bottom edge of each Falcon Heavy nozzle?
3
What JPL laboratory is this exactly, and what are the functions of these amazing-looking control panels?
3
What are these two little valve stem-like projections from the Northrop Grumman STAR 15G upper stage rocket motor? Why doesn't the STAR 20 have them?
2
Into what non-navigable Pacific Ocean area did structural elements of the Progress MS16 cargo ship & Pirs module fall? Are there maps of these areas?