Are People Actually Serious About Mining The Moon?

I see a lot of enthusiasm about the possibility of mining the Moon. But worryingly, I don't see much said about the potential horrific effects of this.

I mean, guys: the Moon is actually pretty damn small, as you know. Removing its mass could slightly alter its wobble and, eventually, orbit.

We could end up with a situation as shown in the film Time Machine, where the moon was destroyed by lunar colonists, making the Earth uninhabitable. I have to say; I have a vaguely ominous feeling about this idea.

I suppose my question is: are they genuinely serious about mining the Moon heavily?

Uhoh asked who I mean by 'they'. I'm referring to prospector organisations and various nations.

Others have pointed out that the Moon is far from, as I put it, 'pretty damn small'. And that it can easily handle decades - even centuries - of mining with no adverse effects. Well, firstly, I meant the Moon is relatively small. Secondly, I just cannot shake the feeling that it's a bad idea to physically undermine (no pun intended) a celestial body that's so close to us.

Removing that much mass won't change the Moon's rotation or orbit detectably.

Yes, people are serious about mining the moon. Here's a US government contract. (Currently inactive as it was issued and due in 2020.) But it constitutes a serious solicitation, and request for quotation.

An excerpt from the summary:

NASA/NSSC has a requirement for Purchase of Lunar Regolith and/or Rock Materials from Contractor.

It has fun things in it like this: (which I have excerpted and reformatted to be brief)

Note that 500g is not a moon-wobble-worthy amount of mass.

The moon is rich in a few important natural resources, namely:1 2

Note that many of these are in very small supply by mass, and effectively acquiring them completely would not alter the moon's mass materially. Much of the ppm and percentages I provided are for the surface-level only; the deeper layers may never be touched at all.

The last person to walk the moon was a geologist named Jack Schmitt, who studied the composition on the moon. He's essentially the only natural or physical scientist who's stepped foot on the moon. He has since written a book, Back to the Moon (2007), which he proposes long-term renewed exploration and expedition to the moon, revolving around the nucleus of mining 3-He for energy production purposes as socioeconomic justification for such return. Demonstrating a political bias, he also delved into the goriness of a pro/con analysis of various private or public methods of achieving this, positing that some are better than others, and arriving at the dubious result that the private sector was the superior solution to this. In order for the detailed plans for lunar mining to be successful, it would need to attract significant private-sector investment, according to him,3 and the legality of who has claim over hypothetical mining operations remains unclear (theoretically nothing seems to prevent private ownership; the 1967 UN Outer Space Treaty only prevents political ownership).3 4

Either way, assuming that we could extract and find a way to use the Helium for fusion as a solution to the eventual decline of fossil fuel quantities available, and as a way to stem the effects of greenhouse gas emissions, the amount of Helium that would be extracted would only be a few hundred thousand tonnes at most, which is insignificant w.r.t. to the mass of the moon.

The moon is 73q tonnes, so assuming 1 metric ton removed each day, it would take 220 million years to deplete just 1% of the mass.4 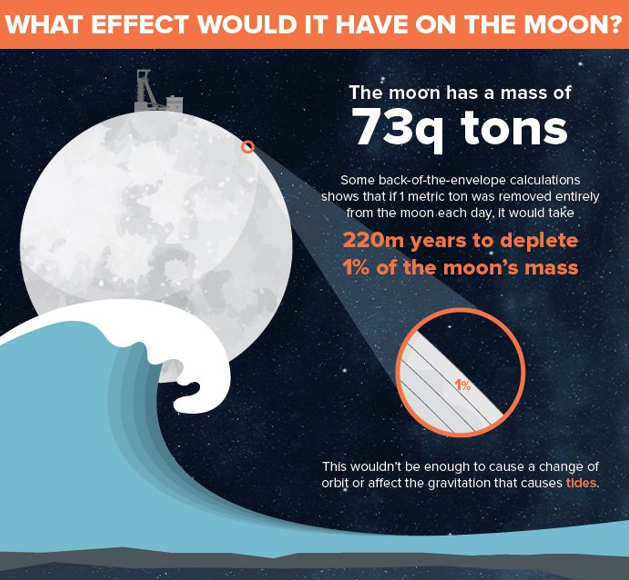 Need to make a cost-benefit determination as to whether or not the risks involved in causing some level of altered orbit or affecting gravitational tides is worth the value produced from extracting the natural elements on the moon. It appears that the risk is very low, assuming the rate of removal is steady and slow. For some things, such as REM / lanthanides, the risk/reward ratio looks fairly attractive because they are valuable but only represent a trifling small proportion of the mass. But the same could be said about Titanium, Iron, and Silicon near the surface.

It might be more correct to say there are people who are serious about liking the idea of mining the moon. There are no serious space agency programs or commercial enterprises attempting to do so. It should be noted that NASA and other space programs do look at in-situ resource utilisation apart from promoting the idea of a future - eventually - where mining space based resources could be commercially viable.

In-situ resource utilisation is technically "mining" but at very small scales - either to reduce payloads/improve overall mission capabilities or as experiments intended to show that it is possible to improve overall mission capabilities by such means. This allows use of mineral resources that would not otherwise be economically viable - in effect competing against high launch and transport costs, not against Earth's mineral resource costs. Economically viable commercial mining that exploits lunar minerals for use by commercially viable space industry or export to Earth is far beyond current capabilities.

It should be noted that there are no exceptional mineral resources of high economic value found on the moon - and very little likelihood of high grade ore bodies such as mining on Earth exploits; the geological processes that formed them on Earth are mostly absent. The presence of valued minerals at low concentrations is not sufficient to make them exploitable. Concerns that so much mining could be done that it could change the moons orbit have no real basis - there is no mineral resource there of sufficient value or abundance, nor technological capability to do so.

It does seem likely that high concentrations of nickel-iron (which may contain Platinum Group Metals at tens of ppm) will be found in impact craters but that may be the best commercial ore there is to be found - and that can be found in much greater abundance in asteroids and the metals they contain can be found and exploited on Earth at much lower cost.

It really comes down to the plans of future space explorers and what resources would be available on the Moon and how beneficial they could be.

Currently there are a lot of maybes. The Moon has water resources (as ice), it also has helium 3 and titanium. We don't know if any of them are present in economic quantities or how easy of difficult it would be to mine and process the resources. Ice and titanium would be useful now and in the future. Helium 3 however, is currently a bit of a dream for some. We first need to prove we can make the ever elusive sustainable nuclear fusion reactor.

Sourcing materials for space exploration on Earth and sending it into space is expensive, partly due to the strength of gravity on Earth. The Moon's gravity is $\frac{1}{6}$ that of Earth's which makes it easier to get things off the Moon and into the cosmos.

Stuff that is mined from the Moon and sent into space means the some stuff that could be mined on Earth is used on Earth. We may need that.

If we are to continue space exploration and expand our efforts, mining the Moon, Mars, asteroids, or whatever cosmic resources are out there are all potential options but we first need to quantify what resources are available and that will require further additional expensive exploration.

Flying a probe over the Moon can tell us what resources are present on the surface of the Moon as a thin veneer. It doesn't gives us the depth of such resources which is required to give quantities. Additionally we know nothing of the potential underground resources on the Moon or elsewhere. Is there copper, zinc or nickel 100 meters below the surface, or deeper? We need drilling rigs to give us that knowledge.

It's an recursive Catch 22 situation, we need funding and initiative to explore and discover potential. We then have to decide what that knowledge and discovered potential may be and whether it is worth repeating the cycle for more knowledge and potential. After a number of iterations someone will decide whether a mine will be established on the Moon, or elsewhere. Its performance will influence decisions about other potential mines on the Moon and elsewhere.

The common materials on the Moon(as well as asteroids, but most of the good ones are much further away and not practical momentarily) are very useful to humans and are far more accessible on the Moon than on Earth(most of Earth's stuff is in its mantle or core). Mining these materials on Earth's crust causes huge pollution that WILL kill in a matter of decades, rather than the millenia(at our current rate of material consumption) it would take to alter the Moon's orbit with mining.

"I mean, guys: the Moon is actually pretty damn small"

The Moon is huge by our standards, more than huge enough to power humanity's material needs for centuries with almost no change of mass(of course, we will advance technologically, but that also means going out to the asteroid belt to get even more materials).

Our current technological,"prowess" will barely make a scratch on the Moon should we go to mine materials there. The actual horrific aftermath is if we don't go back to the Moon to mine, and keep poisoning our planet. Don't worry about far-future humanity maybe altering the Moon's orbit. Worry about us, right now, poisoning our own planet in desperation for resources. The sooner we stop mining on earth and start mining on the Moon, the better.

Not the answer you're looking for? Browse other questions tagged the-moon mining planetary-protection or ask your own question.

14
Are there any resources available on the moon that could make a base commercially viable?
8
Mining Helium-3 on the moon and sending it to Earth?
3
Lunar satellite navigation system

20
Mining in microgravity: are there sound studies?
9
Mining and the transportation of resources
29
What did the sky actually look like from the Moon?
2
What does it (actually) mean when spacecraft are "intentionally crashed" on the moon?
9
Why are we concerned about Cassini contaminating Saturn's moons when we landed Huygens probe on one of them?
2
Most attractive resource on the Moon
8
Mining Helium-3 on the moon and sending it to Earth?