What did JFK mean by "and the others" in his "We choose to go to the moon" speech?

In John F. Kennedy's Moon Speech on September 12, 1962 at Rice University, what does "and the others, too" refer to in the following excerpt?

The specific part of the the following:

It seems to be part of the "that challenge is..." is clause referring to going to the Moon, in which case I'm not sure what it would refer to.

Alternately, does it refer to "do the other things" earlier in the passage, or something else?

I'm pretty sure it's a weak joke calling back to a previous reference in the speech.

But why, some say, the moon? Why choose this as our goal? And they may well ask why climb the highest mountain? Why, 35 years ago, fly the Atlantic? Why does Rice play Texas?

"The other things" here refers to climbing the highest mountain, flying the Atlantic, and Rice University playing [American college] football against the University of Texas. Rice and Texas have a long-standing football rivalry (now over a century old); "Rice playing Texas" is a challenge of particular resonance with JFK's audience at this speech. That brings us to the passage you cite:

because that goal will serve to organize and measure the best of our energies and skills, because that challenge is one that we are willing to accept, one we are unwilling to postpone, and one which we intend to win, and the others, too.

Assuming the same set of "others" here, this is superficially a puzzling construction. The challenges of climbing the highest mountain and flying the Atlantic had already been won, so it's nonsensical to talk about "intending to win" them. That leaves only Rice playing Texas, so my interpretation is that JFK is jokingly saying "we [the United States] intend to go to the moon, and we [his Rice University audience] intend to beat Texas."

Here's the printed script for the speech: 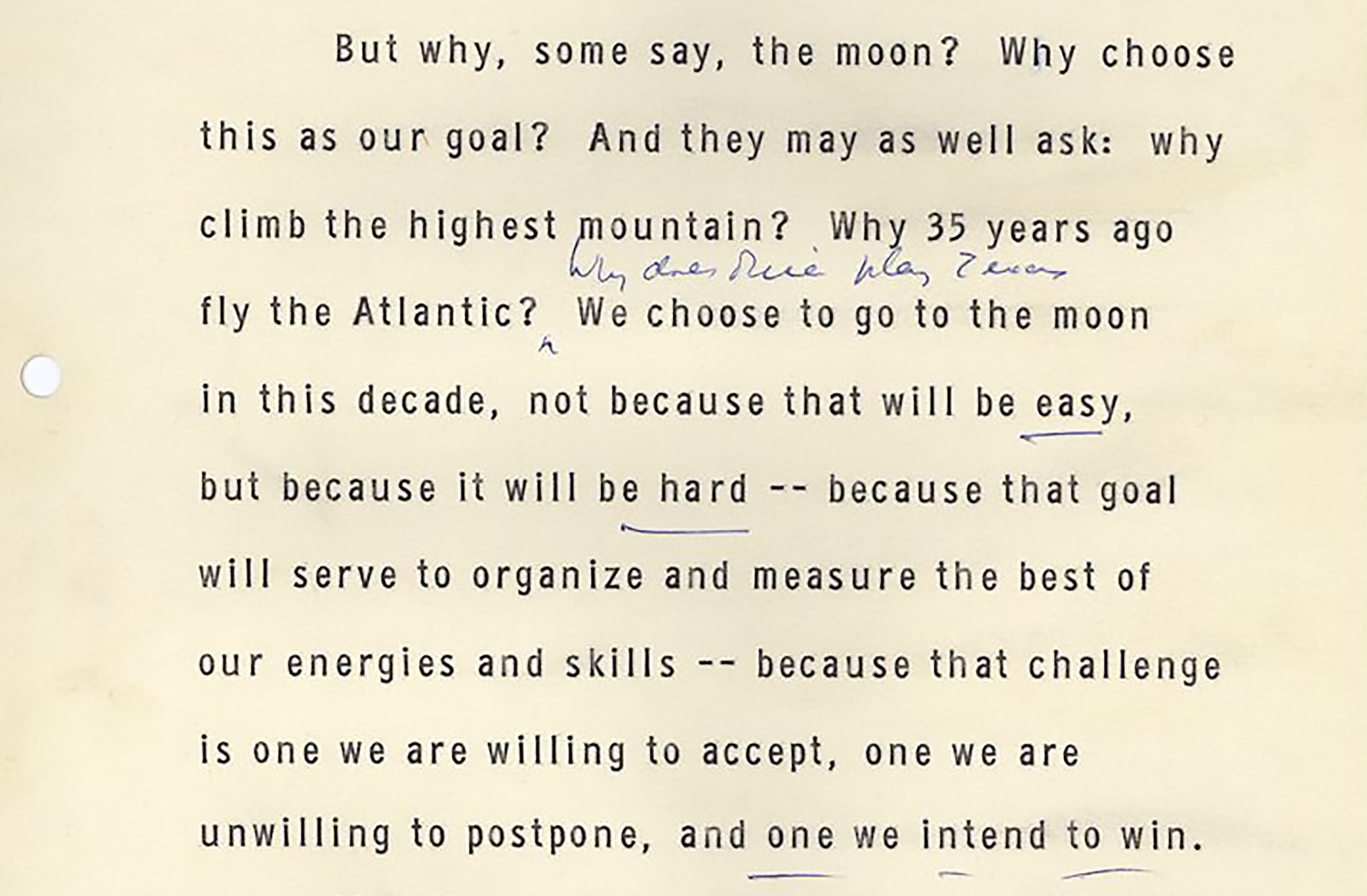 "Why does Rice play Texas?" has been handwritten in (possibly by Kennedy himself) -- a late addition to the text -- and the phrase you're asking about isn't present at all, strongly suggesting it was ad-libbed as a callback to the Rice/Texas reference, which might explain why it's so grammatically clunky.

At the time of the speech, Rice and UT were 5-5 over the previous decade despite UT being a significantly larger school. JFK's speech doesn't seem to have brought Rice much luck; Rice and Texas' next game, a little over a month after the speech, was a 14-14 tie, and in the forty-odd games between the two since then, Rice has only won twice.

"The other things" are the other goals of his administration mentioned earlier in the speech,

Yet the vows of this Nation can only be fulfilled if we in this Nation are first, and, therefore, we intend to be first. In short, our leadership in science and in industry, our hopes for peace and security, our obligations to ourselves as well as others, all require us to make this effort, to solve these mysteries, to solve them for the good of all men, and to become the world's leading space-faring nation.

42
Why are there no more manned missions to the Moon?

8
What would be the lightest possible moon launch vehicle?
2
What does it (actually) mean when spacecraft are "intentionally crashed" on the moon?
5
What is the case for human presence on the Moon?
8
Has NASA "gone south"? Why are astronauts needed to explore the Moon's south pole?
10
What is Buzz Aldrin's T.O.R. plan? How does it work?
4
Why are the poles of the Moon in Google Earth so different from other regions?
5
Where to find the full reflectance map of the Moon?
5
Is lunar sample return comercially viable for a private company?
3
Did an astronaut on the Moon ever fall on his back?