A quarter of the world's big telecoms spacecraft are manufactured in Britain, and the new Quantum platform is billed as a next-generation product.

It's fully software-defined, meaning it can be reconfigured in space to meet changing market conditions.

Traditionally, they've been configured in the factory before launch to do very specific tasks in particular markets.

This might mean, for example, transmitting only on certain radio frequencies with shaped antennas to carve out the necessary ground "footprint". But telecoms markets don't stand still, and being able to totally reconfigure an in-orbit platform would allow an operator to adapt to any shifts in the business landscape - without the need to build and launch another bespoke platform.

The operator would simply reprogram the existing satellite. Those antennas could electronically "change their shape", to tailor the bandwidth, power and frequency needs of the new territory to be served.

And this can include very changeable circumstances, such as the evolving communications requirements of aeroplanes during the day as they travel in groups across an oceanic corridor.

Electronic antennas are also more resistant to jamming, making it harder for authoritarian regimes to block the signals, including TV broadcasts, they don't like.

Footprint engineering usually involves deforming the reflector dish to so that the power is distributed on Earth in a special shape, or by adding up to 100 separate feed horns at the focal plane of a large dish for "micro-beams". The former is static, the later offers some flexibility but a the cost of other things.

For more on that see below.

Question: How does Quantum (the Flagship UK telecommunications satellite that was just launched) change either it's antenna's shape or the shape of various beam footprints?

Discussion and images of permanently deformed dishes and shaped beams in the following questions and their answers: 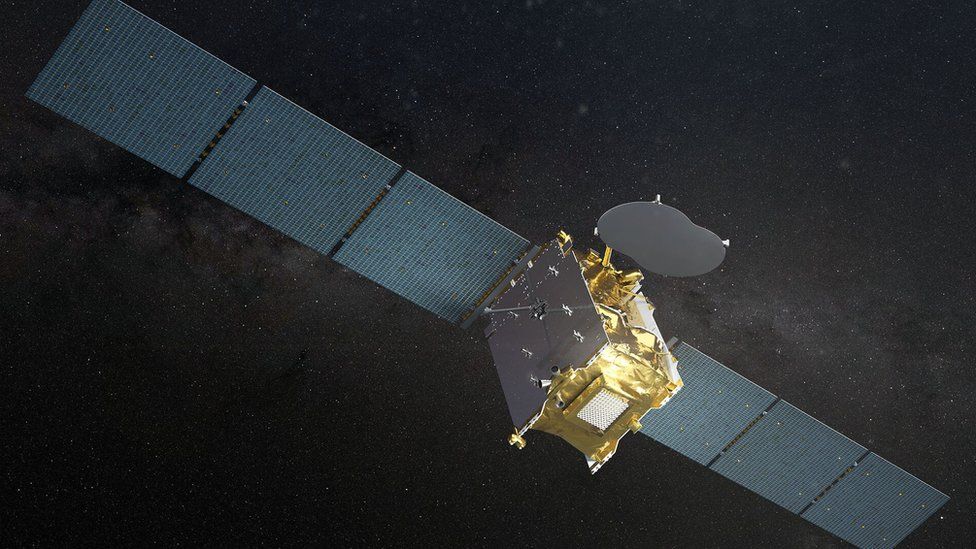 above: Artwork: The UKSA has put £65m into Quantum, UK industry invested £170m below: Manufacturing has been led from Airbus UK and SSTL (images from the linked BBC article credited to ESA)

According to Airbus (who largely built the satellite), the antenna system is called the ELectronically Steerable Antenna+ (ELSA+). ELSA+ is the result of an ESA-funded project.

I have, however, not been able to find any specifics on how it is implemented. I am guessing that information might be a trade secret.

However, this is actually not particularly new or revolutionary technology. If you bought a WiFi AP in the last few years, you probably have something in your home that does the same thing. Military radars have been using electronically steered active antennas for decades.

The two technologies I believe are being employed here, are Software-defined Radio and Smart Antenna, more precisely, smart antennas based on Adaptive Phased Arrays.

The basic idea of SDR is to replace the analog circuitry of a radio with signal processing software. The basic idea of an adaptive array is to combine many small antennas into one larger antenna using software. Neither of these is new, SDR has existed since the 1970s, and can today been done with cheap USB hardware and Open Source software – it was even discovered that some cheap consumer Digital Radio and Digital TV receivers, and even analog sound cards can be (ab)used as SDRs. And as mentioned above, MIMO (transmitting multiple spatially separate beams between a single edge device and AP) and MU-MIMO (allowing the AP to communicate with multiple devices simultaneously along different spatial paths) are essential parts of what makes current-generation WiFi standards so fast.

You can probably see how the combination of the two technologies (an antenna array that can virtually "change its shape" by manipulating the signals going into and out of its constituent mini-antennas, and flexible, upgradable, malleable signal processing software to provide/analyze those signals) indeed allows the capabilities described in the article: to reconfigure the beam at a moment's notice.

As mentioned above, I couldn't find sources for the precise implementation, but given that these are widely-used and widely-available technologies used in consumer, industrial, medical, aviation, maritime, and military applications on the ground, the seas, and in the air, it stands to reason that there is no need to invent something radically different to put it on a satellite. All that was needed was a couple of decades of Moore's Law, until the processing requirements no longer require a house-sized supercomputer with a power budget in the thousands of kilowatts.

Not the answer you're looking for? Browse other questions tagged communication-satellite radio-communication antenna uk-space or ask your own question.

7
Why do these satellite antennas look so weird? (strangely shaped with little white dots...)
8
How do commercial broadcast satellites in GEO produce such carefully shaped signal footprints?

11
How does QUESS, China's quantum communications satellite experiment, relay entangled signals?
4
How many communication antennas does a satellite need if it belongs to a constellation?
8
How do commercial broadcast satellites in GEO produce such carefully shaped signal footprints?
5
How does the Satellite Networked Open Ground Station operate? How is it used?
9
How does Curiosity know how to point and move it's high gain antenna in real time?
3
How often does a geostationary satellite enter into a Lunar shadow?
9
What is the pop-up circular disk with spiral pattern in this NASA animation of the Dragonfly helicopter for Titan? Antenna? Kind, band, target?
7
Why are modern satellite ground station and deep space communications dishes with secondary mirrors almost always Cassegrain?
3
How does the signal strength from the Voyager probe change with distance?