Flyby puzzler; starting from Earth, how many times can you use Jupiter flybys in one century?

Is there any limit to how many times you can increase velocity by repeated sling shot manoeuvres? and its answers have got me thinking, and that's always dangerous.

Suppose you have a durable RTG-powered spacecraft launched from Earth, and your goal is to use Jupiter-only flybys as many times as you can in order to set some sort of record before going off to explore some place further.

We've got to put some constrains on what a "flyby" is otherwise you'd just go into a 5.2 AU heliocentric retrograde orbit and pick up 16 conjunctions per century and call them "distant perturbative flybys".

So to be a flyby, the heliocentric characteristic energy $C_3$ and/or the semimajor axis $a$ have to increase by some factor.

I'll call that factor 10% arbitrarily. If there are profound or compelling answers that have a slightly lower factor they won't be balked-at :-)

Flybys for primarily inclination changes should obtain a similar delta-v to those above in order to count.

Question: This is a flyby puzzler; starting from Earth, how many times can you use Jupiter flybys in one century?

As always with such puzzlers, one need to find something to exploit heavily :)

Flybys for primarily inclination changes should obtain a similar delta-v to those above in order to count.

So as long as an inclination change provides a large enough delta-v, we can keep the semi-major axis constant!

One immediate way of utilizing this is a "bouncing" trajectory, having a large inclination change flyby of Jupiter twice every orbit. In a century, one can fit 17 such bounces (if the initial transfer is quick enough). 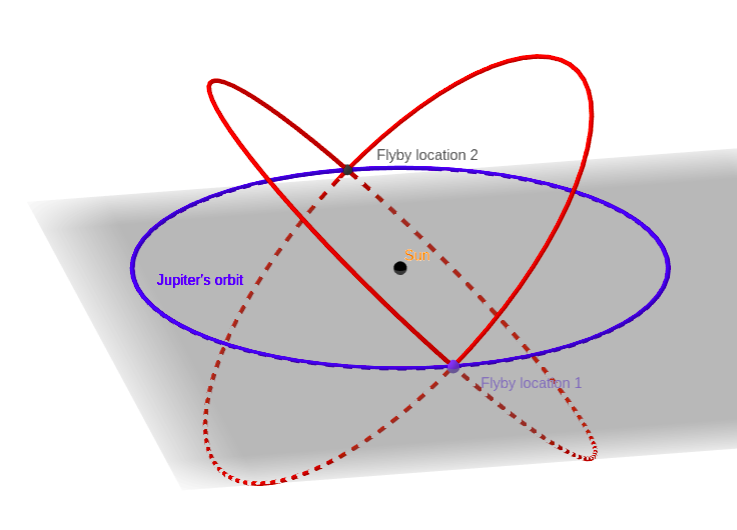 These flybys are hyperbolic trajectories with a perijove above Jupiter's north (or south) pole. Such flybys only mirror the z-component of the entry and exit vectors, preserving heliocentric $C_3$.

This orbit is known as a "reflected backflip", which is discussed in Lunar Cycler Orbits with Alternating Semi-Monthly Transfer Windows by Uphoff and Crouch.

They do however primarily present the "single backflip" trajectory, which itself should qualify for this puzzler, doing 4 flybys for every 3 orbital periods (equivalent to 12 bounces over a century): 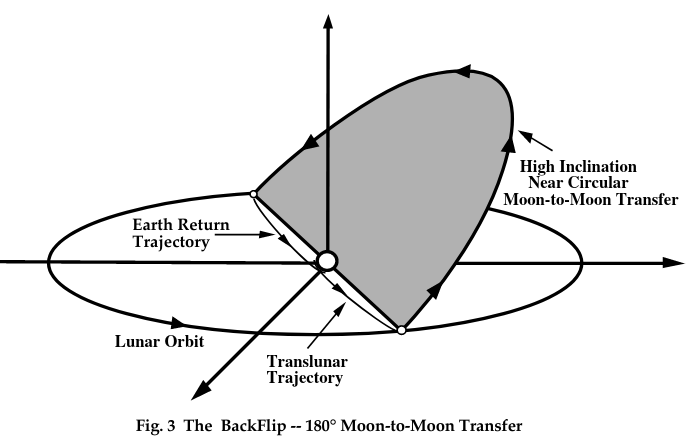 Since this is significantly easier to analyse, I will do so here.

For the planar part to have an orbital period of exactly half that of Jupiter, it needs to have a semi-major axis $\frac{1}{2^{2/3}}$ as large. That's a velocity difference at encounter of 4670 m/s.

We can calculate turning angle by:

Which means the maximum turning angle for 4670 m/s at a perijove of Jupiter's radius is 162 degrees, comfortably more than the 90 degree change required to turn a planar velocity difference into a pure inclination difference.

24
Is there any limit to how many times you can increase velocity by repeated sling shot manoeuvres?
7
Unravelling Cassini's "ball of yarn" orbit around Saturn, tabulation of propulsive maneuvers?

8
Can the direction of a solar storm be predicted near Earth? Will it come from one direction?
6
How can Sun-Jupiter Lagrangian points be used by flyby probes?
2
How can you determine the nature of an object from its flight path angle, velocity, and radius alone?
1
Would a space rocket launching from Ceres in a path to Jupiter be faster relatively to the sun than one launching from Earth?
2
Puzzler; what can we learn about the distance and direction of Earth from this cool SpaceX-tweeted image of Earth and a vacuum nozzle?
3
How can we avoid collisions when moving from one orbit to another?
18
If one Starship can transport 100 people to Mars, how many could it safely land near Mercury's north pole after one Hohmann-like transfer?
2
How does one design a trajectory involving a lunar and Earth flyby and Lagrange points? What tools are used to calculate the initial guesses?