Have "space lasers" really been used to temporarily blind US satellites?

In CNN's video An exclusive look into how Space Force is defending America they talk with Gen. John W. Raymond, Chief of Space Operations, US Space Force.

Narrator: Adversaries have already attempted to use space weapons to temporarily disable US satellites.

They mention "space weapons" which might suggests space-based weapons, but the graphics shows a beam of something originating in eastern Europe or western Asia hitting a satellite in space.

Question: Have "space lasers" actually been used in an attempt to temporarily blind US satellites? Was it a surface-based laser, a space-based laser, both, or something else?

This could potentially be posted in Politics SE instead; they take some questions about international relations, military events and space. But news about lasers and satellites is more likely to be closely followed by users in this community than in that one, for example (sorted by asking date): 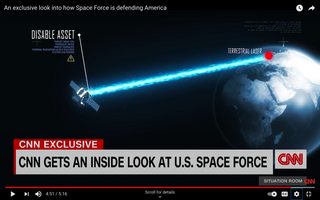 Yes, ground based lasers have been used in an attempt to temporarily blind US satellites.

Fortunately, it was the US that tried it.

During two firings, lasting about 1s and 10s respectively, the 2m- wide laser beam was aimed at the infra-red camera aboard a US Air Force satellite.

The $60 million Miniature Sensor Technology Integration, MISTI 3 satellite, in orbit 416km overhead, was "illuminated", but not destroyed in the demonstration. The laser was built originally for the Strategic Defense Initiative programme in the 1980s. A full-power and longer burst from the laser would have destroyed the craft.

The MIRACL test - the first to be aimed at a target in space, but not the first MIRACL firing - was a demonstration of a potential space weapon, but also an illustration that another nation could use such a device to disarm or destroy US reconnaissance and other types of military satellite. It also provided data on the vulnerability of US satellites in orbit.

Other accounts of the same incident claim it wasn't MIRACL but a weaker laser, but that the satellite's focal plane array was indeed suffused for a few seconds.

Source: Mastering the Ultimate High Ground: Next Steps in the Military Uses of Space This source also briefly touches on the next incident.

Additionally, there were reports in the mid 70's of Soviet blinding attacks on infra-red missile warning satellites. Some said lasers, some said flares from burning gas pipeline leaks. To my knowledge this was never settled publicly.

Not the answer you're looking for? Browse other questions tagged military laser united-states weapon or ask your own question.

10
Is India having the military capability to "take out" a satellite in orbit still in question?
12
How can just making the ground broadcast stronger neutralize a zombie(sat)?
5
What did India's recently tested ASAT vehicle really look like?
7
Does the US Navy guard SpaceX drone ships and make sure bad actors don't abscond with critical technology on the high seas?
5
How to decide if the rocket most recently tested by North Korean is classified as long-range or medium-range launch?
7
How far is Cape Canaveral Air Force Station from Kennedy Space Center, administratively and programmatically-wise?
2
Does (or has) the US military launch anything besides weapons and weapons tests into space themselves?
6
How many of these six military "orbital threat" techniques have been demonstrated in a (more or less) publicly recognized way?
3
Did anything specific happen on the 16 or 22 March 1992 passes of a Lacrosse I surveillance satellite over Tehran?
1
Is 18 Space Control Squadron (18 SPCS) which "detects, tracks, and identifies all artificial objects in Earth orbit" a part of Space Force?
See more linked questions

7
Technological challenges in substituting EO Satellites X-band downlinks with laser downlinks?
4
Have spaceships been tested to withstand bullets?
1
How fast is "Fast Space"?
10
Is India having the military capability to "take out" a satellite in orbit still in question?
33
Was the Space Shuttle ever actually intended for the military to steal satellites without the owner's consent?
5
Using lasers to reach the Karman line
6
How many of these six military "orbital threat" techniques have been demonstrated in a (more or less) publicly recognized way?
0
Does transmitting from a few dishes significantly improve the performance of radar surveillance from Earth at GEO and beyond? If so, how exactly?