What potential Shuttle partner did this blue-and-white flag indicate?

This publicity slide from NASA in 1972 (?), explaining how wonderfully useful and flexible the Space Shuttle would be, has an intriguing image in the lower right. 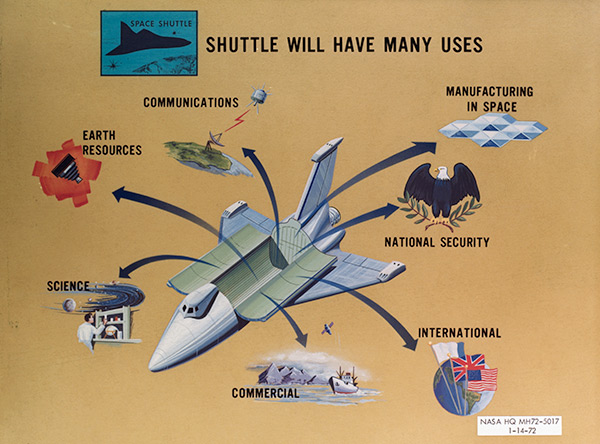 The "international" use is illustrated with a globe showing the US flag, the UK flag, and then a white flag with a single vertical blue bar on the right.

Its an odd selection. As I understand it, the UK had not committed to any kind of detailed partnership in the Shuttle program, and when it did come in, it came through as part of ESA. ESA did not exist in 1972 - its precedessor ESRO did, and was involved in the early Spacelab plans, but I can't work out if it would have had its own flag or not. And again the UK was part of it, not involved independently.

Wikipedia indexes many blue-and-white flags, but none that match this layout.

So: is this one a placeholder? Is it ESRO? Is it someone else who was interested in being a Shuttle partner? And why the UK flag on its own...

There is a 1973 document for ESRO detailing "File: ESRO-728 06/07/1973-27/07/1973 Draft Memorandum of Understanding between NASA and ESRO for a cooperative programme on development, procurement and use of Space Laboratory in conjunction with SPACE SHUTTLE system"

So as early as 1973 there was at least some level of formal cooperation between NASA and ESRO regarding the Space Shuttle Program.

Could not find any sort of a flag for ESRO, but their logo used the same shade of blue-on-white as that flag.

Not the answer you're looking for? Browse other questions tagged space-shuttle history international-politics or ask your own question.

23
What satellites did the Shuttle retrieve from orbit?
4
What did JPL's 1939 lunar lander look like and what practical aspects of landing on the Moon did this engineering design address?
2
Identify this astronaut and shuttle mission
7
Did NASA distinguish between the space shuttle cockpit and flight deck?
8
How did fully-suited astronauts enter the Space Shuttle and sit down in 1 g vertical vs horizontal?
32
What is this large fan in front of the Space Shuttle during Ground Turnaround?
4
What is this font used in Apollo / early Shuttle NASA documents? (possibly OT)
4
How did the atmospheres of Soyuz, Shuttle, Mir, and ISS compare?
4
How did three 1.2 meter spheres and a Xe+ plasma contactor keep the Shuttle "grounded"? What did they look like?