If the Kuiper belt is only about 50 AU thick and Voyager 2 is 153 AU away then it has to be in the Oort cloud?

Kuiper belt is 50 AU thick....correct? Oort cloud touches Keiper belt....correct? Neptune is 31 AU away. That means Voyager 2 at 153 AU is beyond the Kuiper belt So where is it??

That said, there are some astronomers who argue that the three most distance objects found to date are Inner Oort Cloud objects rather than detached objects. (There are other astronomers who disagree.) What this means is that the Kuiper belt objects, the scattered disk objects, the detached objects, and possibly the Oort Cloud objects are do not occupy distinct regions of space. They are instead classifications of objects that orbit beyond Neptune, and these different classifications overlap in terms of the regions of space in which they orbit. 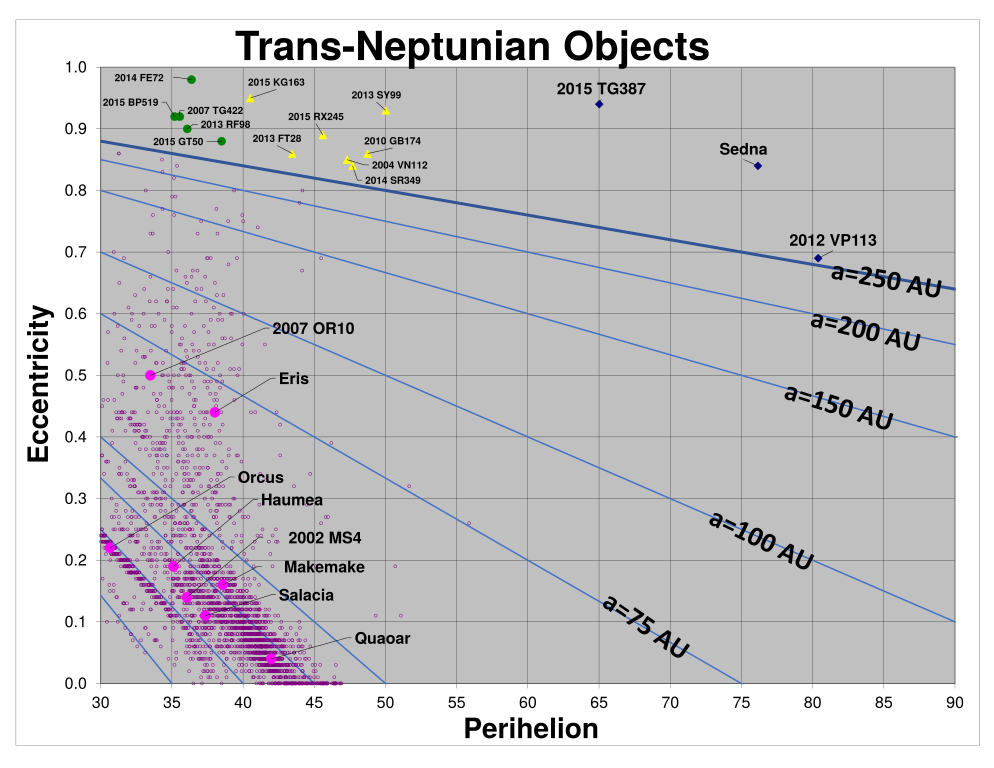 I'll look at three objects, two of which are labeled in the diagram and one of which is not.

What to make of these three objects? Nobody classifies 1996 TR66 or even 2014 FE72 as Oort Cloud objects. There are some astronomers who do want to classify 2015 TG387, along with the other sednoids, as Oort Cloud objects. There are others who do not. (Aside: To me, science where scientists agree to disagree represents science at its most interesting points in time.) One thing both groups do agree on: They hope very much that the James Webb Space Telescope will successfully launch, deploy, make its way to its planned halo orbit about the Sun-Earth L2 point, and collect data throughout its ten year expected lifespan.

Voyager 2 is indeed outside the usually understood limits of the Kuiper belt. (About 50 AU, but typically defined as being in resonance with Neptune).

That puts it in the scattered disk, but not as far as the Oort cloud. The beginning of the Oort cloud is typically set to 2,000 AU.

All these regions are sparsely populated with small icy bodies, which the Voyagers are not able to observe.

72
When will New Horizons overtake Voyager 1 in distance from the Sun?
11
Why did we send those golden records on Voyager crafts?
7
Any evidence for a KBO fly by from one of the Voyagers or Pioneers?
10
Is Voyager 2 capable of proving the existence of Oort cloud?
21
If a Voyager crashes into something, would we know?
18
Where will the Pioneer, Voyager and New Horizons spacecraft be after one galactic orbit?
29
Could one of the interstellar probes discover Planet IX by accident?