I have been going over a bit of a thought experiment in my head lately. And wondering if someone more informed on the matter can share their thoughts

Let's start with the premise that rocket/ propulsion technology is continuing to develop at some sort of rate. Not exponentially, but it would be logical to assume that in 100 years rockets will be faster than they are today (minus any doomsday scenario).

Let's say that starting today, we start sending a rocket to or closest star- Proxima Centauri every 50 years.

So until we reach a speed threshold (e.g speed of light), it would be pointless sending multiple rockets to one star, since no matter what, people in the future will arrive there before you.

Does this logic make sense? Has anyone thought of this before?

Yes, it's been considered. In the literature it's known as the "incentive trap".

There are a couple of academic papers on it, notably Andrew Kennedy's 2006 Interstellar Travel - The Wait Calculation and the Incentive Trap of Progress and René Heller's Relativistic generalization of the incentive trap of interstellar travel with application to Breakthrough Starshot, but the idea is pretty old, going back at least to van Vogt's story Far Centaurus from 1944.

According to a comment on another question on the site, Robert Zubrin suggests a 50-year rule of thumb: if you're contemplating a space journey of 50 years or more, you should wait for the technological improvements instead.

The "money shot" in Heller's paper is this graph, appearing to show exponential increase in top speed with time: 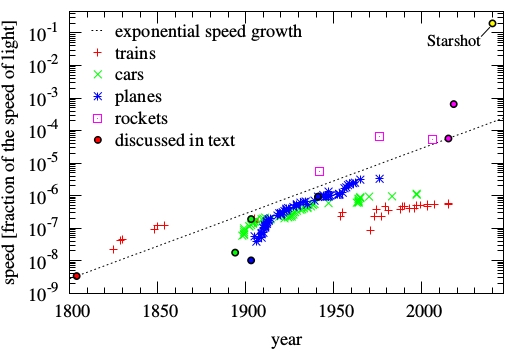 However, I'm not convinced by this plot. The dotted "fit line" relies on both data from early 1800s trains and modern rockets.

For the technologies with a lot of data points on the plot (i.e. the cars in green and aircraft in blue), the "sub-curves" they describe show a rapid initial increase followed by a steep rolloff on the log scale -- i.e. linear progress. It's only when entirely different modes of travel appear that we get the overall exponential progress, and it's not clear if there are additional "modes" of travel to be found. (Various nuclear, nuclear-kinetic, and fusion engines would continue the performance advances of the rocket mode, but would not constitute a new mode.)

And in fact, there is not, has not ever, and will never be any such thing as eternal exponential growth in any domain, despite a whole lot of Nearly Very Smart People pointing to things and saying "it's exponential!" over the last several decades. What we have a lot of examples of is sigmoidal growth, which looks a lot like exponential growth early on.

If you accept the premise of continuous exponential increase in travel speeds, you can work out at what point you should start your journey to Proxima to get there soonest, but that's a theoretical fantasy. Kennedy's estimate for a 6 light year journey to Barnard's Star, a little further than Proxima, was to start in 635 years and make a 145-year trip at 4% of the speed of light.

Not the answer you're looking for? Browse other questions tagged interstellar-travel spacecraft-development velocity speed-of-light or ask your own question.