Have various lunar rovers known their own position on the Moon? If so, how?

Given that there is no satellite navigation on the Moon, have lunar rovers figured out their current location on the surface of the Moon? If so, how?

For the ones that have, did they send pictures back to Earth via their lander to be examined? Have there been other methods?

Except for Curiosity and Perseverance, rovers haven't had sufficient processing capability to implement navigational autonomy in order to make any use of "knowing" where they are.

Curiosity and Perseverance do have actual knowledge of their locations on the planet both from navigation and odometry information they gather locally, and by regular updates from Earth. These are used, along with ephemeris information to time communication links to satellites orbiting Mars and to time and point their high gain antennas correctly towards Earth for direct rover-to-DSN links.

Very Long Baseline Interferometry (VLBI) from Earth can locate an object on the Moon to meter precision. This was developed using the static ALSEP transmitters left there by Apollo landing missions.

VLBI on the Apollo crewed rovers?

I do not yet know if this was done. I have a hunch that it would have been tried.

The Chang’e 3 lunar lander landed on the Moon on 14 December, 2013, as part of Chinese Lunar Exploration Program (CLEP). VLBI was used to track the Chinese Chang’e 3 lander during its landing sequence and after landing; in addition VLBI was used to determine rover-lander relative positions on the lunar surface. The relative positions of the rover were determined at the meter level and the absolute position of the lander to within about 10 meters. Chang’e 3 was also observed in geodetic VLBI experiments under the IVS OCEL (Observing Chang’e-3 with VLBI) Research and Development project. Note that the OCEL observations were inserted into conventional geodetic observing sessions and did not hamper their geodetic use.

Same-beam very long baseline interferometry observations were performed between the rover and the lander of Chang'E-3 and differential phase delay data were obtained with the minimum random error of about 0.03 ps. These data were used to monitor the rover motions, as small as several centimeters, including movement, turning, and attitude adjustment. The relative position between the rover and the lander was precisely measured with an accuracy of 1 m, which is an improvement of 10 times compared with that of the Apollo project. 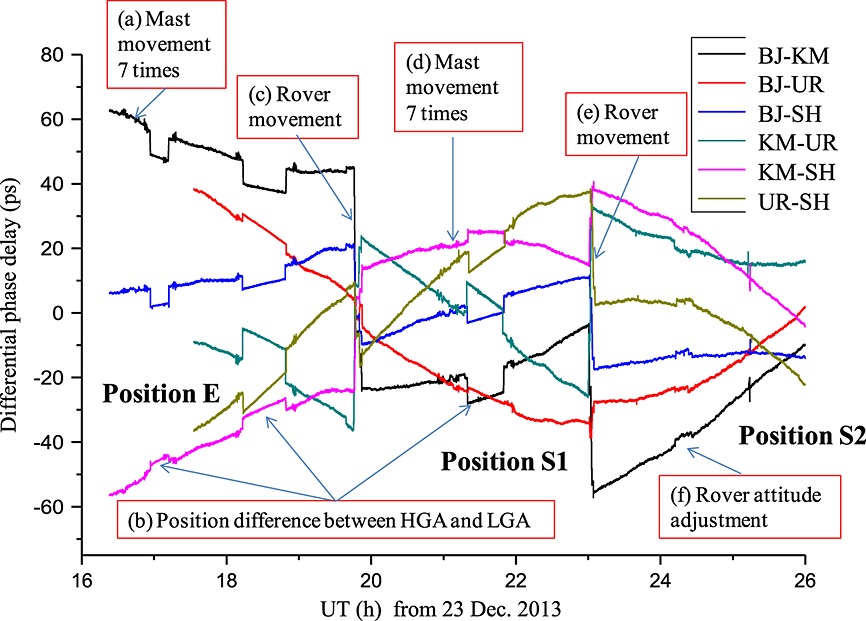 Differential phase delays on six baselines and their changes resulting from various movements of the rover.

We present results from the analysis of observations of the Chang’e 3 lander using geodetic Very Long Baseline Interferometry. The applied processing strategy as well as the limiting factors to our approach is discussed. We highlight the current precision of such observations and the accuracy of the estimated lunar-based parameters, i.e., the lunar lander’s Moon-fixed coordinates. Our result for the position of the lander is 44.12193∘N, −19.51159∘E and −2637.3 m, with horizontal position uncertainties on the lunar surface of 8.9 m and 4.5 m in latitude and longitude, respectively. This result is in good agreement with the position derived from images taken by the Narrow Angle Camera of the Lunar Reconnaissance Orbiter. Finally, we discuss potential improvements to our approach, which could be used to apply the presented concept to high-precision lunar positioning and studies of the Moon.

Not the answer you're looking for? Browse other questions tagged the-moon rovers navigation position or ask your own question.

13
Did the Curiosity and Perseverance rover brains do the driving from Earth to Mars?
5
Is there a way (working or in development) to track satellites in lunar orbit like we track objects in Earth Orbit?
7
Why were the "perfectly functioning" seismometers placed by Apollo 12, 14, 15 and 16 astronauts all shut off in 1977?
4
Has the Curiosity rover ever communicated directly with Earth via its high-gain antenna? Signal strength & data rate?
8
How does Curiosity know how to point and move it's high gain antenna in real time?
4
Alternative to GPS navigation for vertical landing, especially on other planets
7
Were there any policies or technical reasons for powering down all Apollo ALSEPs in 1977?
2
What is a gyrocompass and how might one be used by a planetary rover?
5
Were the Apollo lunar ALSEP transmitter signals ever analyzed or used after the experiments were shut down?

12
How feasible would it be to move the ISS to the surface of the Moon to recycle its components in future?
21
How did astronauts navigate the Lunar Roving Vehicle (LRV) over the surface of the Moon?
36
How did the Apollo 11's Eagle ascent stage find the CSM after leaving the Moon?
30
Why weren't Saturn V and the Soviet N-1 Moon rockets made larger in order to simplify Lunar missions?
2
Have there been long-term observations of the effects of lunar exposure to equipment?
1
Have lunar (or martian) rovers exploited shadows, perhaps for terrain comprehension or obstacle avoidance?
4
How to estimate that receiving GNSS signals Earth while orbiting the Moon will still provide locations to about 200 meters of uncertainty?
3
Lunar satellite navigation system