Are there accomodations for blood transfusion (could/may be rare cases) on crewed space missions? That is, facilities for storing blood bottles for transfusion matching the blood group of astronauts. Wikipedia's space medicine doesn't seem to say either way. 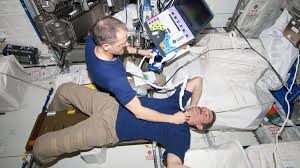 It is possible the relevant instructions and equipment are not included in publics lists for various reasons but it is more likely that assessment of the likely injuries on the ISS and the costs involved in supplying multiple blood types of ~30 day shelf life and only when carefully temperature controlled.

Cargo to ISS is infrequent, costing thousands of dollars per kg and not normally refrigerated, so fresh blood would involve more frequent launches and extensive customization of the craft noting power and heat dissipation needed (just packing in dry ice will not fly, literally). There would also need to be safe disposal of non trivial quantities of stale blood every month, where the ISS has occasionally had issues with downmass.

The second element is the actual use for transfusion following injury. For most of the relevant period the ISS had a crew of three, so the assumed action on injury in the linked documents appears to be to stabilise the patient as much as possible and return with hours. While it is possible to die from blood lose in this time frame, the question would be which injuries the surviving two crew could do something useful about with the skills and equipment to hand in the additional time.

It does appear at some point between 2000 and 2016 the on orbit inventory grew to include saline IV solution and equipment to access the bone marrow of the leg to supply it. Saline has a near unlimited shelf life, does not need type match and while not as effective will still sustain circulation in the short term.

Possibly also relevant here is likely injuries - in 0G falling or being fallen on is unlikely, and fire and explosion hazards are rigorously minimised, making the possible events that badly maim a crew member but does not also expose them to space rather limited.

I suspect that if monthly launches of refrigerated cargo was being done most ISS crew would prefer fresh vegetables to blood.

In terms of future space exploration, once your crew size goes past six it becomes rather more likely you will have compatible blood types and the specialized skills to allow collection of donor blood in situ, though hopefully the possibility of injury will remain low through careful engineering.

Crewed space missions are very unlikely to need transfusions. Most people will never need a transfusion during their lives. And if they do, it will likely be when they are elderly. Most transfusions are for cardiovascular surgery, transplant surgery, during cancer treatment or for complications of pregnancy.

Since the above conditions are unlikely to apply to crewed space missions, about the only indication for blood transfusion aboard a space craft is hypovolemic shock (low blood volume) following traumatic blood loss.

Fatal hypovolemic shock occurs with the loss of 2 liters of blood (40% of total blood volume). Of that lost volume, just under half is red blood cells and the rest is clear plasma. It is natural to assume the red stuff is more important. But in terms of treatment, the essential thing is to replace lost volume. Red cells are good, but optional. The other 60% of the remaining blood, if diluted to maintain volume, can provide ample oxygen carrying capacity.

What therapies are available to maintain intravascular volume following hemorrhage?

Not the answer you're looking for? Browse other questions tagged crewed-spaceflight medical or ask your own question.

5
Has an IV even been performed or attempted in space?

20
Do astronauts aboard the International Space Station (ISS) actually use their legs?
18
How do astronauts battle loss in blood volume in microgravity?
2
With current or near-future projectable technology, how long would it take a ship to fly from Earth to a theoretical Earth-Sun L4 or L5 space station
5
Has an IV even been performed or attempted in space?
2
Will astronauts on the way to mars do experiments like in orbital labs?
3
Space astro/cosmo-naut rejection due to fine veins
11
Does NASA police urine production by astronauts?