What will (likely) be the first separately-orbiting coronagraph to be deployed in space?

Traditionally a coronagraph is something that blocks the bright disk of our Sun to make it easier to image the much dimmer corona. The first coronagraph is of course the Moon; during a solar eclipse it blocks the Sun and those who cautiously glance up at it during totality can see the corona.

Schemes to directly image exoplanet systems usually (always?) need at least some coronagraph-like functionality to block the star's light in order to image the planets that orbit it.

This usually happens within the telescope, often at an intermediate focal plane.

But space telescopes offer the possibility of the old-fashioned eclipsing coronagraph. The same way that our Moon just nicely blocks our Sun, and independent spacecraft several to several thousand kilometers away from a space telescope could eclipse the disk of another star, allowing for imaging of the exoplanet system around it.

Question: What will (likely) be the first separately-orbiting coronagraph to be deployed in space?

For an example of advanced coronagraphs integral to space telescopes, see

For an example of a separate coronagraph or "star shade", see

Results of a conventional coronagraph integrated within a space telescope, from How (the heck) does SOHO's SWAN camera image the entire 4π sr celestial sphere?

Below: From This answer to What is this white dot and strange line in SOHO image? Yes those are the Pleiades whizzing past the Sun! 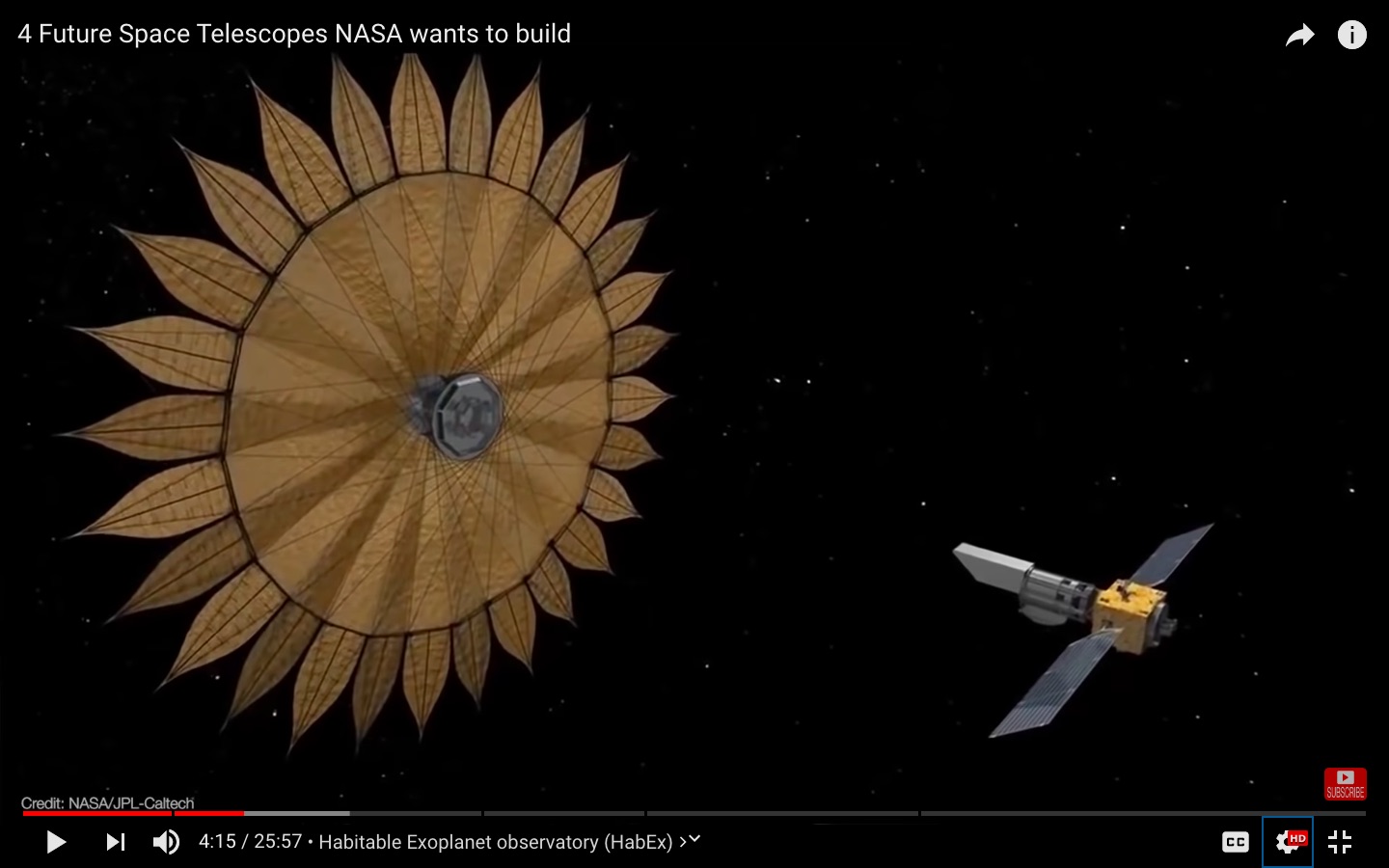 While the complete answer you are looking for would no doubt discuss near (hopefully!) future space telescopes, the "spaceflight firsts" record may already have been claimed in 1975.

Undocking and Separation: The Apollo and Soyuz spacecraft undocked at 95:42 GET (8:02 am EDT July 19, 1975). While the spacecraft were in station-keeping mode, the crews photographed them and the docking apparatus, transmitting the pictures live on TV to earth. The Apollo spacecraft then served as an occulting disk, blocking the sun from the Soyuz and simulating a solar eclipse the first man-made eclipse. Leonov and Kubasov photographed the solar corona as the Apollo backed away from the Soyuz and toward the sun. The two spacecraft then redocked at 8:34 am EDT with the Apollo maneuvering and the Soyuz docking system active while good quality TV was transmitted to earth. The second docking was not as smooth as the first because a slight misalignment of the two spacecraft caused both to pitch excessively at contact.

So the first separately-orbiting coronagraph would seem to be the last Apollo spacecraft launched, with the observing telescope being Soyuz 19.

I'm looking for those photos.

Not the answer you're looking for? Browse other questions tagged space-telescope exoplanet spaceflight-firsts or ask your own question.

6
What is this white dot and strange line in SOHO image?
2
How (the heck) does SOHO's SWAN camera image the entire 4π sr celestial sphere?

7
What was the first animal sent into space?
4
When was the first commercial delivery to an orbiting space station?
3
What was the first space tourism company?
18
What's the largest aperture telescope sent beyond the Earth-Moon system?
2
How will "precision formation flying" likely be first demonstrated?
9
Why the thermal imaging of Mercury's surface requires a telescope on a jet flying through an eclipse?
2
What causes these cross-shaped artifacts in TESS' first images?
1
can we estimate the number of habitable planets within a specified distance from Earth?
10
What might the first deep space telescope using the Sun or Jupiter as a gravitational lens be like?
2
Why a polar orbit for TWINKLE?