What are these squiggly lines in Jonathan McDowell's tweets about Yunhai-1?

Anton Petrov's new video Another Satellite Collided in Space, But Everyone Missed It Until Now (below) is fun to watch, and links to Jonathan McDowell's tweet string which begins

Space-Track catalog updated today with a note for object 48078, 1996-051Q: "Collided with satellite".
This is a new kind of comment entry - haven't seen such a comment for any other satellites before. Let's look a bit closer:

37 debris objects (green) have been cataloged so far from the breakup - there are likely to be more. This looks to be the first major confirmed orbital collision in a decade. 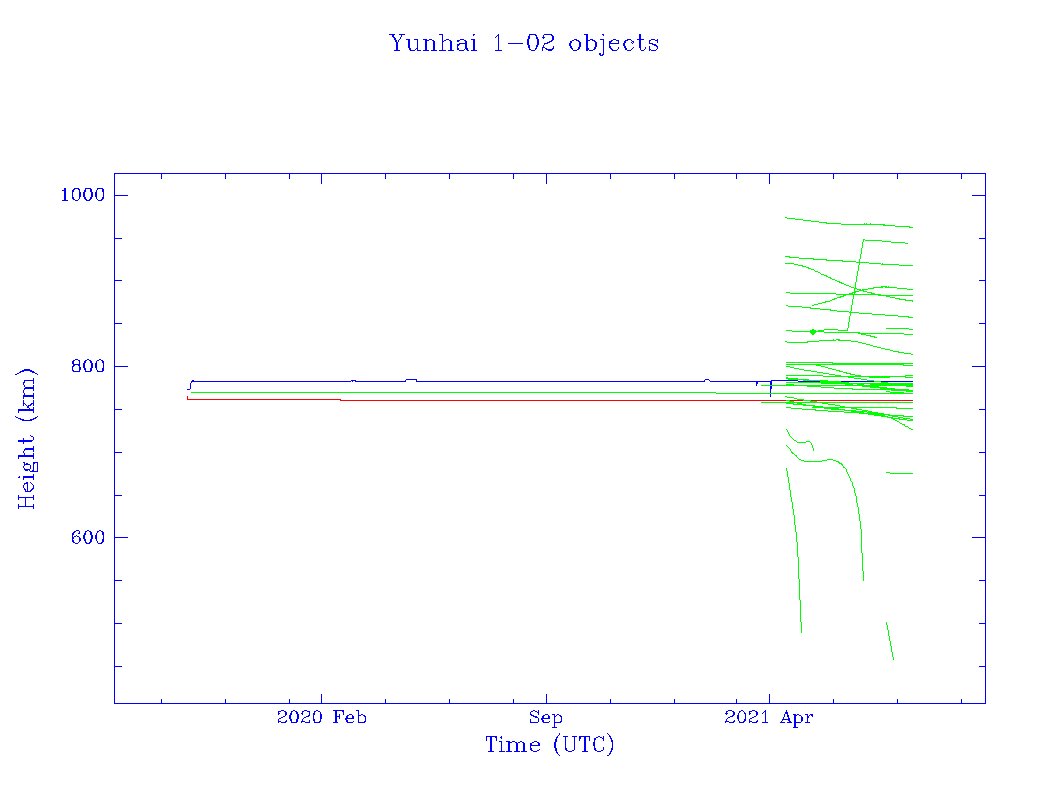 Nevertheless it appears that the Yunhai satellite is still under control and able to make orbit adjustments (blue dots) so the collision was not catastrophic? 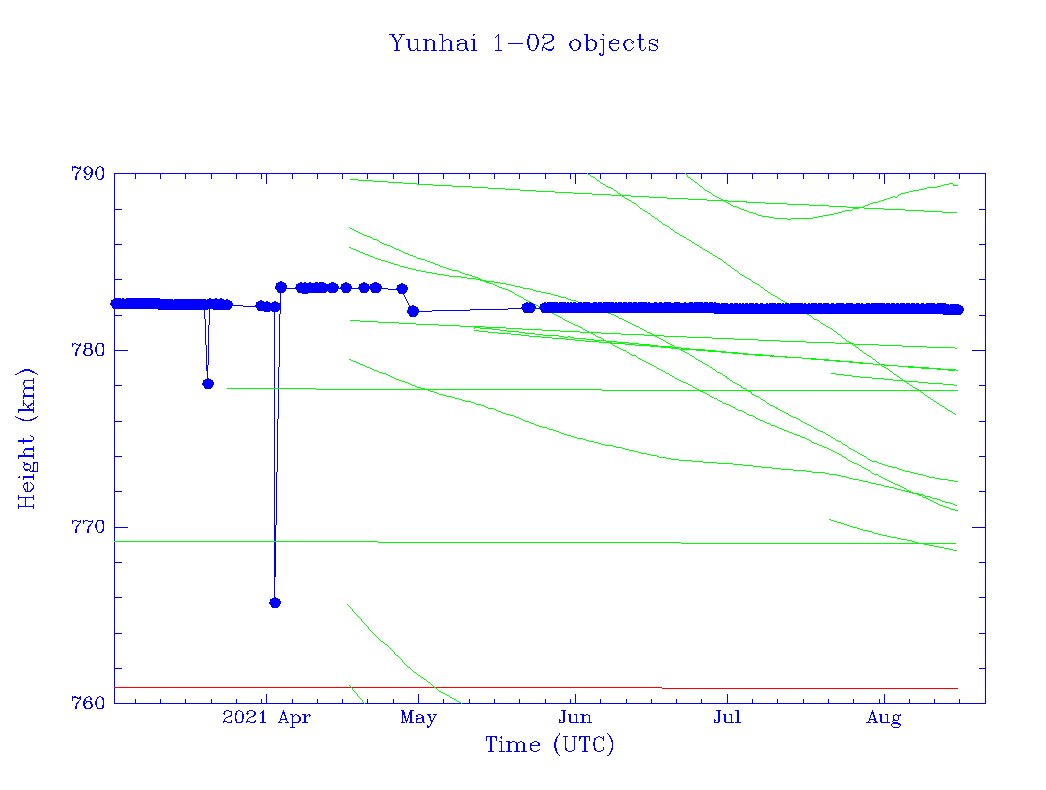 show a cluster of green squiggly lines from April through August 2021 that seem to be somehow associated with a conjunction event involving Yunahi-1.

What are these green squiggly lines? What do they mean?

37 debris objects (green) have been cataloged so far from the breakup - there are likely to be more.

the most obvious interpretation is that the green lines represent the altitude vs time of the fragments. The blue line corresponds to the altitude of Yunhai 1-02 (which shows its in-orbit maneuvers after the impact in the zoom in second chart).

I don't know what the red line means. 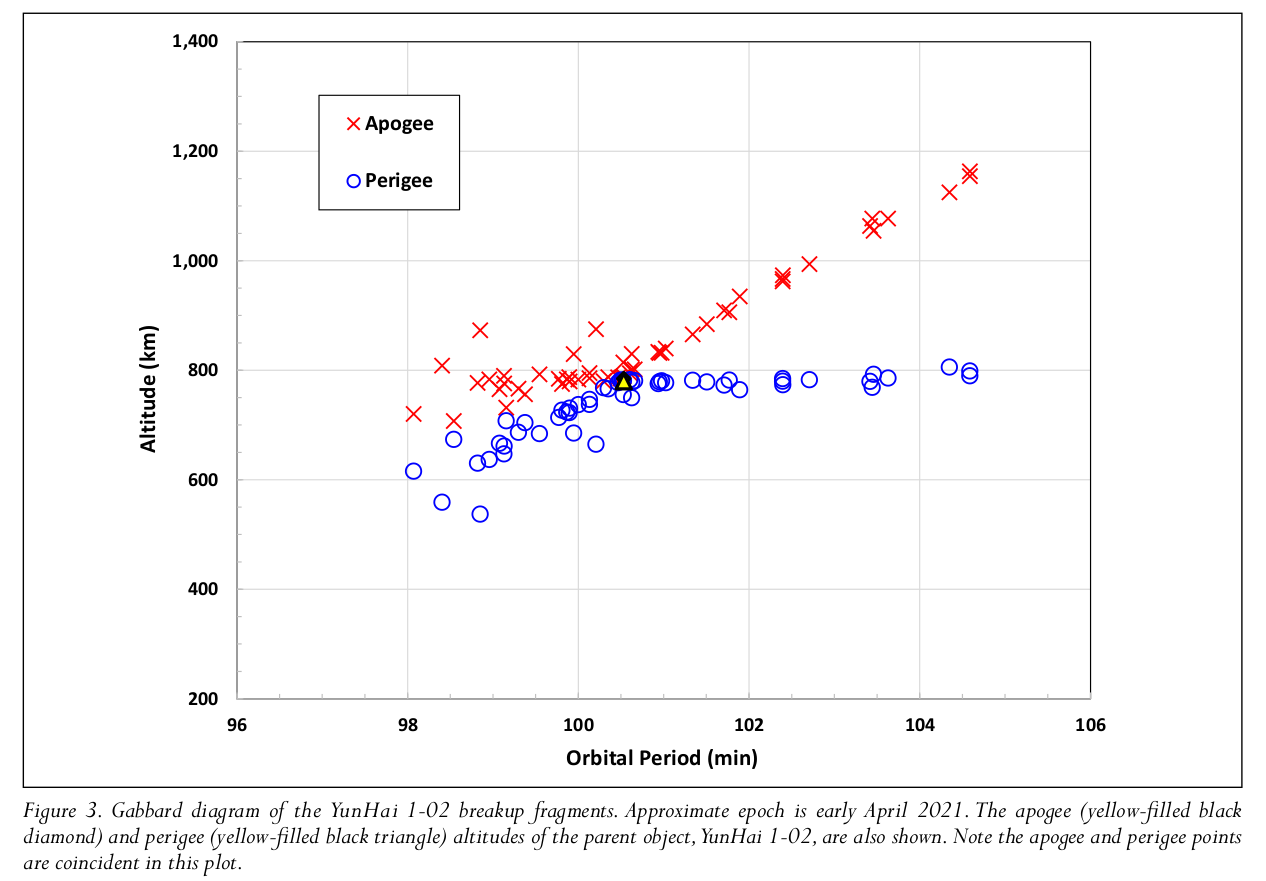 Somebody familiar with in-orbit collision may be able to correlate the two sets of data.

Not the answer you're looking for? Browse other questions tagged low-earth-orbit identify-this-object impact mission-anomaly conjunction or ask your own question.

13
What are these air-vent-like structures on this satellite?
5
What are these discs on the Crawler-Transporter?
21
What are these things fired away from a ballistic missile at launch?
9
What are these stacked panels on the ISS in this image?
2
What are these giant NASA boxes?
13
What are these circular spots on these Ariane V SRB nozzles?
1
What cubesats are these, what flags are on them, and why? What's the background story?
2
What does "MSR" represent in the context of this predicted satellite conjunction?