How hot do the nose cones of fairings actually get on ascent?

I've been reading into aerodynamic heating of rockets, and it's seemingly a rather complicated topic. It's relatively easy to calculate the stagnation temperature at a given mach number, and that is predictably high at the near-orbital velocities seen late in ascent.

However, as the poster there points out, due to the thin atmosphere during this portion of ascent, just because the stagnation temperature of the mentioned Delta IV might be 6000 degrees kelvin, does not mean that the Delta's actual payload fairing reaches a surface temperature of 6000 degrees kelvin - it clearly does not. Additionally, I can imagine that the nosecone may act as somewhat of a heat sink, without ever reaching a steady state temperature, given that the ascent is relatively short.

Obviously, a more complete solution here would involve computing, from this stagnation temperature, the heat flux into the fairing throughout the flight, accounting for varying atmospheric density and velocity over the flight profile, and then modeling heat transfer away from the fairing inside the vehicle to determine the temperature versus time throughout the flight. However, I'm not sure how this would actually be done, or what values would need to be known to calculate this.

I've found plenty of specs for the allowable heat flux onto the payload after deploying the fairing (the standard, it seems, is 1135 W/m2), but not any information on the temperatures the fairing itself reaches before it is deployed. Judging by the fact that fairings appear to usually be constructed of aluminum or carbon fiber and survive ascent just fine, I cannot imagine that this temperature is especially high, but I do not know what that temperature actually is.

As such, my question is more one of real-world data - how hot do real fairings actually get? I have to imagine this has been measured and is known somewhere, but if so, I cannot find it.

I found some experimentally predicted (not in-flight measured) fairing skin temperature plots for an Atlas/Centaur mission. 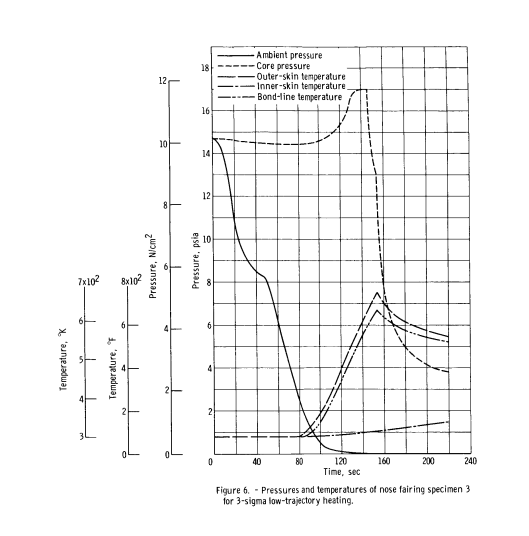 See the paper for details, but the peak outer skin temperature was around 600-700 K.

Not the answer you're looking for? Browse other questions tagged aerodynamics temperature fairings heat or ask your own question.

16
How strong and "hot" is the wind on the payload after the fairing is deployed at ~110km?

4
Do the size of rocky planets determine how hot they are inside?
8
Why are the nose cones of current spacecraft less pointy?
16
How strong and "hot" is the wind on the payload after the fairing is deployed at ~110km?
4
How far apart do both SpaceX half fairings splash down?
6
How do ships catch fairings? Can fairings steer or do the ships do all the work?
2
Where does a Falcon-9 get the hottest during launch, and how hot does it get? (aerodynamic heating)
15
How hot do rocket engine nozzles get?
4
How does a radiator work fast enough on a space craft?